American Kompromat: How the KGB Cultivated Donald Trump, and Related Tales of Sex, Greed, Power, and Treachery, by Craig Unger (@craigunger ), published by Dutton in 2021 The Mueller Report had one objective: To find out if the Trump for President Campaign colluded with the Russian government to interfere in the 2016 U.S. presidential elections. The report was inconclusive. Attorney General William Barr didn’t think it mattered since the chief executive can’t be prosecuted. Donald J. Trump called it “complete and total exoneration.”

It was the wrong question. The right question appears on page 10 of American Kompromat, Craig Unger’s sequel to House of Trump, House of Putin:

“So, is Donald Trump a Russian asset? Yes.”

The FBI opened a counterintelligence investigation code named “Crossfire Hurricane”on July 31, 2016, to determine if Donald J. Trump was acting as an agent of the Russian government. It was rolled into the Mueller Investigation. When Mueller left, it was not included in The Mueller Report. Rather, it was handed off to District offices for further investigation. The evidence and conclusions have never been made public.

But the answer to that question is right in front of us, in the form of Craig Unger’s two books, which make the unassailable case that Donald J. Trump has been cultivated by Soviet and Russian leaders since he first bought hundreds of possibly bugged TV sets for New York’s Grand Hyatt Hotel in 1980. It was the start of a beautiful and very special relationship. 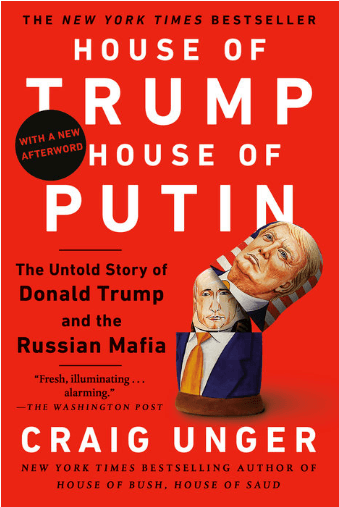 House of Trump, House of Putin, chronicles Donald Trump’s growing ties to Russian mobsters, money launderers, arms merchants, and swimsuit models. Real estate transactions are intentionally the Achilles’ Heel of the U.S. financial system, allowing dictators and oligarchs to plunder the wealth of their people and pile it into condos at Trump Tower, Trump golf courses, and other Trump projects.

How many condos? Unger relies on the legwork of Buzzfeed reporter Thomas Frank to arrive at 1,300 condos sold for cash during the years 1980-2016. Billions and billions of dollars have been laundered through real estate transactions with Trump in the middle.

Naturally, Trump fell for the flattering invitation to visit Moscow in 1988 at the expense of the Russian State for the purpose of building Trump Moscow, a highrise luxury hotel, across the street from the Kremlin, something Craig Unger’s KGB contacts think is so ludicrous only Donald Trump could have fallen for it.

Yes, Trump stayed in bugged hotel rooms. Yes, he was offered beautiful women on a 2013 trip to Moscow, a fact corroborated by Keith Schiller, his bodyguard at the time. There probably are videotapes, compromising photos and recordings. This is where Donald Trump learned the importance of collecting compromising material on powerful people. He learned the methods, too. He realized that luxury housing, golf courses and resorts that appeal to the rich and famous can be used to collect information about the rich and famous.

It’s at this point that Unger’s second book kicks in. It weaves together with the Trump saga another saga taking place across the Atlantic: the Robert Maxwell saga, the disgraced billionaire triple-spy who died mysteriously off his yacht, the Lady Ghislaine, named for his youngest daughter, in the Canary Islands in 1991. Maxwell had mastered the art of using underage girls to get compromising material he would use for blackmail or sell to Russia, Israel, or U.K. intelligence services.

Now take sleazy Maxwell, scumball Epstein, slime mistress Ghislaine, and add narcissist Trump, and you have the ugly center of Unger’s new book. How bad is it? You will want to wash after every chapter! When Trump sees what Epstein and Maxwell are doing, he decides to go into the girl business, too. He buys three beauty pageants, Miss U.S.A., Miss Universe, and Teen Miss U.S.A. Trump thinks that comes with ownership of the girls, too. In 1999, he started Trump Model Management to lure more young women for his oligarch-satisfaction business. It wasn’t closed until 2017. Here’s Craig Unger:

According to [Jeffrey Epstein’s bookkeeper, Maritza] Vasquez, Epstein saw Trump Model Management as a prototype to emulate while working with [Jean-Luc] Brunel to lure minor children in to participate in sexual activity for money. After all, if you were looking for success in the world of sex trafficking, what better role model than Donald Trump? Epstein wanted MC2 to use the same system of incentives that drove “model scouts” and models at the Trump agency.

Trump connected his pageants with overseas pageants and modeling agencies being run by pedophile procurers the world over. Between Donald Trump, Jeffrey Epstein, Jean-Luc Brunel, and others, underage girls were flying around the world to satisfy the needs of hard up moguls everywhere: on yachts, on islands, in penthouses, on golf courses, and in luxury hotels. Jeffrey and Ghislaine were there to record all the glamour and depravity.

Just when you think it can’t get worse, in comes Vladimir Putin and the FSB to follow the “excellent Russian prostitutes” around the world and film their exploits. Now we have Vladimir and Donald and Jeffrey and Ghislaine all working one long, elaborate grift involving money laundering, sex trafficking, and blackmail. Finally, the girls themselves are trained to locate, photograph, and steal documents or other valuable material during “massage sessions.”

When Jeffrey Epstein was investigated by Palm Beach Police in 2005, prosecutors gained possession of hundreds of Epstein’s video tapes. Unger notes, “the FBI found more than three dozen girls who had been underage, some just 13 years old, whom Epstein had molested in Palm Beach between 2001 and 2005.” Palm Beach County Sheriff’s deputy, John Mark Dougan, claimed to have copies of the Epstein videos before he fled to Moscow in 2016. That means Putin also has these videos.

Donald Trump has laundered billions of dollars, has assaulted dozens of women, has blackmailed people with his trove of kompromat, which now includes whatever Russia is willing to share on Trump’s enemies, yet he still faces no repercussions. He obviously has something on people like William Barr, Mitch McConnell, and Lindsey Graham, and Unger explains some of these connections. What explains Trump not being on trial for sexual assault or trafficking minors?

Merrick Garland, if confirmed as Attorney General, will take charge of the Department of Justice and inherit the hundreds of Jeffrey Epstein videos seized by the FBI in 2005, videos which supposedly include kompromat on former President Trump and his associates, videos that Vladimir Putin likely has copies of. In his confirmation hearing, February 22, 2021, Garland said of the botched prosecution of Epstein, “This is just horrendous. He obviously should have been vigorously prosecuted substantially earlier.” Will Garland release the videos and prosecute the perpetrators? He has a living witness in Ghislaine Maxwell, currently in a Brooklyn jail and anxious to get out.