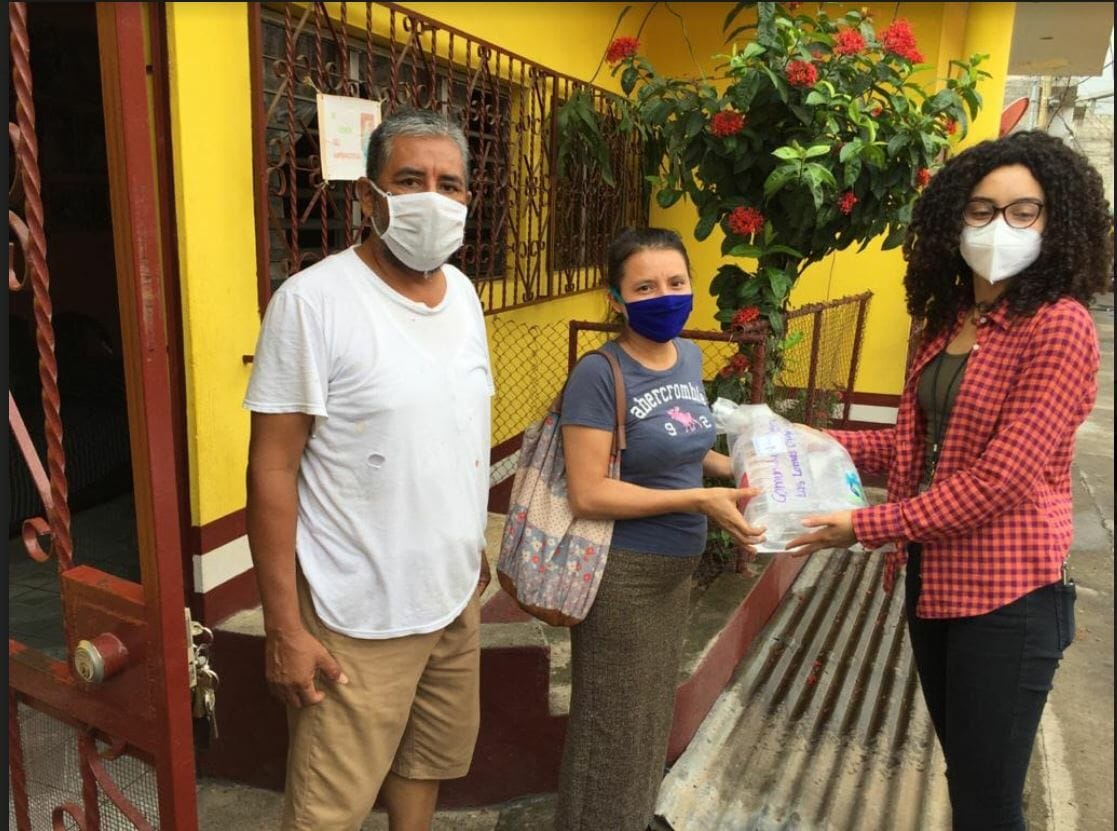 As the effects of Covid-19 continue to be felt unequally around the globe, Indigenous peoples, such as the Xinka in Guatemala, are finding ways to organize and care for each other, while firmly rooting their response in ancestral practices that have sustained them throughout time.

The Xinka people mostly live in southeastern Guatemala, in the municipalities of Santa Rosa, Jalapa, Jutiapa, and Escuintla. Since the time of Spanish colonization, the Xinka have fought to protect their land and culture. Today, they continue asserting their rights to self-determination, to fight for recognition from the Guatemalan government, and to resist transnational mining companies set on extracting large amounts of silver from their territory, which hosts one of the largest-known deposits in the world.

The list of challenges they face — along with millions of other Guatemalans — is long. Already-high rates of malnutrition are climbing as food insecurity worsens. Public hospitals are collapsing under the weight of Covid-19. The national government is using the military to enforce a daily 4 pm country-wide curfew and criminalizing the many Guatemalans forced to break it in order to feed their families. And while all public transportation is still prohibited and food markets restricted, resource extraction has been deemed an essential service, putting at further risk the health of communities who have long fought to protect their lands from mining. Their tenacious organizing in their communities and in the courts is the only thing keeping resource extraction at bay, whose operations would otherwise go unhindered during this global health pandemic.

An uncertain future for the Xinka consultation on the Escobal mine

When the Guatemalan government closed the country’s borders in March 2020, the Xinka were almost two years into one of the most important processes for the reclamation of Indigenous rights in the country: a court-ordered consultation with the Xinka to determine the future of the Canadian-owned Escobal mine. This underground mine was first imposed on them by Tahoe Resources and later Pan American Silver, despite broad and vocal opposition.

A 2018 Constitutional Court decision confirmed that Xinka Indigenous rights were violated when the state failed to consult with them  prior to the start of exploration activities. The Court suspended mining  operations while the consultation takes place.

The government’s implementation of the consultation was stalled even before the pandemic hit over irregularities in the process and discrimination that limited Xinka participation. But pandemic restrictions on movement and assembly have people worried those challenges could intensify. Already, representatives from the Xinka Parliament and the Peaceful Resistance of Santa Rosa, Jalapa, and Jutiapa have denounced Pan American Silver’s subsidiary, Minera San Rafael, for entering communities to hand out foodstuffs in violation of the court ordered suspension and the ‘free’ nature of the consultation.

The Xinka’s fight for recognition and right to self-determination has not stopped due to the Covid-19 crisis. Rather, the pandemic presents another threat to community health in the region. But Xinka communities are responding like they know how: through strong community organizing rooted in their culture to ensure no one gets left behind.

A grassroots approach to information sharing

“Our ancestral practices are reflected in how we organize and share information among ourselves. We create a plan to ensure important information is shared directly with each member of the community,” says Luis Fernando Garcia Monroy, who works with the Xinka Parliament and who survived a 2013 shooting carried out by the Escobal mine’s private security. “These ancestral organizing practices are helping prevent the spread of Covid-19 in Xinka territory.”

The Xinka Parliament is the elected representative body of the Xinka People. It is made up of 25 communities who elect delegates to participate in the frequent public assemblies where community issues are addressed. The Parliament holds elections every two years and plays a vital role in keeping Xinka communities informed and organized in the fight to reclaim and exercise their rights as Indigenous people.

Now, due to limitations on in-person assemblies, the plan for information sharing is being carried out through visits respecting physical distance, phone calls, Whatsapp messages, and an extensive presence on social media. This level of organizing is helping the Xinka Parliament ensure everyone has easy access to the best health information that can help protect their communities and stay connected with one another as they deal with heavy restrictions. It also allows the Xinka Parliament to get food and other necessities to those most in need during this crisis.

The Guatemalan government has implemented strict measures, ordering immediate quarantine for anyone showing symptoms or who is suspected of having contracted Covid-19. But for the many Guatemalans who rely on an informal economy to feed their families, coping with these measures has been difficult.

“The response from the Guatemalan government has been for us to stay at home. While that may be a good measure, it doesn’t account for the fact that many Guatemalans live day-to-day, sustaining their families on 25 or 50 quetzales a day ($3 — $7 USD),” says García Monroy. “The communities who sell their fruits and vegetables have been significantly affected and have lost their produce, being prevented from reaching markets due to travel restrictions between regional departments and extended curfews that have been enacted without any prior notice.”

In response, the Xinka Parliament is working to distribute food to families who have presented symptoms of Covid-19 and are in quarantine, while supporting inter-community exchange of food and traditional medicines.

“The threat of Covid-19 is real. But going hungry is difficult as well,” says Emy Gomez, who works as a project coordinator with the Xinka Parliament. “We share what we have. For example, if someone has beans and another person has corn, they’ll swap. We also exchange ancestral medicines. At the moment, with Covid-19, we’re using a lot of lemongrass, ginger and honey. Sharing keeps us united and keeps our health strong in the context of a collapsed health system. We don’t have the luxury of going to the hospital right now, which is why we’re caring for our health. It’s a preventative measure — measures we’ve always known as Xinka People.”

The power of communal lands and food sovereignty

Communal lands play an important role in Xinka culture, with some Xinka communities holding titles that date back to the 1600s. Article 67 of Guatemala’s Constitution also grants special protection to communal lands, recognizing the particularities of Indigenous land stewardship and the importance of traditional governance structures for land management. The Xinka Parliament continues to fight this battle, bringing — and winning — multiple cases before the Constitutional Court to uphold the rights of the Xinka to determine what transpires on their communal lands.

And for Xinka Parliament President Aleisar Morales, that struggle has direct implications for long-term community health and the fight against pandemics like Covid-19.

“As Xinka People, we hold collective title to our lands. We each have a plot of land to work, but we only own what the land produces — not the land itself. We care for our lands and this communal title protects us,” says Morales. “As farmers, we’ve been able to keep working on our own parcels of land, and I think that’s why we haven’t been as affected [by Covid-19].”

During this crisis, the Xinka Parliament is attempting to improve food security and food sovereignty in the region by helping boost production on small family plots. “We are planting our crops for the months to come,” continues Morales. “We don’t know how long this is going to last, but we’re taking advantage of this crisis to become even more self-sufficient.”

The Peaceful Resistance encampment in Casillas

As part of a regional movement to protect land and community health from the threats of the Escobal mine, communities erected two peaceful encampments and have prevented truck traffic from reaching the project for nearly three years. This direct action, alongside the Constitutional Court ruling on the consultation, have effectively suspended operations.

But to prevent the spread of Covid-19, the Peaceful Resistance decided to temporarily dismantle the Casillas encampment in late March, just shy of the three-year anniversary. The encampment in Mataquescuintla remains in place with fewer people at any given time.

“One of the biggest challenges at the moment for the Xinka Parliament is ensuring the Constitutional Court ruling is upheld,” says Luis Fernando García Monroy. “We have seen instances when Pan American Silver has taken advantage of this pandemic to enter communities, which has caused more conflict in this region because the population is so opposed to mining activities.”

Pan American Silver has said they are responding to community needs during Covid-19 by distributing foodstuffs, but at the company’s Annual General Meeting, refused to answer questions about how this action violates the court order.

“We continue to demand that the Constitutional Court ruling be fulfilled and that Indigenous Peoples who have been marginalized for many years be respected,” says García Monroy. “We continue in this struggle and continue to say ‘NO’ to any type of project that directly attacks the physical integrity of our people here in Xinka territory.”

First published on ResistEscobal.com, a site supported by Earthworks, the Institute for Policy Studies, and MiningWatch Canada.

Valerie Croft is a member of the Toronto-based Mining Injustice Solidarity Network.