Institutional bias doesn’t just exist in race relationships. The Forest Service and Forestry Schools have been the handmaiden of the timber industry for so long they do not even recognize their own biases.

A good example is a recent announcement by the Oregon State University Forestry School that:

“A quarter-century-old harvesting restriction intended to last one year has served as an obstacle to returning eastern Oregon national forests to the healthier, more fire-resilient conditions they embodied in the late 1800s.”

These researchers are arguing a restriction on cutting large trees (the 21-inch rule) in eastern Oregon hinders the “restoration” of forests.

The researchers are so immersed in the only good tree is a green tree paradigm that they see any mortality from natural processes as an anathema to “forest health.”  Under their skewed definition of what constitutes a “healthy forest,” they see the only solution is “active forest management,” which is a euphemism for logging. 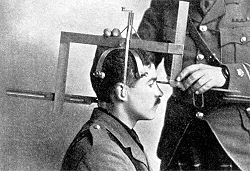 Scientist measuring skull size under the assumption that it indicated overall intelligence.

A failure to examine underlying assumptions often leads to misinterpretation of findings. For instance, more than a century ago, scientists assumed that the skull’s size was an indication of intelligence. Many scientists (nearly all of them men) measured skulls, and what did they discover? Men had bigger skulls, and thus men were more intelligent than women.

Conveniently, the timber industry and Forestry Schools define what constitutes a healthy forest; then, by happy coincidence, this justifies more logging of the forest.

This dichotomy of good and bad is not unlike the same propaganda that dominated Fish and Wildlife agencies who killed the “bad” animals like wolves and bears to preserve the “good” wildlife like elk and deer.

However, this is a quintessential example of a failure to see the forest through the trees. Multiple mortality sources–whether wildfire, bark beetles, diseases like root rot, drought–sustain healthy forest ecosystems.

The effort to eliminate morality from forests demonstrates an ignorance of how forest ecosystems function. 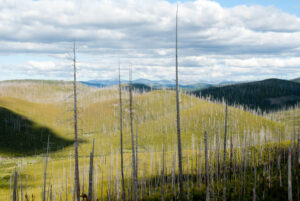 Snags from a forest fire on the Umatilla National Forest in Oregon’s Blue Mountains provide habitat for many wildlife species. Photo George Wuerthner.

One could say that many wildlife species live in mortal fear of green forests. They are reliant on dead trees. For instance, depending on the study, as much as 2/3 of all wildlife species depend on dead trees in some fashion at some time during their life cycles. For example, Richard Hutto, an ecologist in Montana, recently found as many as 15 bird species more abundant in the snag forests that result from high severity burns than any other habitat. 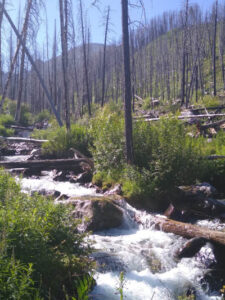 But it is not just birds like woodpeckers. Bluebirds that nest in snag cavities. Spotted owls that forage for small rodents among the snags found high severity fire burns. There are more native bee species found in the aftermath of high severity burns than anyplace else. Marten hunt voles found under dead logs. Bats roost under the flaky bark found on dead trees. And trout grow larger in streams with an abundance of deadwood. Elk find habitat security from hunters and predators among the down wood in snag forests.

The above research also ignores perhaps the most critical aspect of our forests—their role in carbon storage. Large trees store far more carbon than smaller trees. One recent study estimated that 3% of the trees accumulated 42% of the carbon.

Turning a tree into lumber or other wood product results in a significant loss of carbon. 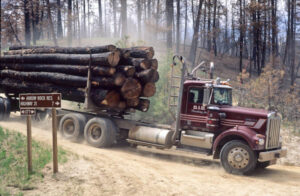 Thinning and logging results in the immediate loss of carbon from the forest ecosystem. Photo George Wuerthner.

Thus, logging immediately releases carbon into the atmosphere, and removal of boles results in an immediate carbon loss to the ecosystem, while a tree killed by beetles or wildfire continues to store the carbon for decades.

Another study found the logging of forests in Oregon emitted 33 million tons of CO2 – almost as much as the world’s dirtiest coal plant. Eliminating chainsaw medicine from our forest ecosystems would contribute to a huge increase in carbon storage.

It’s important to note that even dead trees store significant amounts of carbon for decades to centuries.  While some carbon is lost in a forest fire, the bulk of carbon remains on the site as roots, charcoal, snags, and down wood—all of which store carbon.

A forester with a paint can marking trees for cutting cannot determine which trees may have a genetic resistance to drought or rot quicker, making it easier for birds to carve out cavities.

Finally, another problem with the assumptions guiding such chainsaw medicine is the idea that logging/thinning can prevent large fires or bark beetle outbreaks. The overall conclusion of numerous studies is that timber management is not effective at reducing these climate-driven events.

The problem with forest management is that we have allowed the timber industry to define what constitutes a healthy forest. The industry has made sure that forestry school research promotes this paradigm. We need a new definition of what constitutes a healthy forest ecosystem, but don’t expect it to come from forestry schools or the Forest Service.