Navshya Kuvra had just finished playing his dhumsi (drum) for about 40 protestors dancing at south Mumbai’s Azad Maidan. Just as he sat down to rest, around 11 at night, three man approached him.

“Is it a wedding? What date?” asked Navshya. They conversed, phone numbers were exchanged, and the three moved away. Navshya turned to the group of farmers with him at the January 25 protest at the maidan , and grinned: “I just got a supari [assignment].”

In Kinhawali, his village in Dahanu taluka , Navshya and his wife Bijli grow jowar , rice and tur on around five acres of forest land. When he is not in the field, the 55-year-old farmer is busy performing. He plays the drum at 10-15 weddings a month for a fee, and the organisers cover his travel, food and accommodation costs. “Mostly [I perform in] in Nashik, but even outside. I have gone to Thane and even Gujarat,” said Navshya.

He has been playing the dhumsi for 40 years. “I heard other musicians in my village and I played and learned,” he said.

Sounds of music: tarpa and dhumsi at the Azad Maidan farmers’ protest.

“If there is a wedding, if there is a festival, we do this dance,” he added. “We can dance for days, we don’t get tired.” The cause for celebration this time around was the gathering of around 15,000 protestors from across Maharashtra at a sit-in against the centre’s new farm laws. Organised by the Samyukta Shetkari Kamgar Morcha, the farmers came from 21 districts in a vehicular jatha across roughly 180 kilometres over two days from Nashik, starting from the evening of January 23.

By the end of the day on January 25, Navshya had been performing for two days, He had left his home in Palghar district on January 23, but still wasn’t tired: “I am used to it. I play at weddings through the night too,” he said.

“Everyone [in my community] knows this dance,” said Navshya of the Warli (or Varli) Adivasi community, a Scheduled Tribe. Sitting beside him was Taikakde Thapad, a 53-year-old Warli Adivasi farmer from Dahanutaluka ’s Dhamanagaon village. “The festivals begin around the time of Dussehra. That is when the sowing is also done,” said Thapad. “From Dussehra to Diwali [in November], we celebrate with this dance. That’s how I learnt as well.”

The dancer-protestors at Azad Maidan were from various Adivasi communities in Dahanu and nearby talukas. The laws that they are opposing are The Farmers’ Produce Trade and Commerce (Promotion and Facilitation) Act, 2020 ; The Farmers (Empowerment and Protection) Agreement on Price Assurance and Farm Services Act, 2020 ; and The Essential Commodities (Amendment) Act, 2020 . The three were first passed as ordinances on June 5, 2020, then introduced as farm bills in Parliament on September 14 and hastened into Acts by the present government on the 20th of that month. 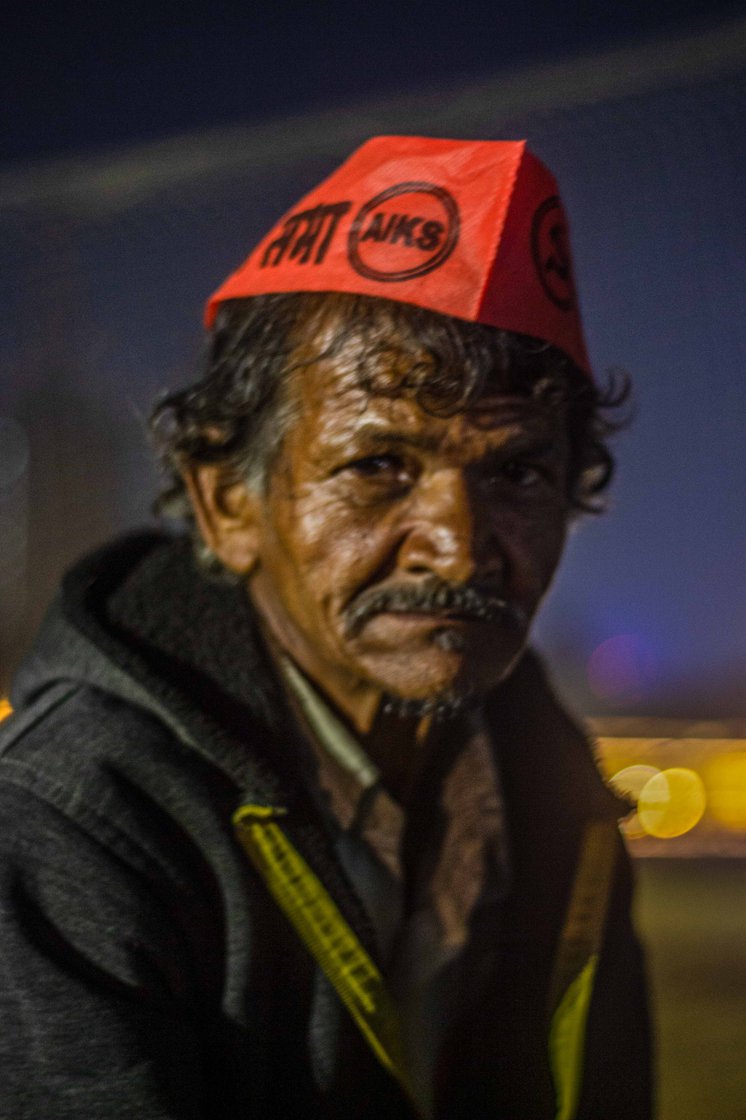 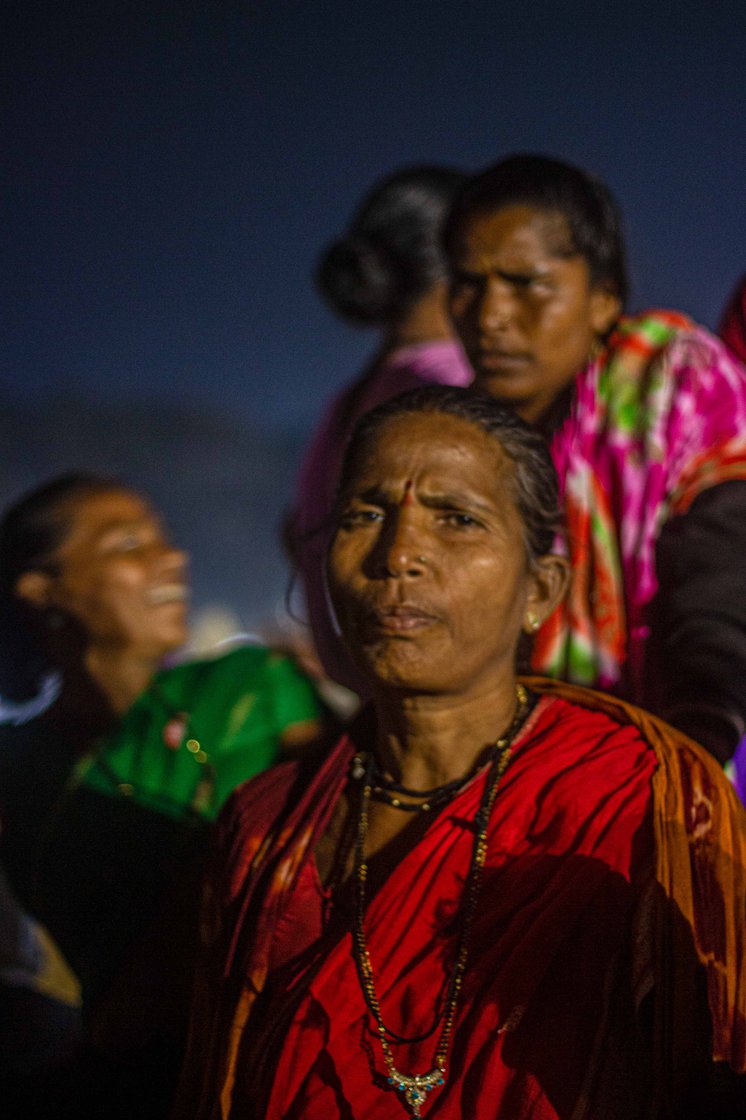 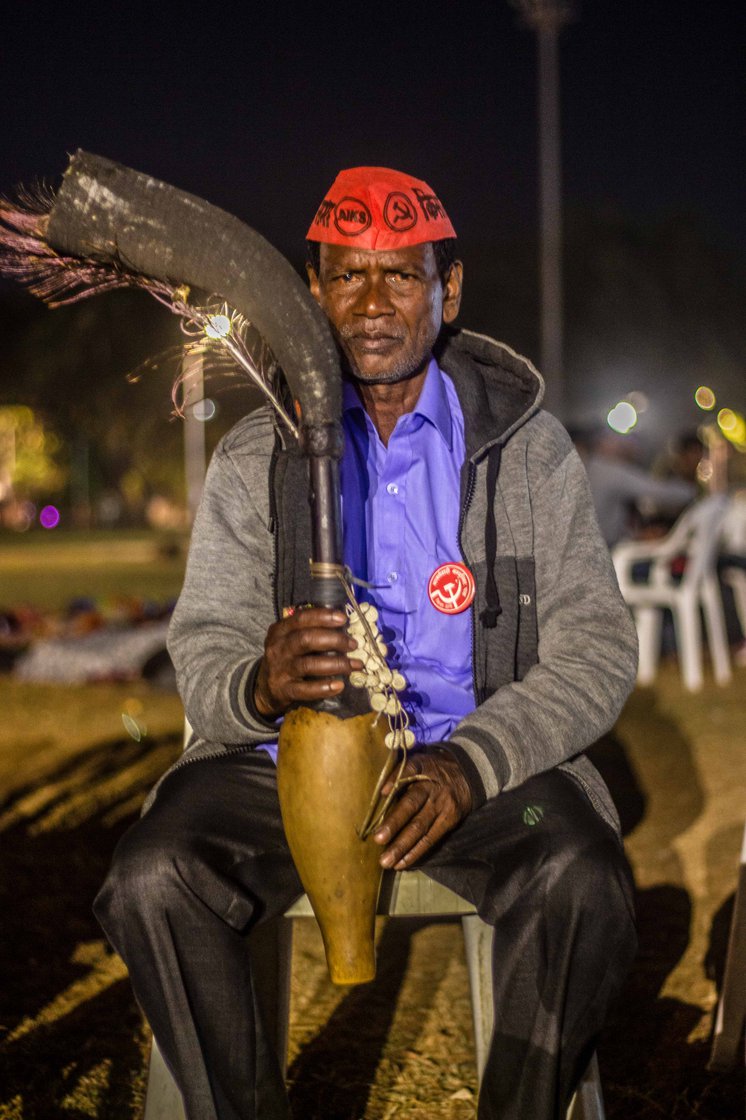 The farmers see these laws as devastating to their livelihoods by expanding the space for large corporates to have even greater power over farmers and farming. They also undermine the main forms of support to the cultivator, including the minimum support price (MSP), the agricultural produce marketing committees (APMC), state procurement and more. The laws have also been criticised as affecting every Indian as theydisable the right to legal recourse of all citizens, undermining Article 32 of the Indian Constitution.

“The government’s three laws are against those that work on farms,” said Narayan Gorkhana, who had been playing the tarpa – a wind instrument with a steady and low sound – intermittently since morning. “That’s why we’re here.” Gorkhana, who belongs to the Koli Malhar community, a Scheduled Tribe, cultivates rice,nachni , jowar and other crops on a little more than an acre of forest land in Palghar’s Osarvira village.

Another tarpa player from Dahanu, 60-year-old Navji Hadal, was also at Azad Maidan. He has been performing for the last 40 years. “I farm on five acres. But I got a land title for only one,” he says, referring to the plot he is entitled to under the Forest Rights Act, 2006 . Their rights under this Act is a recurring demand at protests by Adivais farmers in Maharashtra. “With the three bills, more companies will enter agriculture. And they will decide prices for us. We don’t want that.”

With thanks to Parth M. N. for help with the translation.