“We Could Have Really Used the Compensation:” COVID’s Second Wave in Rural India There isn’t a death certificate or any other way to prove that Shanti Devi died of Covid-19. The circumstances surrounding her death, however, lead to no other conclusion.

In April 2021, Shanti Devi, who was in her mid 40s, fell ill when the second wave of Covid-19 was raging through the country. The symptoms showed up one after another: first a cough and cold and then fever the next day. “Almost everyone in the village was sick at the same time,” says Kalavati Devi, her 65-year-old mother-in-law. “We took her to the jhola chaap doctor first.”

The jhola chaaps , or quacks offering medical services, are found in almost every village in Uttar Pradesh. They are the ‘doctors’ that most people in rural areas have turned to in the pandemic, because they are easily available and the public health infrastructure is poor. “Nobody went to the hospital because we were all scared,” says Kalavati, who lives in Dallipur village in Varanasi district. “We were scared that we would be put in a [quarantine] centre. And the government hospitals were full with patients. There were no beds available. So we could only go to the jhola chaap doctor.”

But these ‘doctors’ are untrained, unqualified, and so incapable of treating seriously ill patients.

Three days after visiting the jhola chaap , Shanti started having breathing problems. This was when Kalavati, Shanti’s husband Munir, and the other family members panicked. They took her to a private hospital about 20 kilometres away from their village in Varanasi’s Pindra block. “But the hospital staff looked at her [condition] and said there was no hope. We came home and started jhaad-phoonk ,” says Kalavati, referring to an age-old, unscientific practice of driving the disease away with a broom.

It was in October 2021 that UP state government announced an ex gratia payment to families of persons who died of Covid-19. The move came nearly four months after the Supreme Court’s directive to provide financial assistance to such families. The state government issued specific guidelines for filing claims for the amount of Rs. 50,000. But Kalavati Devi did not file a claim. She does not plan to.

To claim the money, Shanti’s family needed to furnish a death certificate stating Covid-19 as the cause of her death. The rules stated that the death should have occured within 30 days of testing positive for the disease. The state government later broadenedthe scope of ‘Covid death’ to include patients who were in a hospital for 30 days but died later, after being discharged. And if the death certificate did not mention Covid as the cause, an RT-PCR or rapid antigen test or investigations that proved the infection would be sufficient. But none of this helps Shanti’s family.

Without a death certificate, or a positive test result, or proof of hospital admission, Shanti’s case does not make the cut.

Back in April, her body was cremated at a ghat near the river at Dallipur. “There wasn’t enough wood to burn the body,” says Shanti’s father-in-law, 70-year-old Lullur. “There was a long line of bodies to be burnt. We waited for our turn [to cremate Shanti] and came back.” 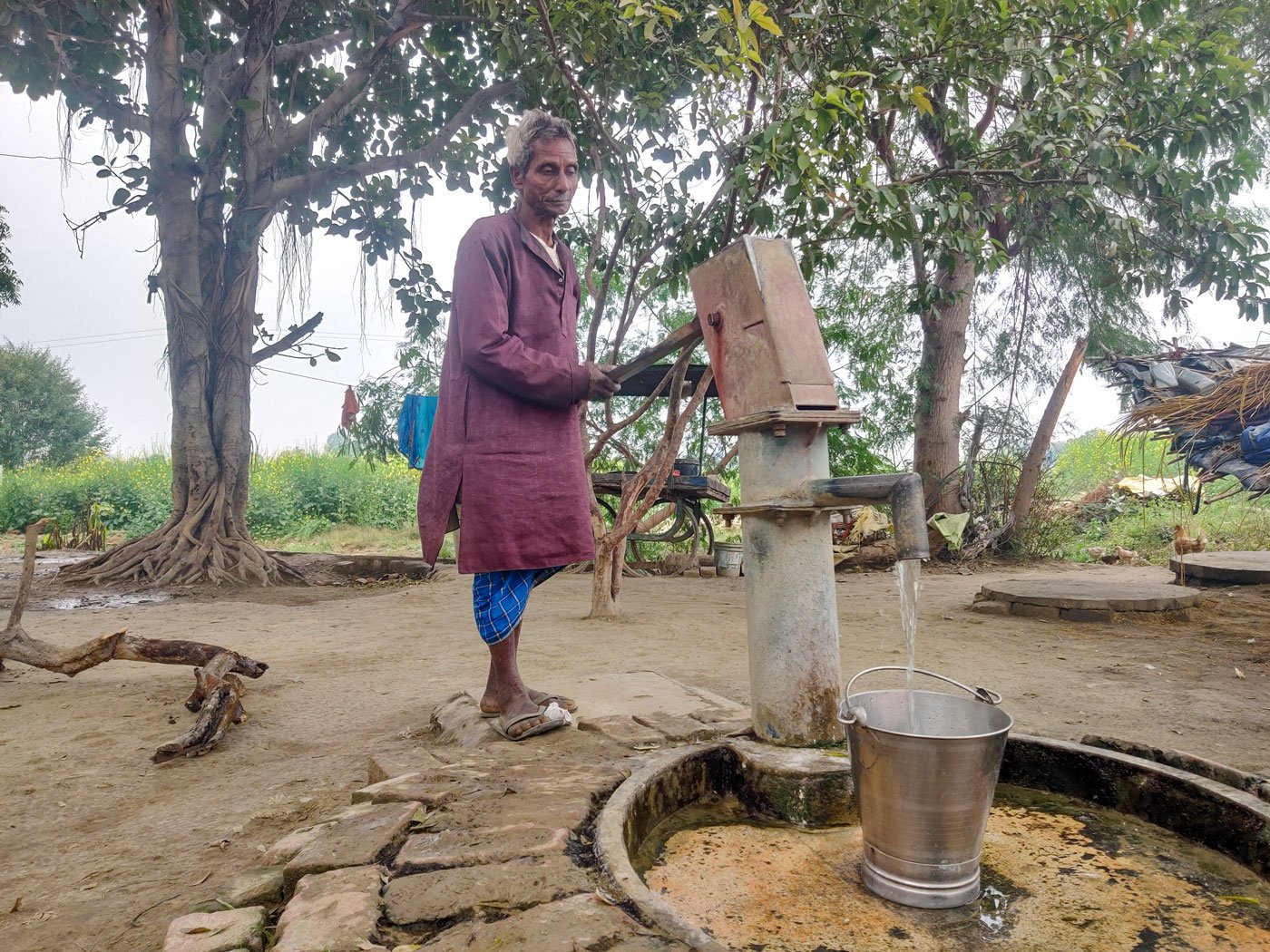 The second wave of Covid-19 (April to July 2021) saw the highest number of deaths from the disease since the start of the pandemic in late March 2020. According to one estimate, out of 3.2 million Covid deaths between June 2020 and July 2021, 2.7 million occurred in April-July 2021. The study , published in Science (January 2022), was conducted by a group of researchers from India, Canada and the US. The analyses showed that by September 2021, India’s cumulative Covid deaths were 6-7 times higher than reported officially.

The researchers also concluded that there was “substantial under-reporting of deaths in India’s official numbers.” The Indian government denies it.

Even as of February 7, 2022, India’s official count of Covid deaths was 504,062 (or 0.5 million). While undercounting has been reported across almost all the states of the country, it has been noticeably significant in UP.

A report in Article-14.com noted that the death count in 24 of UP’s 75 districts was, cumulatively, 43 times more than the official Covid-19 death toll. The report is based on the deaths recorded between July 1, 2020 and March 31, 2021. While not all excess deaths can be attributed to Covid-19, the report contends, “the vast divergence in average general deaths and excess deaths over a part of the pandemic calls into question UP’s official Covid-19 death toll of 4,537 by the end of March 2021.” In May, the images of mass graves and reports of bodies floating in River Ganga pointed at several uncounted deaths.

However, when the state government announced the guidelines for compensation, it claimed that UP’s Covid toll was 22,898. But people like Shanti, whose family needs the compensation the most, had fallen through the cracks.

Navneet Sehgal, additional chief secretary in UP’s department of information, told PARI that no family would be able to avail compensation without the required documents. “Normally also people die,” he said. So the families can’t get compensation “without any idea if it was Covid or not.” He added that testing “was happening in the rural areas as well.”

Except, it wasn’t. Testing delays were reported in UP’s rural hinterland during the second Covid wave. In May 2021, the Allahabad High Court was unhappy at the gradual reduction in testing, and rapped the state government for mishandling the second wave. While a shortage of tests was cited as a reason for testing less, pathology labshinted at receiving orders from the administration to reduce testing.

Even in urban areas, people found it difficult to access testing facilities. On April 15, 2021, Shivpratap Chaube, a 63-year-old resident of Varanasi city, got tested for Covid-19 because he had symptoms. The lab responded 11 days later saying his sample would have to be collected again.

But there was a problem: Shivpratap was dead. He had died on April 19.

When he was ill, Shivpratap was first taken to a public hospital about a kilometre away. “There was no bed available there,” says Shailesh Chaube, his 32-year-old son. “We would have had to wait for nine hours to get one. But we needed an oxygen bed immediately.”

In the end, after making some calls, Shailesh found a bed at a private hospital in Babatpur village (Pindra block), about 24 kilometres from Varanasi. “But he [Shivpratap] passed away there after two days,” says Shailesh.

The hospital’s certificate states Covid-19 as the cause of death on the basis of Shivpratap’s CT scans. This will enable the family to receive the government’s compensation. Shailesh submitted the application in the last week of December 2021. The amount will help him repay the money he borrowed to pay for his father’s treatment. “We had to buy a remdesivir injection in the black market for 25,000 rupees,” says Shailesh, who works as an assistant manager in a bank. “Besides, the tests, hospital bed and medicines cost nearly 70,000 rupees. We come from a lower middle-class family and so 50,000 rupees is a substantial amount.”

For Shanti’s family, which belongs to the Musahar community, the amount is more than substantial. Poor and marginalised, Musahars are a Scheduled Caste in Uttar Pradesh. They own no land, and depend on doing labour work to earn an income.

Shanti’s husband, 50-year-old Munir, is a labourer who earns a daily wage of Rs. 300 working at construction sites. For him to earn Rs. 50,000, he would have to struggle for 166 days (or 23 weeks). Munir has been getting work only once in a week in the pandemic, says his father, Lullur. At this rate, he would need more than three years to earn that amount.

For labourers like Munir, not enough work has been available under the Mahatma Gandhi National Rural Employment Guarantee Act (MGNREGA), which promises 100 days of work in a financial year. As of February 9, about 87.5 lakh households in UP have sought work under the scheme in the current financial year (2021-22). Over 75.4 lakh households have been provided employment so far, but merely 384,153 families – 5 per cent – have completed 100 days of work.

Work is not available regularly or consistently, says Mangla Rajbhar, a 42-year-old activist associated with the Varanasi-based People’s Vigilance Committee on Human Rights. “The work is infrequent and ad hoc, and labourers are compelled to do it in fragments.” Rajbhar adds that there is no planning from the state to provide sustained work under the scheme.

Every morning, Shanti and Munir’s four sons, all in their 20s, go out to find work. But they often return empty-handed, says Kalavati. “Nobody is able to get any work,” she says. Ever since the outbreak of Covid-19, the household has had to go hungry quite a few times. “We have survived on the free ration we got from the government,” says Kalavati. “But it doesn’t last the whole month.”

“It would have cost us 200 or 300 rupees to get Shanti’s death certificate. We would have had to meet several people to explain our situation. And people don’t talk to us properly,” Kalavati says, explaining the hassle involved. “But,” she adds, “we could have really used the compensation.”