At dusk, he walked into the abandoned garden. Sat down on a bench, and placed a big stick and a small phone beside him. The garden was silent for a second time within a year. Children and adults were all once again locked away in their homes.

He had been visiting the garden for a few days. As darkness descended and the streetlights came on, the branches cast shadows on the ground. The trees offered some breeze, the swirling dried leaves on the ground offered a dance of distraction. Still, the darkness within him sank deeper. He sat there for hours, calm but haunted within.

The young man, in his mid-20s perhaps, was a familiar face here – and yet remained unfamiliar to many. His uniform spoke of his work – he was a security guard in a nearby building. His name…who cared? Seven years of guard-work later, he remained anonymous to the zamindars in their apartments.

He had come here from Bundelkhand in Uttar Pradesh. That was where his father – a  local poet and storyteller – was  killed for voicing his views, for expressing himself. His writings and books – his only possessions of value – were burnt in fury. A broken and charred hut remained, as did a broken scarred mother and her ten-year-old son. Fear swept through her: what if they took her boy away? She asked her son to run, run as far as he could.

He wanted to study, inhabit big boots, but found himself cleaning shoes at railways stations in a city he sought solace in – Mumbai. He cleaned gutters, worked at construction sites – and gradually promoted himself to the position of a guard. It was enough to send money to his mother. Soon, she wanted to see him married. 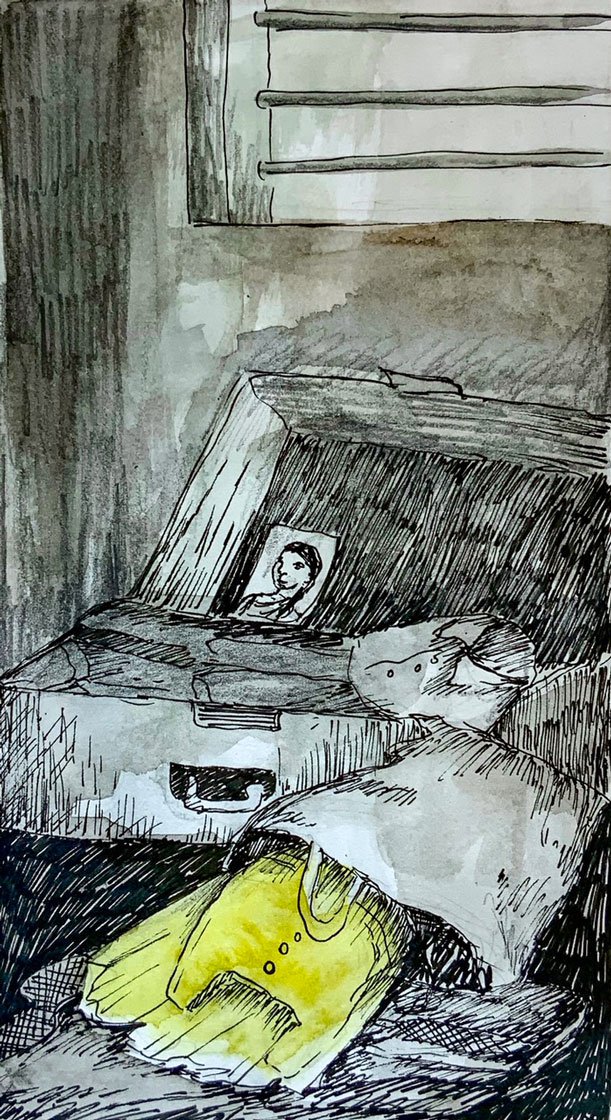 She chose the young woman. He was captivated by her piercing dark eyes. Madhuna Bhangi was 17, and indeed as sweet and pleasant as her name. He brought her to Mumbai. He had until then stayed in a tiny room along with 10 other men in a small chawl in Nalasopara. Now, with Madhuna in town, he rented a friend’s room for a few days. She clung on to him all the time. Intimated by the crowded train journey, the tall buildings, the congested basti . Soon, she said: “I cannot stay here anymore. I can’t feel the breeze of our village here.” The guard had felt the same when he had left his land.

In a while, Madhuna was expecting a baby. She went back to their village. The guard was planning to be with her when the lockdown brought him to a halt. He pleaded for leave but his employers refused. He was told that if he went home, he would not get the job back when he returned. And he might carry the new bimari to his newborn, they explained.

The guard consoled himself with their concern (which was really about not leaving their building unguarded). It was for just a few weeks, he thought. And money was important – he wanted to give his baby all that he had yearned for as a child. Some time ago, he had seen a tiny yellow dress in the bazaar . He wanted to buy it once the shop reopened, also a saree for Madhuna. His restlessness was filled with dreams for his newborn.

Back in the village, Madhuna didn’t have a phone. And anyway the network played hide and seek. She would carry the parchie in which the guard had written his number and take it to the phone booth near the kirana store. Then, with the shop closed, she would borrow a mobile from a neighbour.

She pleaded with her husband to come back home. He remained in Mumbai, unable to move. A few weeks later he got the news: she had delivered their baby girl. They didn’t name her, Madhuna wanted him to see the child first.

As the lights dimmed late at night, the guard got up from the garden bench to begin his night rounds. The flats were all lit up. A few television screens cast light out of the windows. A kid’s laughter rolled out. Pressure cookers howled.

During the lockdown, he had been carrying food delivery orders up to the flats at all times of night and day. He hoped his Madhuna and the little one had enough to eat. He helped carry sick residents to ambulances. He forgot that the bimari might hit him too any day. He saw a colleague who was infected being thrown out of the job. The guard coughed in silence, fearful of losing his job too.

He saw a maid begging to be allowed back to work in the building. Her son was weak with hunger and tuberculosis, and her husband had taken all their savings and left. After a while, the guard saw her begging on the streets along with her little daughter.

He watched the vegetable vendor’s thela being turned upside down by local thugs, the vendor’s life itself turned upside down. The vendor pleaded, howled, cried to be allowed to work – he had nothing for that day’s iftar . His family was waiting for him. The goons said he might get infected while working, and so they were saving him. The vegetables lay splattered like a huge buffet on the street while they rolled away his thela . He picked up the vegetables one by one into his shirt, the tomatoes painting it red. The load soon toppled out.

The residents stared from their windows, recording on their phones, videos were circulated on social media, angry paragraphs addressed to the government.

Some time ago, he had seen a tiny yellow dress in the bazaar . He wanted to buy it once the shop reopened, also a saree for Madhuna

By December, the guard hoped to finally leave for his village, when the other guards began coming back to work. But there were new ones coming in looking for work. He saw their desperation, they looked at him in envy. Knowing that once he left he could lose his job, the guard forced himself to stay a little longer. After all, this was for Madhuna and their baby. He knew she would never complain about the village landlord’s harassment over their debt, or about the ever-smaller portions of food she was managing on.

Then news of another lockdown rolled in. Ambulances kept wailing by, it was worse than the previous year. He saw an old father getting thrown out of the house when he tested positive. He saw young bawling children being taken to hospitals.

He kept working and promised Madhuna he would be home soon. She cried each time, she was scared: “Save yourself. We only need you. Our baby does not even know her father’s presence yet.” Her words pierced him and her voice gave him solace. Those few minutes of phone calls meant the world to both. They spoke little but felt better just listening to each other breathing across the distance.

Then came another call: “No hospital let them in. The beds are full, there is no oxygen. Your wife and child gasped for breath till the very end,” said a panicked villager, rushing around to find an oxygen tank for his own father. The entire village was begging to breathe.

The frail thread that had held the guard together snapped. His malik finally gave himchutti . Now though, who would he go back to? He got back to ‘duty’ carrying food packets. The yellow dress and saree lay carefully wrapped in his small bag.  Madhuna and his unnamed child lay burned or dumped somewhere.