In almost all media reports about the recent fire seasons, one of the chief explanations given for the larger blazes is “fire suppression” and “fuel build-up.”

We hear that 100 years of fire suppression has contributed to the “unnatural” accumulation of fuels and is one of the primary reasons for large fires.

The solution, we are told, is to do more thinning/logging to remove “excess” fuels (or raking if you are former President Trump).

The problem with this generalization is that it does not apply to most wildfires and most plant community types in the West.

For instance, in 2020, when more than 10 million acres burned in California, about half of the acreage (5 million acres) charred was grasslands or chaparral, not forests at all. Thinning would not affect these non-forest acres.

Of the forested acreage that was burned, only 35% of the acres charred were conifers. Why is this important? Because fire suppression, to the degree, that it was successful, almost exclusively applies to conifers.

But wait, there is more nuance here. The conifer forests most influenced by any fire suppression are the lowest driest ponderosa pine and other dry conifer forests. In many locations, the natural fire regime was for frequent blazes every 10-20 years, which presumably kept fuels low enough that fires did not kill mature trees.

It is important to note that not all ponderosa pine forests are influenced by frequent low severity fires.

For instance, the higher elevation ponderosa pine of the Colorado Front Range had longer fire-free intervals and often burned at higher severity once ignited. https://www.jstor.org/stable/2641025?seq=1 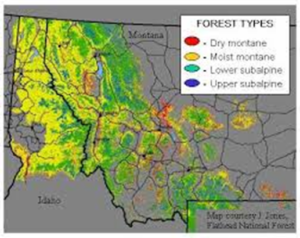 So, characterizing fire suppression as altering the “historical” forest composition of most forest cover is an exaggeration since most forest types are not dry conifers.

Higher elevation conifer forests throughout the West, not just in California, consisting of old-growth Doug fir, fir species, spruce, lodgepole pine, and other species have centuries-long fire rotations. That means even if fire suppression were effective, these conifer forests were likely marginally influenced. In other words, if you have a fire rotation of 200-300 years, fuels naturally accumulate until the right conditions create the possibility for a fire. 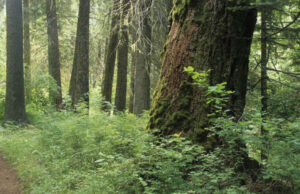 Old-growth Douglas fir forest in the western Cascades of Oregon typically has a fire-free period of 300-600 years. Fire suppression has had no influence on these forest types. Photo George Wuerthner.

In the Rockies, for instance, much of the acreage burned in large fires consists of lodgepole pine, fir, and other higher elevation forests.

The same concept applies to juniper and sagebrush ecosystems. Juniper, for instance, has a fire rotation of 400-600 years. Depending on the sagebrush species, fire rotations may be anywhere from 50 to 400 years or more.

Thus, in all of these ecosystems, fire suppression has not contributed to any unnatural “fuel build-up.”

One of the assumptions promoted by advocates of thinning/logging is that fire suppression and “fuel build-up” have led to higher severity fires. Again, this assumption may be inaccurate. One paper that looked at forests in the Klamath Mountains of California found that areas that presumably missed 4-5 fire rotations did not burn at higher severity.

Another factor is often overlooked or minimized, and that is the influence of climate/weather on fires. All large fires, thus, almost all the acreage charred in any given year, are the result of drought, high temperatures, low humidity, and wind. If you do not have these factors, most ignitions self-extinguish without burning any significant acreage.

If one looks at the 1900s and the acres burned annually, the first part of the century had massive wildfires, including the 1910 Big Burn in western Montana and Idaho that charred 3.5 million acres. However, in the middle of the century between the 1940s-1980s, the acreage burned dropped dramatically. Was this due to “fire suppression”? Logging proponents like to suggest this.

However, this was when the Pacific Decadal Oscillation brought moister and cooler weather to the western United States.  What happens when it is cooler and wetter? You do not get as many ignitions, and the ones you do get don’t spread well. Furthermore, cooler and wetter conditions are favorable for conifer establishment, which would result in “denser” forests.

In typical human hubris, we take credit for suppressing fires, but a good case can be made that Nature was the prime factor contributing to fire suppression.

The influence of fire suppression can be questioned. During the 1900-1930s, millions of acres burned “despite” fire suppression, including as much as 50 million acres in a single season. After the moister and wetter 1940- 1980s, the climate grew increasingly arid and hot due to human climate change. Warmer temperatures and drought favored large burn acreages.

Are we experiencing larger fires today? Yes, we are, but the climate is the driving force in that expansion of fire-charred acreage. I guarantee that if the climate were to suddenly shift to cooler and moister again, we would suddenly find fewer acres burning.

When you hear that fires are larger today, that is accurate, but keep in mind the shifting baseline. If you were to compare the acreage burned today with the 1920s, we aren’t coming close to the acreage that was charred during those drought years.

Clearly, the driving force in wildfires is climate, not fire suppression. 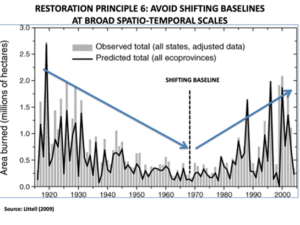