A week ago, eight prominent scientists sent a letter to the Bureau of Land Management (BLM) declaring that the agency’s proposed Tri-State Fuel Break (TSFB) is flawed and will endanger sagebrush ecosystems.

The Final Environmental Impact Statement (“FEIS”) and other project documents are available on the agency’s website.

To quote the scientists: “If implemented as proposed (and as already approved in the Idaho-side Record of Decision), the project will likely degrade the biological diversity and ecosystem services provided by these landscapes.”

The BLM’s proposes creating up to 1,539 miles of fuel breaks (enough to travel halfway across the United States). Fuel breaks by mowing, mowing and seeding, seeding within the fuel treatment zone, and blading, hand cutting, or herbicide application to remove vegetation within the existing roadbed. Besides, the BLM plans to use “targeted grazing” to reduce fuels further. 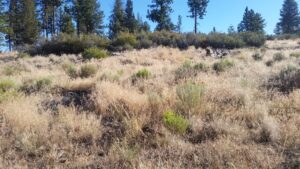 The scientists contend the BLM ‘s proposal will likely fail to contain large fires, and the collateral damage will result in: “(1) fragment large areas of intact sagebrush ecosystems; (2) facilitate the invasion of exotics due to the disturbance created by the breaks; (3) supplant native communities with exotic dominants; and (4) destroy or degrade biological soil crusts and any native species in the sites.”

The scientists’ other problem is the BLM.’s failure to acknowledge that climate/weather is the fundamental force driving large blazes. Under extreme fire conditions of high winds, high temperatures, and low fuel moisture, fuel breaks are ineffective.

The scientists noted that the BLM failed to consider the effect of livestock grazing in the deterioration of the West’s sagebrush ecosystems.

To quote from their letter: “The E.I.S. does not address the ultimate and only controllable cause of the degradation of the biodiversity of the Sagebrush steppe –livestock grazing.” 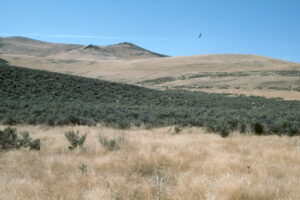 The letter goes on to critique four main points of the BLM’s proposal.

The first is that there is little evidence that fuel breaks can preclude the spread of large fires under extreme fire weather conditions. As Shinneman et al. (2019) acknowledged in their review of fuel breaks, while fuel breaks are likely ineffective for preventing fire spread, they create edge effects and fragment sagebrush habitat. They often serve as a vector for the movement of exotic plants (cheatgrass) and wildlife. 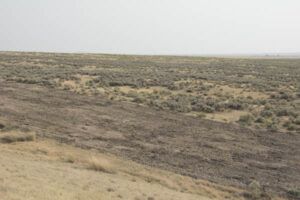 Fuel break on BLM lands in Idaho was created by plowing up native vegetation, creating the perfect site for the establishment of cheatgrass, and fragmentation of the sagebrush ecosystem. Photo George Wuerthner.

One consequential disruption caused by fuel breaks construction is the destruction of biocrusts. Biocrusts cover the soil surface between native bunchgrasses. They not only add nitrogen to the soil, but they also help to inhibit the establishment of cheatgrass and other non-native species.

Ironically one of the justifications for the fuel break treatments and targeted grazing is to save sage grouse habitat. However, Wuerthner (2020) questioned the assumption in a recent column in the Wildlife News.

The scientists noted that “extreme soil trampling and overuse of the native grasses and forbs (occurs) before cattle would begin to graze the less palatable exotic grasses and shrubs. This overuse/overgrazing of the native species would be deleterious to other resource values such as Greater sage-grouse habitat.”

The scientists also note that climate change and the resulting extreme fire weather are primarily responsible for the larger blazes occurring in sagebrush ecosystems. And they chastise the BLM. for its failure to do anything about livestock grazing when GHG emissions from livestock are among the factors contributing to climate warming.

The scientists also disparaged the BLM’s happy talk about proper livestock management. The FEIS repeatedly states that grazing “is managed to meet” land health standards, and improvements are predicated on grazing to be conducted properly. However, the scientists noted that in Southeast Oregon, as an example, over 75% of the allotments currently do not meet standards. 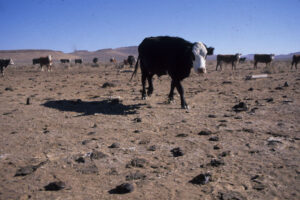 While the BLM recognizes that the spread of cheatgrass is an on-going threat to sagebrush ecosystems, they do nothing to reduce the leading cause of cheatgrass colonization—livestock grazing.

Even more important, the analysis by Williamson et al. shows no support to the contention that livestock grazing, in conjunction with fire, can suppress cheatgrass.

The scientists conclude their letter and analysis by arguing if the BLM is genuinely interested in restoring sagebrush ecosystems, then “passive restoration, achieved by reducing cumulative cattle grazing impacts is the most effective means of achieving these goals.”

Here’s a link to the full letter.

The scientists signing the letter are.