You Don’t Want to Imagine an Ocean Without Coral Reefs, But You Might Have to 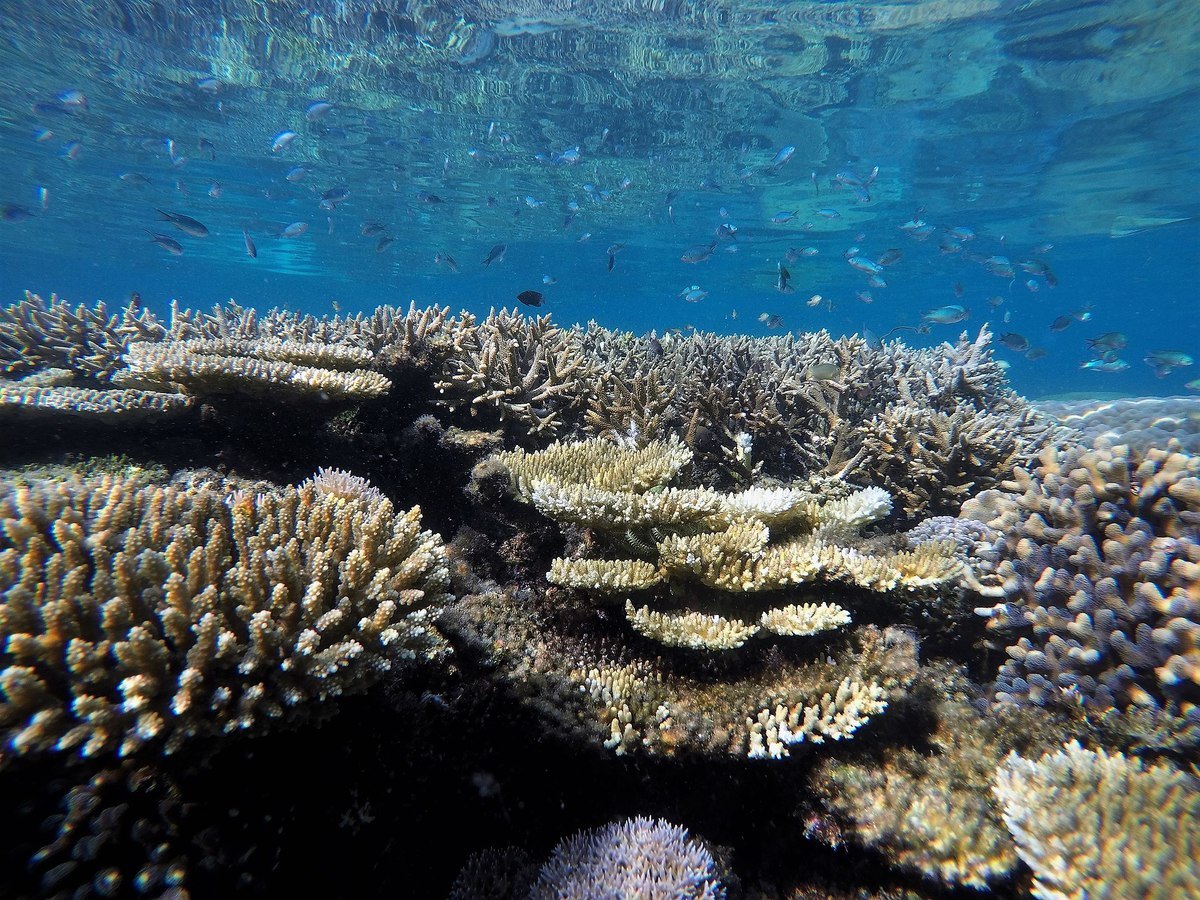 With a recent report titled “Projections of Future Coral Bleaching Conditions,” published by the United Nations Environment Program (UNEP) in November, Leticia Carvalho—head of the Marine and Freshwater Branch of UNEP—said on December 21 that coral reefs are the “canary in the coalmine for climate’s impact on oceans.” The image of the canary in the coal mine is used over and over again to refer to many aspects of the climate catastrophe: reflecting on his studies of glacier decline in Greenland, glaciologist Ian Howat said that “Greenland is going to be the canary in the coal mine,” while an evolutionary biologist in Australia, Dr. Janet Gardner said that “Birds really are the ‘canaries in the coal mine’” because their changes in body weight reflect sensitive assessments of changing weather patterns. Each of these scientists, looking at the specific thing they study—glaciers, bird weight, coral reefs—is right about their particular insight as well as about the fact that what they are seeing is deeply worrying.

What is also concerning is a consensus among these scientists that rising temperatures are creating rapid and negative changes in the ecosystems. The evidence in the report on coral reefs is shocking. “Coral reefs will soon disappear,” said Carvalho, if the current levels of inaction persist. The UNEP report is written by highly qualified scientists who make closely argued points and do not offer loose statements. So, it is pretty chilling to confront—early in the report—the suggestion that corals will be wiped out by the 2040s.

The average temperature in oceans has increased by 0.1 degrees Celsius (32.18 degrees Fahrenheit) in the past century as a result—among other factors—of increased use of fossil fuels. This increase in atmospheric warming, combined with phenomenon such as the 1997-98 and 2010 El Niño, have resulted in catastrophic coral reef degradation. But these earlier episodes do not compare to the impact of the long period of coral reef bleaching from 2014 to 2017; for example, the 1997-98 period saw the death of 16 percent of coral reefs, while the 2014-2017 warming saw 80 percent of the Great Barrier Reef suffer from severe bleaching.

A decade ago, former U.S. Vice President Al Gore wrote the foreword to a report entitled “Reefs at Risk Revisited.” Here, Gore noted that predictably that reefs are the “canary in the coal mine” and their long-term degradation reveals that “our dangerous overreliance on fossil fuels is already changing Earth’s climate.” We will return to Gore’s use of “our” soon. But for now, it is important to point out that the problem for the reefs is not only fossil fuel use, but it is also the other aspects of capitalism, such as the disposal of plastic goods into the oceans.

Scientists call the coral reefs the “rainforests of the sea,” because coral reefs—like rainforests—are highly diverse ecosystems; their destruction would lead to the extinction of a large number of species (as has already been documented in 2019 in a report by the Intergovernmental Science-Policy Platform on Biodiversity and Ecosystem Services).

The current UNEP report suggests that there are only two possible scenarios for the planet: a “worst-case scenario’ and a “middle-of-the-road” scenario. There is no good scenario. The damage that has already been inflicted on the reefs and the possibility that sea temperature will decrease is so minimal that there is every reason to expect that severe bleaching could lead to coral reefs disappearing by 2045.

If fossil fuel use is not decreased and global warming continues, then “every one of the world’s reefs will bleach by the end of the century, with annual severe bleaching (ASB) occurring on average by 2034.” This new date is nine years ahead of schedule from what the UNEP projected in 2017 (one reason for the lower date is that the measurements have improved over this period).

If countries exceed their current pledges to reduce carbon emissions by 50 percent, then ASB will not take place before 2045. Either way, this is just a matter of an eleven-year gap.

One convenient explanation is that shifts in the climate have to do with “human activity” or “humanity.” There is even a name used to describe this period of history—the Anthropocene, a proposed name for a new geological epoch.

Carvalho of UNEP recently said, “Humanity must act with evidence-based urgency, ambition, and innovation to change the trajectory for this ecosystem.” Blaming “humanity” in general is far too vague. It fails to accurately point the finger where it must be pointed.

Firstly, the term Anthropocene obscures the fact that it is the massive productive powers of capitalism that generated carbon emissions based on the use of fossil fuels. It is not some vague term such as Anthropocene that explains the explosion of carbon emissions, but it is the social formation called capitalism that is central to global warming.

Secondly, since capitalism developed in an uneven way, with certain countries (the North) benefitting by use of force—what is called imperialism—these countries disproportionately benefited from the productive powers of capitalism. They have historically spewed the most carbon into the atmosphere and continue to do so on a per capita basis. Any policy that does not acknowledge the 1992 Rio formula of “common but differentiated responsibilities” will fail to see that while countries in Europe and North America benefitted and continue to benefit from fossil fuels, other places did not and do not benefit and, are yet, the most likely to be adversely impacted by rising temperatures.

Thirdly, the most important impediments to change have not been “humanity” but the corporate power and the United States government that not only diluted the 2015 Paris Agreement but then refused to be bound by the tepid agreements. It is telling that countries such as Jamaica and Mongolia updated their climate plans to the United Nations before the end of 2020—as mandated by the Paris Agreement—although these countries produce a tiny fraction of global carbon emissions. The funds that were committed to developing countries for their participation in the process have virtually dried up while external debt has ballooned. This shows a lack of basic seriousness from the “international community.”

The reefs will die. That seems certain. The UNEP report will not circulate. That seems equally certain. The Marshall Islands and Rwanda will file their updates. That has already happened. Meanwhile, the United States and its allies will sit on the sidelines, expanding fracking with a “who cares” attitude.