Still from “At Eternity’s Gate.”

Last week, after watching a press screening of Julian Schnabel’s biopic of Vincent Van Gogh titled “At Eternity’s Gate”, I was so struck by its divergence from the memories I had of Vincent Minnelli’s 1956 identically themed “Lust for Life” that it struck me as worth writing about the two in tandem. While I have grave reservations about Schnabel’s politics and aesthetics, I can recommend his film that is playing in theaters everywhere that are marketed to middle-brow tastes, the kind of audience that listens to NPR and votes Democratic. These are the sorts of screeners I get from publicists throughout November to coincide with NYFCO’s awards meeting in early December, the “good”, Oscar-worthy films that Harvey Weinstein used to produce until he got exposed as a serial rapist.

Willem Dafoe is superb as Vincent Van Gogh in “At Eternity’s Gate” even though at 63 he can hardly evoke the almost post-adolescent angst of the artist who died at the age of 37. Like Willem Dafoe, Kirk Douglas not only bears a striking resemblance to Van Gogh in “Lust for Life” but was only 3 years older than the artist at the time of his death. Since “Lust for Life”, as the title implies, emphasizes turbulence, Douglas was just the sort of actor who could bring that vision of Van Gogh to life. In Minnelli’s adaptation of the Irving Stone novel, Van Gogh’s life was a succession of crises that finally became too much to bear.

Stone’s work faced the same obstacles as Van Gogh’s paintings that never sold in his lifetime. It was rejected by 17 publishers until its debut in 1934. Stone was not particularly known for his politics but did take the trouble to write a novel in 1947 based on the marriage of Eugene V. Debs and his wife Kate who had no use for socialism. The title was “Adversary in the House”, an allusion to her.

However, there must have been just enough politics in “Lust for Life” for screenwriter Norman Corwin to feature in his script. The first fifteen minutes or so of the film depicts Van Gogh as a lay priest in a coal-mining village in the region of Borinage who immerses himself into the daily life of super-exploited workers. As a hobby, he makes drawings of the miners and their families as a kind of homage to the people in need of what Marx called an opiate.

In a letter to his brother Theo in April 1879, Van Gogh demonstrates his interest in the suffering of Borinage’s mining families even though it prioritizes making art rather than overcoming poverty through political action. After all, he was a devout Christian and likely could not see past the fatalism that was at the heart of this religion. He writes:

It’s a sombre place, and at first sight everything around it has something dismal and deathly about it. The workers there are usually people, emaciated and pale owing to fever, who look exhausted and haggard, weather-beaten and prematurely old, the women generally sallow and withered. All around the mine are poor miners’ dwellings with a couple of dead trees, completely black from the smoke, and thorn-hedges, dung-heaps and rubbish dumps, mountains of unusable coal &c. Maris would make a beautiful painting of it.

Later I’ll try and make a sketch of it to give you an idea of it.

As the son of a minister, Van Gogh saw his calling as a saver of souls rather than an artist. When he is visited by two members of the evangelist sect he belonged to, they are appalled by the rags he is dressed in and the straw mat he slept on. When asked by the dignified and well-tailored visitors what happened to his bed, he answers that he gave it to a miner who needed it more than him.

A work from this period titled “Miners’ Wives Carrying Sacks of Coal” will give you an idea of his inspiration at the time: 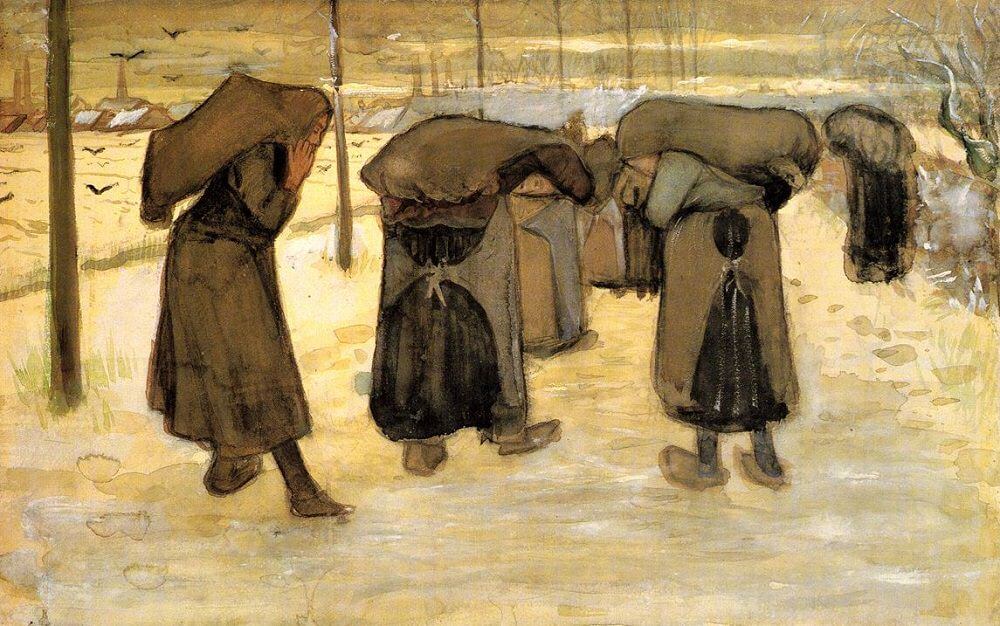 Norman Corwin, a somewhat obscure figure today, was alongside Orson Welles one of the major figures of the Golden Age of Radio. Among his works was a 1942 collaboration with Edward R. Murrow titled An American in England that focused on ordinary people and how the war affected them. Corwin left radio 10 years later out of disgust with McCarthyism. Although he was smeared as a CP’er, he insisted that he was never a party member.

Vincent Minnelli, who was married to Judy Garland and rumored to be gay, embodied an aesthetic that was widespread in the 1940s and early 50s but, unlike film noir, never had a name attached to it (as far as I know). Perhaps the closest to him as a filmmaker was Douglas Sirk whose films shared the same plush look and obsessive love relationships, often with homoerotic overtones. Minnelli was considered a “pure stylist” who in Andrew Sarris’s eyes believed more in beauty than in art. Despite being considered a typical Hollywood director, he was highly valued in Cahiers du Cinéma.

This early period in Van Gogh’s development was apparently of no interest to Schnabel. Since his film is only 10 minutes shorter than Minnelli’s, clearly the omission of Borinage was an editorial one.

Unlike the melodramatically tumultuous “Lust for Life”, “At Eternity’s Gate” is much calmer and even meditative. Structured as a series of debates between Van Gogh and important figures in his life over the role of the artist and whether his particular style of painting was of merit, Dafoe’s voice remains soft and calm almost as if he were a participant in a panel discussion at an academic conference. Ironically, this succeeds on its own terms just as Kirk Douglas’s portrait of the artist at the end of his tether works. Perhaps, this is because these are just two aspects of the artist’s personality that would be difficult to convey simultaneously.

Schnabel’s Van Gogh is the prototype of the artist ahead of his time. Considered crude and unschooled by his contemporaries, his ability to convey the transcendence of the natural world was clearly what Schnabel wanted to communicate. At one point, he is being lectured by his friend Paul Gauguin about how he piles paint strokes on top of each other to such an extent that it almost seems his real goal is to be a sculptor. This was, of course, analogous to the style Schnabel made his own. He made a splash in the art world for his “plate paintings” in which the canvas includes not only dinner plates but antlers, velvet and ceramics. Such is the state of contemporary art that these “novelties” are embraced rather than rejected as was the case in Van Gogh’s time.

Perhaps the most striking contrast between the two films is the treatment of the stormy relationship between Van Gogh and Gauguin. Played by Oscar Isaac, Schnabel’s Gauguin—like Van Gogh—never raises his voice. Mostly, he speaks down to him as if he were the chairman of an art department dissertation committee giving advice to a PhD student. Van Gogh stands his ground, making points about the immanence of god in a landscape that would have been lost on a libertine like Gauguin.

Anthony Quinn’s Paul Gauguin was not that much different from the characters he played in a host of films, a swaggering, aggressive and hostile personality that was just as capable of intimidating his female assistant in “La Strada” it was of reducing Van Gogh to tears. No matter how cruel he was to the psychologically fragile artist, Van Gogh’s neediness paid a dividend. Hours before Van Gogh cuts off an ear as an offering to Gauguin, he asks him why he continues to be his housemate if he hates him so much. Gauguin replies that it is only his brother’s allowance maintaining both artists that keeps him there.

Both films are utterly gorgeous, using the same technique to pay homage to the artwork. You see a scene just as it existed in real life, like a wheat field or a man shooting pool, and then you see the art work that this inspired.

Finally, in terms of the films’ aesthetics, Schnabel uses a score by Tatiana Lisovskaya that employs a chamber ensemble which lends an intimacy in sync with the film’s understated quality. Minnelli used Miklos Rozsa, whose lush orchestration is also perfectly matched to the goals the director had in mind.

To summarize, both films are very much worth seeing. “At Eternity’s Gate” is currently playing at six different theaters in New York and in major cities everywhere while “Lust for Life” is available on Youtube for free or at a minimal cost on all VOD platforms for those who prefer to use smart TV’s.

After concluding that Van Gogh’s life among the coal miners might have indicated a possible link to the broader movement against capitalism in the 19thcentury, I Googled “Van Gogh” and “capitalism” and was pleased to see that there was a chapter on him in my friend Tony McKenna’s “Art, Literature and Culture from a Marxist Perspective” that I reviewed in 2016.

Although Van Gogh’s time with the miners reflected his religious impulses rather than a desire to help them organize a resistance to their conditions, there was an element that was present there that remained with him throughout his life. Van Gogh hated bourgeois values whether it was manifested by the well-dressed Protestant ministers who castigated him for sleeping on a straw mat or the tastes of the wealthy seeking innocuous and pretty salon type paintings that did not challenge their sense of complacency. It was his hatred of middle-class values in art that drew him to Gauguin who shared such views and that also convinced him of the need for an artists commune in Arles. McKenna comments on that ambition:

In 1888 Vincent moved south to Arles, where he was inspired by the quality and consistency of the natural light. The most famous in the series of sunflower paintings comes from this period. Van Gogh paints  big, empty, blue skies; golden, rolling fields; and trees whose leaves turn upwards in flits of copper flame. Again, nothing here is particularly realistic, and yet these pictures seem to capture the essence of a heat-soaked Mediterranean summer. And again, they clearly convey the mood of the artist which seems primed, almost buoyant. The lightness of his mood is more than a result of the luminescence of the location. It is also a product of the fact that Van Gogh now cherishes the hope of creating an artistic commune. The notion of an artistic commune is important because it grows out of Van Gogh’s experiences of labour as fractured and distorted by class relations and oppression. In the art gallery, he experienced the indignity of art subserviated to the commodity cycle, and he was expelled from the priesthood because his sympathies lay so unequivocally with the oppressed. Van Gogh had experienced the pre-existing social structures and organisations of the working world as relentlessly alienating objectivities. The desire to create a commune is, as well, indicative of the need to transcend a capitalist imperative, to create an enclave in society whereby people might mutually support one another, bound only by their shared loved of art. Such a free association would no longer be subject to the prerogatives of capital. The notion of the commune was the genuine but naive attempt by the artist to grapple with the fundamental political problem of our age. And it was to be Vincent’s final utopia.

For those who would like to read Tony McKenna’s chapter on Van Gogh, contact me at lnp3@panix.com.