Why is NATO So Irrational Today?

We are witnessing a remarkable increase in tension between the US/NATO and Russia these years – and it can not only be explained by whatever we choose to think happened in Ukraine and Crimea. We find a totally new effort on both sides to use social and other media to tell how dangerous “they” are to “us”. There is a clear tendency to “fearology” – to instill fear in the citizens on both sides about the capabilities and intentions of the other side.

We find deeply concerned articles about the possibility of war between the two parties – a quarter of a century after the Berlin Wall tumbled.

Why is the new tension rising in Europe between US/NATO and Russia so manifestly dangerous and – with the exception of the Cuban Missile Crisis worse than during the First Cold War?

On a series of indicators, the political Western world – US/NATO/EU and Christian (Orthodox, Protestant, Catholic with sects) – is becoming weak relative to other players in the global society.

The West has engaged in a series of wars that turned into very costly fiascos – from what followed from Sykes-Picot which turned 100 in May 2016 over Vietnam to the destruction of Afghanistan, Iraq, Libya and Syria.

The West is still the largest economic bloc and the 28 NATO members cover about 70% of the world’s mind-boggling US $ 1700 billion military expenditures. Africa as a continent, BRICS countries – China in particular – are making progress, also in fields where the West has failed; for instance, China has lifted 400 million Chinese out of poverty in a couple of decades. The wealthy West has done nothing of the sort over centuries but produced a grotesquely, perversely unequal income distribution.

Take a look at the graphs linked to this summary page from SIPRI. They will tell you how world military expenditures in constant prices have risen since 1996 even though the Warsaw Pact had been dissolved. In 2015, the US alone stands for 36% of the world’s military expenditures, China for 13% and Russia for4%.

President Obama stated recently that the US military is stronger than the next 8 – here is what he said in his State of the Union Address on January 12th, 2016:

“I told you earlier all the talk of America’s economic decline is political hot air. Well, so is all the rhetoric you hear about our enemies getting stronger and America getting weaker,” Obama said in his last annual State of the Union address Jan. 12, 2016. “Let me tell you something: The United States of America is the most powerful nation on Earth. Period. Period. It’s not even close. It’s not even close. We spend more on our military than the next eight nations combined.”

In spite of these fact that prove the overwhelming and increasing superiority of today’s NATO, we see a constantly increasing propaganda coming out of NATO circles to the effect that NATO is getting weaker and that Russia a formidable, unreliable power just waiting for the next opportunity to invade some country in the West.

Let’s take a look back in time.

What did the ’military balance’ – or what some called the correlations of forces – look like in the 1960s and 1970s between the then Warsaw Pact – the WTO, Warsaw Treaty Organisation – and NATO? This is important in and of itself because there is a whole school of thought that maintains that military balance is a major tool to prevent war and create stability.

Here is what I have calculated on the basis of SIPRI’s data sheet: 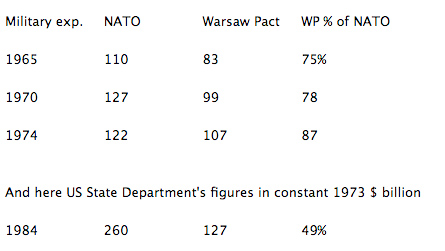 (And here some sources to the discussion of the relative inferiority of the Soviets at the time).

The graphs tell you that the Warsaw Pact military expenditures were as big as 75 – 87% of NATOs during the old Cold War.

In other words while considerably smaller (and with a much lower level of technical sophistication but more emphasis on quantity) the Warsaw Pact was indeed a potentialthreat in terms of capability at the time.

Whether it was a real threat would depend not only on capabilities but on another factor: intentions.

As far as I know, no first-strike, out-of-the-blue plan for an all-out attack on Western Europe by the Soviet/WTO has been found when the archives were opened after the Cold War. Both sides had plans for how to withstand and roll back an attack from the opponent. Both parties used simulations and held exercises with that in mind. If there had been a solid evidence that either party had a concrete plan – with intention and capabilities to back them up – for un-provoked invasion and occupation, the other sides would have made it top news to the world.

Be that as it may, the indisputable truth is that today the West is in a much better situation than in the old Cold War era.

From non-aligned Yugoslavia has joined Slovenia (2004) and Croatia (2009). That is, 12 new members over 10 years, all of some security importance to the Soviet Union at the time. It all means that what Russia has a legitimate reason to see as a potential enemy – namely NATO – has moved very much closer to its border.

And what are the Russian military expenditures as percentage of NATO’s today? Less than one-tenth of what they were during the old Cold War!

According to SIPRI’s latest statistics, Russia’s military expenditures are 8% of NATO’s and 11% of those of the U.S. Look above – down from 75-80% of NATO during the First Cold War to 8% of NATO today!

Now, are military expenditures a good measurement of military strength?

It’s true that national military budgets are not always completely comparable; all countries do not include the same expenditures, some categories are included under various other budgets and it is no easy task to compare across exchange rates and time. Likewise the national purchasing power per currency unit is often not comparable.

But then – simply comparing numbers of weapons or soldiers is much less meaningful and much less ‘objective’. Quantity is one thing, quality quite another.

If you look for only one single indicator applicable across the board, military expenditures in constant prices (Milex) is it.

It is true that you can spend your money in different ways and some people, as we all know, are able to get a lot out of little while others just squander money thoughtlessly.

However someone with only 8 dollars shall be smart beyond the imagination to achieve much more for his money than the one who has 100. In addition, one can ask: How many times stronger must you be to have a fair chance to win a war you start against an opponent?

There is of course the theory advanced by Andrew Mack in World Politics in 1975 – “Why Big Nations Lose Small Wars: The Politics of Asymmetric Conflict” – in World Politics. And there is a fine discussion here by Ivan Arreguín-Toft. Of course, there are other factors than armies and weapons – such as resolve, cohesion, topography, moral strength, economic strength, sustainability and whether you fight for your motherland or far away from it to gain some resources.

And some would maintain – and correctly so in many historical cases – that nonviolence is stronger, among other things because it is legitimate, considered courageous and draws sympathy from third parties (also because it can’t be used for aggression).

On most if not all these indicators, Russia would be a loser if it tried to invade, occupy and control the whole or parts of Eastern Europe. And it could certainly not count on the sympathy from important international players anywhere if it did. Indeed, only a suicidal or mentally ill leader in Moscow would – for years ahead – start a war against NATO.

So, to put it in a different way: Could anyone please find us a NATO general who’d rather serve in the Russian military with the wages, technology, the budgets and working conditions he would have there if he switched from Bruxelles to Moscow. Name and phone number, please!

One must indeed wonder why the West that has much less to fear militarily than ever since 1945 either pretends to be so fearful or acts with such out-of-proportion irrationality and alarmism.