We know that’s what CNN told people, but that is far from clear from the data. The lowest-paid workers have, on average, been seeing pay increases that exceed inflation. Here’s the picture for production and non-supervisory workers in the hotel and restaurant industry. 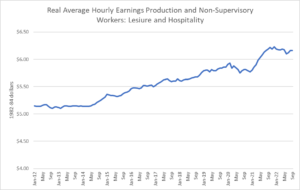 The graph shows the average hourly wage adjusted for inflation. As can be seen, real wages for these workers, who are among the lowest paid in the economy, is just over 3.0 percent higher than it was before the pandemic. This doesn’t mean that these workers have it great, they are still very low-paid, but it would make less sense to say that they are living “paycheck to paycheck” today than it would have in 2019, when most reporting on the economy was positive. There is a similar story in most other low-paying sectors.

It’s true that workers higher up on the wage ladder have not done quite as well. The average real hourly wage for production and non-supervisory workers for the private sector as a whole is just even with where it was at the start of the pandemic. That’s not great, we would like to see wages rise through time, but it is hardly a disaster.

After all, there have been many periods where wages have not kept pace with inflation. For example, real wages fell 3.9 percent from 1980 to 1989, the period often called “the Reagan boom.”

It’s also worth noting that many workers higher up on the pay ladder likely benefited from the opportunity to refinance their homes before mortgage rates rose. Roughly 20 million homeowners did. If a person with a $200,000 mortgage was able to refinance their home, with a 1.0 percentage point drop in interest rates, they would be saving $2,000 a year. This should go far towards keeping them from having to live paycheck to paycheck.

In short, while many people undoubtedly are being squeezed by inflation, it is not clear why there would be more people living paycheck to paycheck today than before the pandemic, when most news outlets were touting the strong economy. The data just don’t fit the story CNN wants its audience to believe.