How Russian Scientists Tracked the Toll of Soviet Whaling Ships of the Sovetskaya Ukraina factory fleet tying up at the port of Odessa during the 1959–1960 whaling season. Photo: RIA Novosti archive, image #171693 / Vsevolod Tarasevich / CC-BY-SA 3.0.

Every year, an estimated 13 million people go whale-watching around the world, marveling at the sight of the largest animals ever to inhabit Earth. It’s a dramatic reversal from a century ago, when few people ever saw a living whale. The creatures are still recovering from massive industrial-scale hunting that nearly wiped out several species in the 20th century.

The history of whaling shows how humans have wreaked careless havoc on the ocean, but also how they can change course. In my new book, “Red Leviathan: The Secret History of Soviet Whaling,” I describe how the Soviet Union was central both to this deadly industry and to scientific research that helps us understand whales’ recovery.

From wood to steel and bad to worse

At the start of the 20th century, it seemed whales might gain a reprieve after years of hunting. The era of whaling from sail boats, depicted in such memorable detail by Herman Melville in “Moby-Dick,” had nearly wiped out slow, fat species like right and bowhead whales, and also wreaked substantial harm to sperm whales.

In the 1800s, U.S. whalers sailed without restraint or hindrance into every corner of the world’s oceans, including waters around Russia’s Siberian empire. There, tsarist officials watched in helpless rage as Americans slaughtered whales upon which many of the region’s Indigenous peoples relied.

In the 1870s, petroleum began to replace whale oil as a fuel. With few catchable whales remaining, the industry appeared to be near its end. But whalers found new markets. Through hydrogenation – a chemical process that can be used to turn liquid oils into solid or semi-solid fats – manufacturers were able to transform smelly whale products into odorless margarine for human consumption.

Around the same time, Norwegians invented the explosive harpoon, which killed whales more efficiently than hand-thrown versions, and the stern slipway, which allowed whale carcasses to be processed on board ships. Along with diesel engines and steel hulls, these technologies enabled whalers to target previously untouched species in once-inaccesible locations, such as the Antarctic.

Late to the party, late to leave

As mechanized whaling gained force in the 1920s and ‘30s, Norwegian, British and Japanese whalers cut through populations of blue, fin and humpback whales on a scale that is hard to believe today. In what scientists once thought was the peak catch year, 1937, over 63,000 large whales were killed and processed.

World War II briefly suspended this slaughter, which many governments were starting to realize threatened the survival of some whale species. In 1946, whalers, statesmen and scientists created the International Whaling Commission in hopes of heading off a return to disastrous prewar levels of whaling.

That same year, the USSR joined the IWC and took control over a former Nazi whaleship, which it renamed the Slava, or Glory. No one suspected the central role the country would play in the most disastrous two decades of whales’ long history on Earth.

The madness of modern whaling

Despite the IWC’s best intentions, postwar catches rose quickly. By the mid-1950s, even longtime whalers had to admit that big whales were becoming too scarce for their industries to be profitable. All nations except Japan began to ponder the end of whaling.

It thus came as a shock when the Soviet Union announced in 1956 that it planned to build seven new “floating factories” – gigantic industrial processing ships, accompanied by fleets of smaller “catcher” boats that would scour the oceans for whales.

Soviet whale scientists were as stunned as observers elsewhere. These biologists and oceanographers had been watching the decline from ships and from their labs in the Fisheries Ministry and Academy of Sciences since the 1930s.

Instead of supporting the fleet expansion, they argued forcefully that whales stood on the brink of extinction, and whaling should decrease radically, not expand. This was how the Soviet planned economy was meant to work: Science, not profit, would help guide economic decisions, letting planners know how much could be extracted from the natural world and when to stop.

But Soviet officials were determined to finally catch whales on a large scale, as Western nations had done for so long. The Fisheries Ministry ignored its scientists’ recommendations and built five of the seven planned floating factories over the next decade.

By the 1960s, the Soviet Union was the world’s largest whaling nation. Whalers such as the legendary captain Aleksei Solyanikwere celebrated as superstars, comparable to astronauts like Yuri Gagarin.

But the scientists had been right: Many whales species were nearly gone. To produce large catches, Solyanik and other captains decided to ignore international quotas and secretly targeted the most endangered whale species, including blue, humpback and fin whales in the Antarctic and the North Pacific.

In 1961, for example, Soviet fleets killed 9,619 rare humpbacks south of New Zealand, while reporting only 302 to the IWC. This was only a portion of their global catch, which the Soviet Union continued to underreport for years. Driven by Moscow’s demands for ever-increasing production, whalers worked at reckless speed, wasting much of the fat and meat taken from the dead whales. It is doubtful the industry was ever profitable.

Thanks to Soviet scientists who preserved some records of these illegal kills and to subsequent work by other scholars, it now appears likely that the Soviet Union killed around 550,000 whales after World War II while reporting only 360,000. We now know that global whale harvesting peaked in 1964, not 1937, with a total of 91,783 whales killed – about 40% by Soviet whalers.

In this 1976 news video, Greenpeace activists confront a Soviet whaling ship on the high seas. NOTE: Contains footage that some viewers may find disturbing.

By the 1970s, populations of large whales had dwindled to insignificance. Many observers were sure extinction was inevitable. But momentum for whale conservation was growing.

The U.S. listed blue, fin, sei, sperm and humpback whales under the law that preceded the Endangered Species Act in 1970, then continued to protect them under that law, enacted in 1973. Whales also received protection in U.S. waters under the 1972 Marine Mammal Protection Act.

Thanks to pressure from environmentalists and its own citizens, the Soviet Union ended its whaling industry in 1987. The country accepted a global moratorium on commercial whaling, which remains in force today with only three holdouts: Norway, Iceland and Japan. 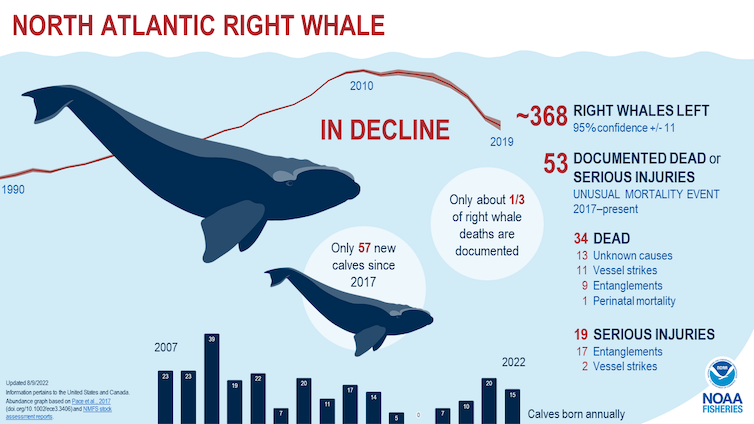 North Atlantic right whales are critically endangered, with a population estimated at less than 368 animals. NOAA

In one of the greatest conservation successes, Eastern Pacific gray whales are today estimated to have returned to pre-exploitation abundance, and may actually be reaching the limits of what their primary foraging grounds in the Bering Sea can support. And in 2018 and 2019, German scientists and researchers from the BBC observed and filmed fin whales feeding around the Antarctic peninsula in vast pods that recalled the way the ocean must have looked before the 20th century.

Thanks to the Russian scientists who opposed their country’s disastrous whaling expansion and kept its records, we know how many whales were lost in the 20th century. That information can also help scientists, governments and conservationists judge whales’ remarkable but far from complete recovery.

Ryan Jones is an Associate Professor of History at the University of Oregon. He is the author of Red Leviathan: the Secret History of Soviet Whaling.