Is Alito an Incel? We cannot allow our decisions to be affected by any extraneous influences such as concern about the public’s reaction to our work.

I thought I’d comment on one revealing passage from the draft US Supreme Court opinion written by Justice Samuel Alito that would strike down Roe and eliminate the Constitutional right to an abortion.

The summary by Politico of 10 key passages in the decision fails to mention it and I haven’t seen it discussed in other media coverage (NY Times does not mention it either), but it struck me as an important and revealing passage, if not technically of legal significance (but the core legal principle it applies, stare decisis, or respecting precedent, certainly is).

This comes at the very end of the opinion, in the section regarding the legal notion of “reliance”, or how women and society have evolved over the last 50 years and responded to the right to abortion, which Alito summarizes as:

After some 60 pages of what amounts to a Medieval Christian male rant on abortion – and virtual silence on the rights and feelings of the pregnant woman – Alito describes his views on women, their role in society, and the implications of the right to abortion.

It is incredibly revealing and deeply troubling: 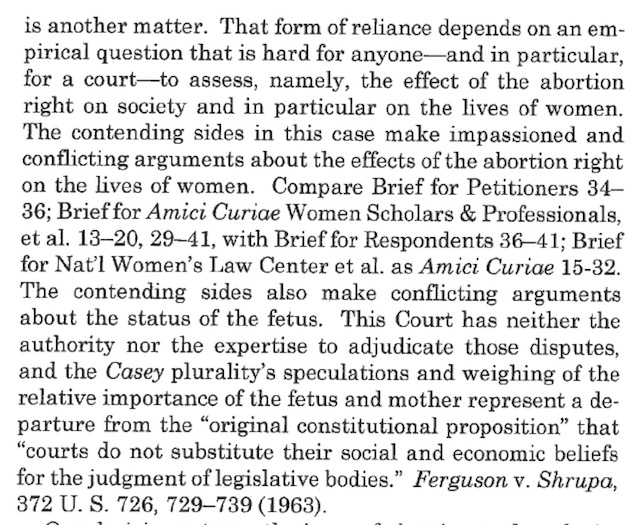 In the preface to that excerpt, Alito dismisses the prior Casey decision’s “reliance” analysis, a social and “intimate relations” concept of legal “reliance”, in favor of a far more narrow “property and contract rights” doctrine: 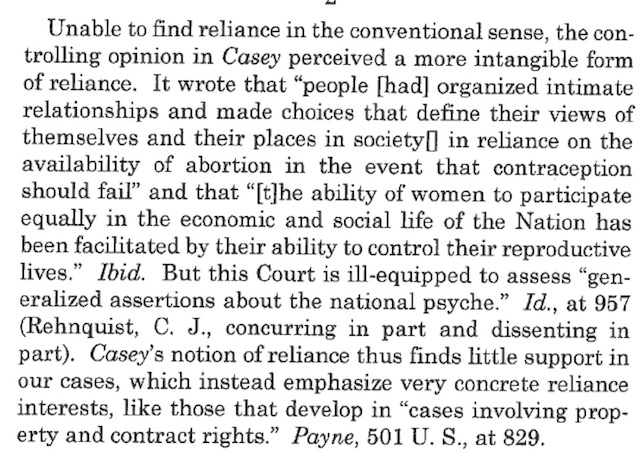 “Intimate relations” can’t be considered – they’re not matters of “property and contract rights”.

No consideration given to all this “feminine” stuff, which is dismissed as merely “generalized assertions about the national psyche”.

How twisted is that?

Finally, again not quoted in the corporate media, Alito goes out of his way to give us all the middle finger:

“We cannot allow our decisions to be affected by any extraneous influences such as concern about the public’s reaction to our work.”

So, does Alito’s arrogance and ignorance remind one of – the stench – of the Court’s most historical outrage? How about this (from the infamous Dred Scott decision):

[African Americans] had for more than a century before been regarded as beings of an inferior order, and altogether unfit to associate with the white race, either in social or political relations; and so far inferior, that they had no rights which the white man was bound to respect; and that the negro might justly and lawfully be reduced to slavery for his benefit. He was bought and sold, and treated as an ordinary article of merchandise and traffic, whenever a profit could be made by it.

Alito believes that Women have No reproductive rights the white man need respect!

With respect to loss of legitimacy and credibility, I gave up on the Court after Bush v. Gore (2000).

Linda Greenhouse at the NY Times makes the same point I do, so I’ll take that as a vote of confidence, see: “Justice Alito’s Invisible Women”

Granted that the young Samuel Alito, as a recent Princeton graduate, joined an organization of conservatives who sought to limit the inclusion of women at his alma mater. Granted that he has made clear his desire to overturn Roe since even before his days on the court. It is still astonishing that in 2022 he would use his power to erase the right to abortion without in any way meaningfully acknowledging the impact both on women and on the constitutional understanding of sex equality as it has evolved in the past half-century.  ~~~ end update

Here is a wonderful far more nuanced and historical analysis – examines the role of slavery and racism, but also echoes and expands my points about contract and property and the absence of women and society:

Men in the courts and Congress of the nineteenth century understood contracts.They understood a little bit about labor. Women they understood wholly by their sex and wombs, and those—at a time when all women were under a form of vassalage—they regarded as the property of husbands once owners exited the stage. […]

It is astounding, reading the Roe decision today, how absent the woman is. In the majority’s tortuous historical review, her lived experience emerges in faintest outline, and then only in others’ professed interests in her health and life.