India’s Farm Crisis: “We Will Protest as Long as Possible” 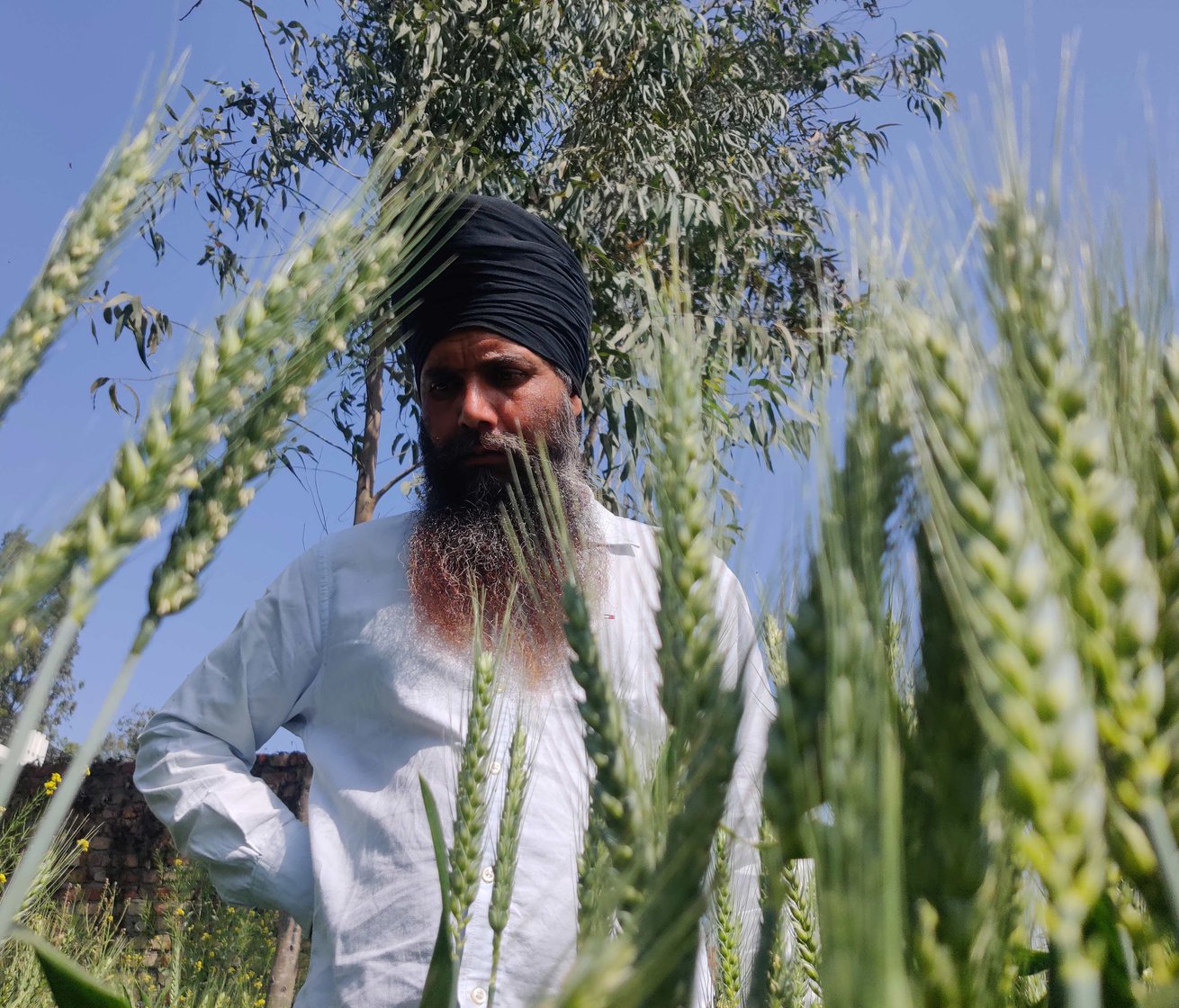 “No parent should experience the trauma of losing a child,” says Sirvikramjeet Singh Hundal, father of Navreet Singh, who died on January 26, during the farmers’ tractor rally in Delhi.

At their home in Uttar Pradesh’s Dibdiba village, Navreet’s portrait rests against a wall of the room where Sirvikramjeet, 45, and his wife, Paramjeet Kaur, 42, have been receiving visitors coming to offer their condolences. Their son’s death has left an irrevocable void in the parents’ lives. “He helped me in the farm. He cared for us. He was a responsible child,” says Sirvikramjeet.

Navreet, 25, had gone to Ghazipur, on the Delhi-UP border, to take part in the Republic Day rally in Delhi. His grandfather, Hardeep Singh Dibdiba, 65, had been camped there since the farmers’ protests began at Delhi’s borders on November 26, 2020. Navreet was driving a tractor, which overturned at the security barricades set up by the Delhi Police on Deen Dayal Upadhyay Marg.

While the police say that Navreet died because of injuries he sustained when the tractor toppled, his family believes he was shot before the accident occurred. “We will prove it in court,” says Srivikramjeet, referring to the petition filed by Hardeep Singh in Delhi High Court, seeking an official inquiry into the cause of Navreet’s death.

Since the tragedy, farmers in northwest UP’s border district of Rampur – where Dibdiba is located – have become more determined to press on with their demand for a repeal of the new farm laws introduced by the central government in September 2020. Across the border from Rampur, in Uttarakhand’s Udham Singh Nagar and Kashipur districts, in the Kumaon region, the resolve of the farmers is just as strong. 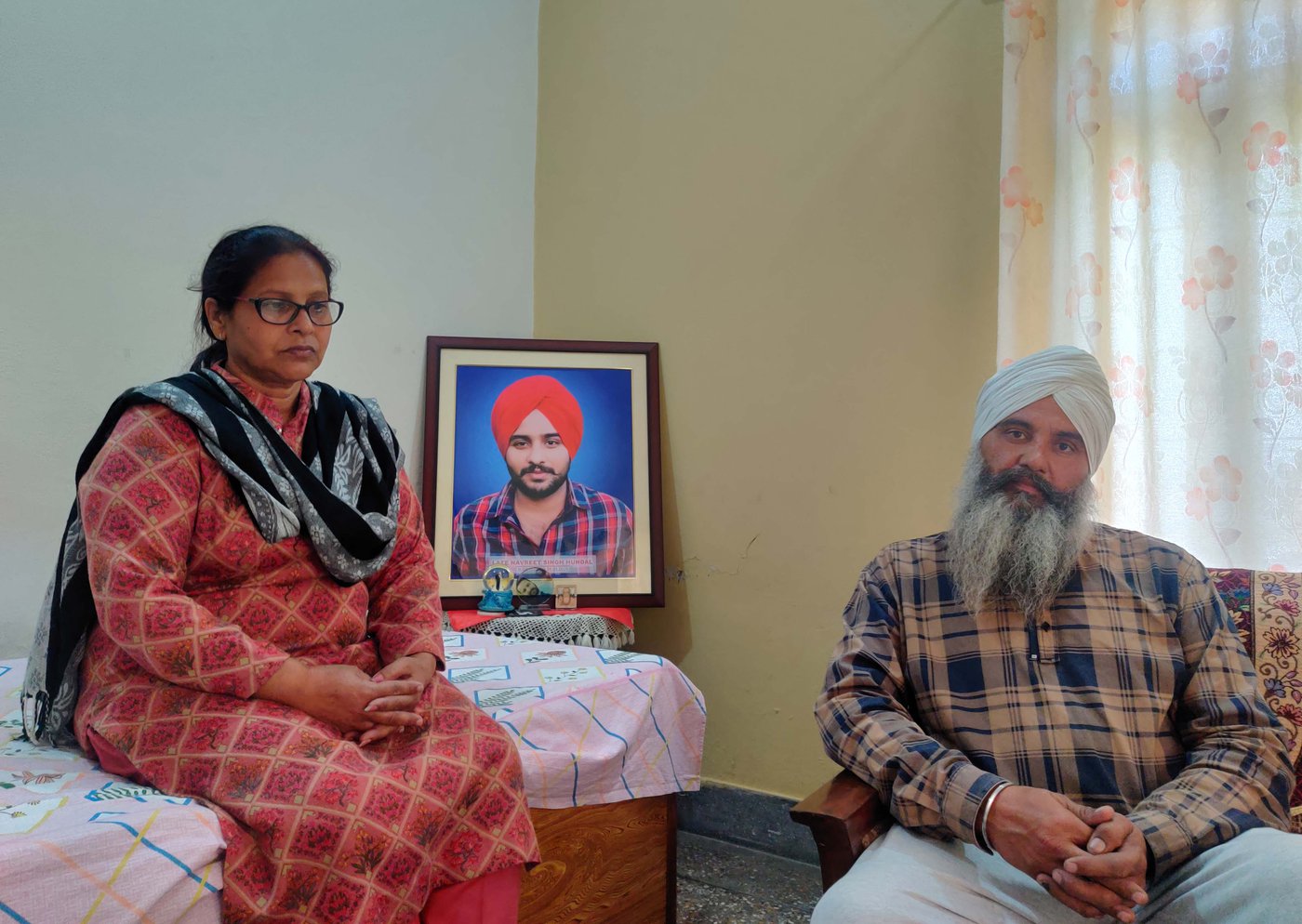 Left: The death of their son, Navreet Singh (in the framed photo), has left a void in Paramjeet Kaur (left) and Sirvikramjeet Singh Hundal’s lives. Photo: Parth M.N.

About 15 kilometres from Dibdiba, in Udham Singh Nagar’s Saijani village, farmer Sukhdev Singh, 42, says, “The boy [Navreet] was from a nearby village, not far from here. After he died, the farmers here became more determined [to protest].”

From when the protests first began at Delhi’s borders, Uttarakhand’s farmers have been there with other farmers, mainly from Punjab, Haryana and UP, to oppose the three new farm laws. Uttarakhand is farthest from the national capital when compared to the other three states, but the distance hasn’t dissuaded the state’s farmers from lending their voice at Ghazipur.

When the famers from Udham Singh Nagar and Kashipur started marching towards Delhi in November, getting there was not easy, says Sukhdev. The UP Police stopped them at the state border, on the Rampur-Nainital highway (NH 109). “We stayed on the highway for three days and nights. The police tried everything to send us back. We were allowed to pass through eventually, when they realised we were not going to back down.”

The farmers have been making the long journey from their homes because the new farm laws will destroy their livelihoods, says Sukhdev, who owns 25 acres of land in Saijani, which is in Udham Singh Nagar’s Rudrapur tehsil . The laws they have been opposing are The Farmers’ Produce Trade and Commerce (Promotion and Facilitation) Act, 2020 ; The Farmers (Empowerment and Protection) Agreement on Price Assurance and Farm Services Act, 2020 ; and The Essential Commodities (Amendment) Act, 2020 .

These laws, say the farmers, undermine the main forms of support to the cultivator, the farmers, including the minimum support price (MSP), the agricultural produce marketing committees (APMC), state procurement and more.

Sukhdev accepts that the existing APMC mandi system is not the best sales outlet for farmers. “We never said it was perfect. We need reforms.” But the question is, reforms for whom – farmers or the corporate world?

At times, the mandis find fault in the quality of the harvest and refuse to buy it, adds Sukhdev. “We have to camp at the mandis for days before they buy from us. And even after that, the money does not come through on time,” says Sukhdev. “I sold about 200 quintals of paddy at a mandi in October 2020. “I still haven’t received about Rs. 4 lakh for it.”

In Dibdiba, where Sirvikiramjeet and Paramjeet own seven acres of farmland, the situation is slightly different. “The government mandi is close by, so I sell most of my harvest at the MSP. It is very crucial for our survival,” says Sirvikramjeet, who cultivates paddy in the kharif season and wheat during rabi .

Across the border, farmers in Saijani sell their unsold stock to private traders. “We sell it to them at lower rates,” says Sukhdev. Yet, the MSP is a benchmark for farmers when the mandis don’t buy, says Sirvikramjeet. “If the MSP for rice stands at Rs. 1,800 per quintal, private traders procure it for around Rs. 1,400-1,500,” he adds. “If the government mandis lose their utility, then the private traders will have free rein.”

The ‘reforms’ brought in by the government are not wanted by the farmers, says Sukhdev. “Instead of passing a law that weakens the mandi system, the government should focus on expanding it so that more farmers have an assured market.”

The new laws have been criticised for giving large corporates greater power over farmers and farming. “The entry of the private sector is never good news. They have a simple rule: to make profits at any cost. They won’t think twice before exploiting the farmers,” says Sukhdev.

After their principled march towards Delhi in the early days of the farmers’ protests, Uttarakhand’s farmers have adopted a more strategic approach. Since the end of January, they have been taking turns to camp at Ghazipur, with about 5-10 farmers from each village leaving at a time and returning after 1-2 weeks.

After their principled march towards Delhi in the early days of the farmers’ protests, Uttarakhand’s farmers have adopted a more strategic approach. They take turns to camp at Ghazipur, with about 5-10 farmers from each village leaving at a time

“We maintain a presence at the [Delhi] border and, at the same time, we work on the farms back home. We spend not more than a week or two at a stretch. It keeps everyone charged,” says Sukhdeo Chanchal Singh, 52, a 20-acre farmer in Saijani. “This way, we will carry on with the protests for as long as possible.”

When a member of the family is away, the rest of the family keeps the household going, says Baljeet Kaur, 45. “We have three buffaloes that I look after,” she says, while cleaning dishes in the verandah of her home in Saijani.

“Besides, looking after the household, cleaning and cooking is all on me. My 21-year-old son looks after the farm when his father is away.”

Baljeet’s husband, Jaspal, 50, has gone to Ghazipur twice – the last time was from the end of February to first week of March. She says, she does not sleep well when he’s away. “The good thing is that the whole village is supporting one another. If my husband is away, then someone else will water the crop in case my son can’t.”

It is such support and solidarity that has helped Sirvikramjeet and Paramjeet in their time of grief. “We are united by our occupation [farming],” says Sirvikramjeet. “Farmers from Uttarakhand, Punjab and Haryana, many of them strangers, have come to console us.”

“We are getting by because people around us have been our strength,” adds Sirvikramjeet. “If only this government had half the empathy shown by the farming community, it would have repealed the three farm laws.”