Political Science and the Fate of the Wolverine

On December 14, 2020, 24 organizations and one individual (me) filed two different lawsuits to challenge the U.S. Fish and Wildlife Service (FWS) decision not to list the wolverine as a threatened Distinct Population Segment (DPS) under the Endangered Species Act (ESA). The plaintiffs are arguing the FWS decision was capricious and arbitrary.

The wolverine, a member of the weasel family, is a snow dependent animal.  Snow is an essential feature of his habitat and, as such, is a critical indicator of ecosystem health considering climate change.

Once found across the northern tier of states from Maine across the Upper Mid West (Michigan Wolverines) to the Rockies, including the Northern Rockies of Idaho, Montana, and Wyoming,  and down the spine of the southern Rockies to Colorado and New Mexico. Wolverine were also present in the higher elevations of the Cascades and Sierra Nevada from Washington to California. Unrestricted trapping and hunting led to the animal’s decline across much of its former range. The practice of placing poison in carcasses to kill wolves and coyotes may have also played a role.

Today there are only an estimated 300 or so wolverine in the lower 48 states, primarily in Montana, Idaho, and Washington, with a few animals known for Wyoming and Oregon. The small fragmented population makes the wolverine vulnerable to extinction due to unpredictable stochastic events.

Because females may not breed until they are two years of age, and males may breed more than one female, the “effective” breeding population is limited. For instance, in the Northern Rockies, where the most significant number of wolverines are found, the effective breeding population is approximately 35-40 individuals, reducing overall genetic diversity.

Conservation organizations argue that climate change is the biggest threat to the wolverine in the lower 48 states.

However, disturbance of denning females due to increasing backcountry recreation by snowmobiles, skiers, and snow bikes in subalpine terrain may be a growing threat, especially as snow availability for both recreationists and wolverines shrinks due to climate change.

Incidental trapping of the wolverine is also a concern since traps set for other animals like coyotes or wolves could occasionally capture a wolverine. If the trapped animal is a female, it could mean losing any young wolverine in a den, multiplying the loss. In small sub-populations that may only contain 8-10 animals, such a failure may be enough to cause the subpopulation to wink out.

The effort to garner protection for the wolverine and its habitat and the resistance from the Fish and Wildlife Service to list the species demonstrates the politics surrounding Endangered Species listing process. According to the law, listing decisions must be based on the best available science, but science frequently takes a backseat to politics.

The first effort to list the wolverine under the ESA occurred in 2000. Since that time, conservationists have had to sue the FWS five times. According to the ESA, a species can be deemed endangered or threatened due to threats across a significant portion of its range.

For instance, while grizzly bears are relatively abundant in northern Canada and Alaska, the Greater Yellowstone Ecosystem’s grizzly population is considered a DPS.

In 2010, the FWS determined that the wolverine in the lower 48 states were a Distinct Population Segment (DPS).

Due to habitat loss and climate change, the FWS concluded that listing under the ESA was warranted.  The FWS estimated by there would be a 63% loss of habitat due to climate change by 2100.

The FWS determined that the current regulatory mechanisms were insufficient to protect the wolverine from climate change.

In 2013, the FWS proposed listing of the wolverine under the ESA, but later withdrew its support for listing in 2014. A court agreed that this decision was invalid and remanded the FWS’s decision to reconsider its decision.

In response to the court order, the FWS prepared a species status assessment. The assessment was shared with industry and state wildlife agencies but not with the original petitioners for species listing. To see the assessment, these groups had to file a Freedom of Information Act request.

The wolverine is the largest member of the weasel family, but unlike its long, thin relatives, it is more chunky and looks something like a bear cub. This more compact surface to volume ratio helps it to remain warm in the winter. It also possesses a thick coat inner layer of wooly fur and outer guard hairs (which has made it a desirable fur-bearing animal for trappers). Its feet are broad, like mini snowshoes, for traveling on snow surfaces. In short, it is beautifully adapted to cold, snowy environments. 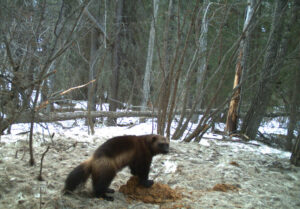 Wolverine are the size of a small bear cub. Photo NPS.

The wolverine eats just about anything it can catch or find, including small mammals (snowshoe hares and squirrels), birds, fruit, and carrion. They are reputed to kill larger prey like deer that are floundering in deep snow. They have incredible jaws designed to crush bones.

They have huge territories. Even a preserve the size of Glacier National Park only supports 30-40 animals.

This requires an immense landscape of connected habitats. If the wolverine is to be protected, it must have sufficient wilderness habitat like that proposed by the Northern Rockies Ecosystem Protection Act.

Years ago, I attended a lecture in Missoula by wildlife biologist Maurice Hornocker who is most famous for his studies of cougars in the Idaho wilderness. However, in addition to cougars, Hornocker initiated a survey of wolverine in Montana.

I remember two startling facts from his talk. The first was how difficult it was to trap a wolverine. They used one of those bear traps constructed of a culvert pipe section with a gate built of cyclone fence. They learned they had to check their traps frequently because the first wolverine they trapped chewed a hole in the cyclone fence gate and escaped.

After they successfully trapped a wolverine and installed a radio collar on it, they were amazed to find the animal traveled from Glacier National Park south about a hundred miles through the Bob Marshall Wilderness to Lincoln, Montana, reversing course and returning to Glacier—all in a week.

Since that time, long-distance travel by other wolverine has also been documented.

I have been fortunate to observe wolverine in the wild. The first one I ever saw was along the Ocean River on the Alaskan Peninsula. I was fishing, and out of the corner of my eye, I noticed an animal looping along the opposite bank. At first, I thought it was a bear cub. Thinking that Mom might be near-by, I started to wade to shore in preparation to exit the immediate vicinity. But I soon realized that I was watching a wolverine.

My second sighting was during a March ski trip to Grinnell Lake in Glacier National Park. As I was skiing across Lake Josephine, I spotted a wolverine running along the opposite lakeshore.

A third sighting was on a snowshoe trip in the Mission Mountain Wilderness of Montana.

In addition, I’ve seen wolverine tracks while skiing in the Great Burn proposed wilderness on the Idaho Montana border and the Boulder-White Cloud Wilderness of Idaho, as well as in several places in Alaska, including the Gates of the Arctic National Park. 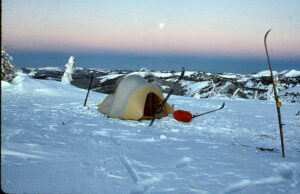 If one wants to learn more about wolverine, Doug Chadwick’s The Wolverine Way is the best book on the topic.

Almost all of the known den sites location for wolverine have been located in areas of persistent snow. In a 2010 study, Jeff Copeland compared wolverine denning observations of 562 individuals in North American and elsewhere (Europe) and found a 100% overlap with snow cover. Further refinement by Kevin McKelvey and colleagues (2011) found that “31 percent of current wolverine habitat in the contiguous United States will be lost due to climate warming by . . . 2045” and “[t]hat loss expands to 63 percent of wolverine habitat by . . . 2085.”

The wolverine also uses snow as a natural refrigerator. If it finds a carcass, it will stash the meat in a snowbank and maybe come back months later to dine on it.

The FWS had seven experts review its scientific conclusions, and five out of the seven agreed with the Service’s conclusion that climate change was a threat to the wolverine and that listing was warranted.

Despite all this support from scientists, in August 2014, the FWS withdrew its proposal to list the wolverine as a District Population Segment, arguing that the wolverine’s habitat’s threats were not as severe as initially believed.

Furthermore, despite the low numbers and effective breeding population, the FWS incredibly determined the wolverine was not threatened by limited genetic diversity or fragmented subpopulations.

Defenders of Wildlife immediately challenged the FWS reversal. The court agreed with Defenders that the FWS erred when it claimed the climate change and a reduction in snow cover would not harm the wolverine’s survival. The court also upheld the Service’s original conclusion that the lower 48 state wolverine qualified as a District Population Segment.

In 2017 the FWS completed a draft Species Status Assessment (SSA) and sent it to the states and industry to review, but not to the wolverine scientists who in 2013 supported listing the general public or conservationists.

As might be expected, state wildlife agencies opposed the wolverine as a Distinct Population Segment (one has to wonder why states are opposed to a listing of any endangered species), including Montana and Idaho. In addition, American Petroleum Institute, Western Energy Alliance, Utility Air Regulatory Group, and the International Snowmobile Manufacturer’s Association all objected to the wolverine’s listing.

The FWS had its SSA peer-reviewed. Some peer reviewers questioned the overall conclusions of the study. As one reviewer wrote: “Conclusions were made based on little or no evaluation of the scientific information.”

In their final published SSA, the FWS discounted much of the earlier science, concluding that wolverine were “adaptable” and not necessarily dependent on snow cover. And besides, the FWS asserted that there would remain enough snow to support wolverine den habitat even in a warming trend. The FWS also argued that wolverine in the United States were contiguous with Canadian populations, thus not a Distinct Population Segment.

Though there is some dispersal by wolverine, it doesn’t mean that genetic isolation isn’t a problem. For instance, a wolverine that turned up in a trail camera near Lake Tahoe turned out to be genetically related to wolverine in the Sawtooth Mountains of Idaho.

In 2014 another wolverine was captured on a trail camera in Utah’s Uinta Mountains.

It is important to note these were lone males moving into habitat that lacked females. The FWS used these long-distance dispersals to argue genetic isolation wasn’t a problem.

In its 2020 decision to withdraw the wolverine from the ESA listing, the FWS used all the above rationale to justify its position.

However, according to the ESA, a species can be considered “distinct” if there are physical barriers or management differences across International Borders. There is limited movement of US animals into Canada, in part, due to the presence of major trans Canadian transportation corridors (railroads, Trans Canadian Highway, Highway 3 along the US border, as well, trapping is permitted in Canada.

The plaintiffs are arguing the FWS did not use the best available science to withdraw its recommendation for Distinct Population Segment and failed to adequately analyze the cumulative threats posed by climate change, increasing winter recreation, incidental trapping, small population size, fragmented habitat, and low genetic diversity.

The science supports the listing of the wolverine. Climate change may be the most significant long-term threat,  but political opposition is the wolverines most immediate threat.