When former secretary of defense Robert M. Gates retired from the Obama administration in 2011, he explained that he could no longer support a president who favored a smaller military that would be “able to go to fewer places and do fewer things.”  Gates said that he couldn’t imagine “being part of [such] a nation, part of [such] a government.”  Nearly a decade later, he has written a so-called “insider’s account” that touches on the limits of military power—but provides no recommendations for demilitarizing the national security process.  Gates’ “Exercise in Power: American Failures, Successes, and a New Path Forward in the Post-Cold War World” requires a two-part review.  The first part will be a review of Gates’ record in the government, particularly his politicization of intelligence on the Soviet Union.  The second part will discuss the inadequacies of the book and provide a strong case for demilitarization—with recommendations about what needs to be done.

As with any book by Gates, there needs to be the standard warning of “caveat emptor.”  This is particularly true for “Exercise in Power” in view of Rachel Maddow’s obsequious interview of Gates last month in which she described the former director of the Central Intelligence Agency as a “public intellectual.”  In the New York Times’ book review of July 5, 2020, Gideon Rose, the editor of “Foreign Affairs,” concluded that Gates “is cut from the same cloth” as the soldier-statesman George C. Marshall.  Rose sees Gates as the “insiders’ insider” and notes that Gates has been “involved in making history over the last 30 years.”  I believe that neither Rose nor Maddow is familiar with Gates’ role in that history from 1981 to 2011.

In the 1980s, Gates served as the deputy director of intelligence to CIA director William Casey, a partnership responsible for the politicization of intelligence on key issues of the day, particularly the exaggeration of the power and influence of the Soviet Union.  Gates prides himself as a Kremlinologist, but he was not only completely wrong about Soviet politics and policy, but he made sure that the CIA’s intelligence directorate was wrong as well.  In “Exercise of Power,” Gates still contends that the “CIA saw the [Soviet] collapse coming.” Former CIA director Stansfield Turner, former secretary of state George Shultz, and former chairman of the Joint Chiefs of Staff Colin Powell know better and have testified, among many others, to the CIA’s corporate failure on the Soviet Union’s dissolution in 1991.

Shultz’s description of Gates in his memoir, “Turmoil and Triumph: My Years as Secretary of 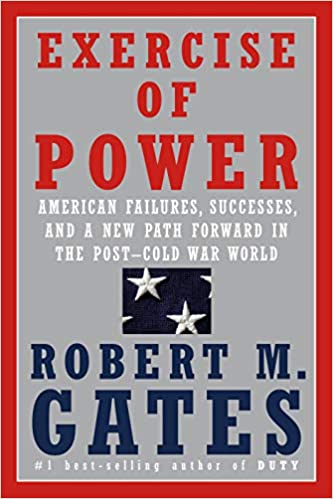 State,” is searing.  He charges Gates with trying to “manipulate” him.  Shultz tells Gates he was “usually wrong” about the Soviet Union, having dismissed Mikhail Gorbachev’s policies as “just another attempt to deceive us.”  The memoirs of former secretary of state James Baker, “The Politics of Diplomacy,” corroborates Shultz’s description of Gates as someone who manipulated the process and tried to undermine the pursuit of detente with the Soviet Union.  Both Shultz and Baker were trying to move Presidents Ronald Reagan and George H.W. Bush toward a detente that Gates, an anti-Soviet ideologue, was trying to block.

When Casey died in 1986, Reagan nominated Gates to be the director of central intelligence, but Gates had to withdraw from the confirmation process.  His good friend on the Senate intelligence committee, chairman David Boren (D-OK), called Gates at home to tell him that key members of the committee didn’t believe his denials of knowledge of Iran-Contra and that he would not receive the committee’s recommendation for confirmation. On his one day before the committee, Gates drew gales of laughter from the committee when he referred to Casey, arguably the worst director in CIA history, as a model CIA director, and referred to himself as someone who would have resigned from the CIA if he had known about the “off-the-shelf” capability to run the Iran-Contra operation out of the National Security Council.

Gates certainly knew about Iran-Contra.  Lawrence Walsh, the independent counsel for the investigation of Iran-Contra, told Senator Boren that he “doubted Gates’ veracity” and that there were troubling areas suggesting Gates had falsely denied knowledge of the Contra-support activities.  I’ve known Gates for more than 50 years and can testify to his excellent memory, so it is noteworthy that he testified 33 times that he had no recollection of facts regarding Iran-Contra.  In his book, “Firewall: The Iran-Contra Conspiracy and Cover-Up,” Walsh concluded that the pardons President George H.W. Bush gave to former secretary of defense Casper Weinberger and others “prevented the rule of law being applied to perpetrators of criminal activity of constitutional dimension.”  Bush’s attorney general, who guided the pardon process, was none other than today’s attorney general, William Barr.

In 1991, President Bush nominated Gates once again to be director of central intelligence.  I was a whistleblower and the lead witness in an effort to block his confirmation.  The Senate intelligence committee’s opposition to Gates galvanized over his politicization of intelligence regarding the Soviet Union, Central America, and Southwest Asia.  As in 1986, Gates continued to defend Casey from charges of politicization.  After his short tenure as CIA director ended and Casey was long dead, Gates stopped referring to him as the “model CIA director.” He began to refer to him more accurately as someone who had corrupted the intelligence process.

Gates finally acknowledged watching Casey “on issue after issue, sit in meetings and present intelligence framed in terms of the policy he wanted pursued.”  Gates left unmentioned the fact that on issue after issue, he sent informal memoranda to Casey providing ammunition in support of those policies, typically involving use of force or covert action.  His recommendations for use of force against Nicaragua and Libya in the 1980s are interesting in view of his discussion of force in “Exercise of Power.”  Both Casey and Gates were particularly guilty of the kind of policy advocacy that CIA leaders are foresworn to avoid.

Gates also used his obsequious memoranda to promote himself as someone who could reverse the “advanced case of bureaucratic arteriosclerosis” that existed at the CIA.  According to Gates, the halls of the CIA were filled with “plodding mediocrities counting the days until retirement,” which he called the major cause of the “decline in the quality of our intelligence collection and analysis over the last fifteen years.”

I provided rhyme and verse to Senator Bill Bradley (D-NJ) on Gates’ distortions of intelligence on the waning strength of the Soviet Union and the interest of Soviet leaders in pursuing arms control and disarmament as a path to Soviet-American detente; this was the source of Shultz’s anger toward Gates.  Gates thoroughly missed Moscow’s strategic retreat from the Third World and the destruction of the Soviet system at home.  Nevertheless, when he took over the directorate of intelligence in 1982, he told senior intelligence analysts that their work was “often proved inaccurate,” that it was “too fuzzy to judge whether it was even right or wrong.”

Gates’ short spell as CIA director lasted only 14 months, but it was marked by an interesting contretemps.  In March 1992, Senator Joe Biden (D-DE) summoned Gates because of the latter’s politicization of intelligence on China, designed to support the Bush administration.  Since Biden was not a member of the Senate intelligence committee, this dressing down was unusual.  Biden was particularly concerned that Gates, who had just survived a confirmation hearing that turned on the issue of politicization, had not carried out his pledge to introduce competitive analysis in CIA’s intelligence assessments in order to minimize the problem of politicization.

The fact that Senator Biden would not vote to confirm Gates as director of central intelligence presumably explains Gates fulsome criticism of Biden in his earlier writings.  Gates stated that Biden was “wrong on nearly every major foreign policy and national security issue over the past four decades.”  Obviously, Gates had not forgotten that, when Biden voted again confirmation of Gates as CIA director, he stated that he was “disappointed with Gates’ analytical skills, especially in regard to the Soviet Union.”