This is Not a Border Wall

Last Saturday, a few hundred border residents, including myself, gathered to register our discontent with the ongoing and escalating militarized assault on the borderlands waged by the Trump administration, and by administrations before that. We assembled down in Santa Teresa, New Mexico, just west of the Port of Entry there, where federal contractors have broken ground on what is to be 20 miles of newly installed 18-foot steel wall, sunk 6 feet into the red Earth.

A picture I took of the western front of the wall was widely shared on Facebook, and as a result the post got flooded with comments from the general social media public. There was the unsurprising slew of Trump die-hards, lost souls to a toxic ideology. I don’t really engage these sad folks – healing the social wound that is American Naziism will likely not look like shooting memes back and forth on social media. But one commenter was a partisan Democrat pushing an initially surprising YouTube video of CNN’s Jake Tapper “fact-checking” Trump’s “claims” that he is building his wall. Tapper’s mind-trip conclusion? There is no wall. And his viewers’ response? Nothing to see here. Why so upset?

CNN’s 3-minute video clip, which you should see for yourself, is focused on “debunking” Trump’s claim that he’s begun building the wall. Jake Tapper practically rolls his eyes as he ranks the claim “Mostly False,” even while admitting that an 18-foot steel barrier is being erected, right now, along 40 miles of the southern border that previously had no barrier. (It’s not clear whether Tapper neglects to mention the 20 miles in southern New Mexico, the site of our demonstration, where wall is replacing vehicle barriers, or whether he mistakenly rolled us into his 40-mile figure. His “fact check” was light on facts that matter.) Tapper makes a lot of hay out of a distinction between a “fence” and a “wall” – a distinction he pulls, crucially, from Trump’s own tweets – and points out that the design going up in southern New Mexico is different from the prototypes being shown in San Diego. He also reveals that the $1.6B currently being spent on border wall development was allocated by Congress in a way different from what Trump had originally sought. Therefore, the 18-foot steel thing going up in our backyard isn’t truly Trump’s wall – “not really.” The claim is mostly false! Feel better?

What facts are missing from Tapper’s checking of them? What essential truth is obscured behind “Mostly False”? For starters, what about the fact that 18-foot impenetrable steel barriers across the border region threaten and contribute to the extinction of over 100 protected species, including large migratory mammals like Mexican grey wolves (who know neither the words “wall” nor “fence”)? Or what about the fact that the sites of border walls are chosen in part to deliberately funnel desperate migrants, with children in tow, into more dangerous, increasingly fatal, routes across the Chihuahuan and Sonoran deserts? What about the fact that the 18-foot steel thing, whatever you call it, is being built without any environmental review or public input, thanks to a little-known but often-used provision of the post-9/11, Bush-era, Secure Borders Act (2005) that allows the Department of Homeland Security to waive all laws – all laws! – in service of anything they claim to be relevant to border security? On that matter, what about the fact that no government agency has ever produced a report concluding the 18-foot steel thing indeed advances border security at all? Shouldn’t CNN’s viewers know these facts, too? And what about the fact that 400 local residents gathered last week, arm in arm, at the site of the 18-foot steel thing, to protest not only its construction but all elements of border militarization, including detention centers, unconstitutional police tactics, illegal killings, family separation, and environmental destruction, all in one unified display of intersectional, popular solidarity? Has Jake checked these facts? Do his viewers see us?

Jake Tapper looks his viewers straight in the face and says, “This is not a border wall. This is fencing.” My lying eyes! Why is CNN producing this content? I don’t know, but it’s hard to miss that Tapper’s argument aligns 100% with what Democrats in the Senate would like the public to believe – that they have blocked Trump’s wall through budgetary maneuvering (nevermind the steel, uh, fence?). It’s worth noting, we activists on the ground saw this coming last year, as these budget fights played out. As money was appropriated to replace existing 3-foot vehicle barriers with 18-foot steel bollard wall, I promise, we called it: “Republicans will say this is the wall, Democrats will say there was no money for new wall, both sides will score a ‘W’, and their respective bases, consuming entirely disjunct media, will happily gobble it up.” What you call a win-win. CNN is in the game, of course – the network chooses to promulgate this partisan spin as objective fact, and with no small sneer. Their host is entirely concerned with assuring his viewers that Trump is a big fat liar. A regular Edward R. Murrow, to be sure! What does Jake believe he’s accomplishing, by “calling out” Trump in this way? I couldn’t say, but I know the result is a petty, narrow language game tailored to make Democratic donors feel generous and to gaslight the popular left. It certainly doesn’t do a damn thing to help those of us on the ground fighting this rot, or to mobilize more to join us. It neither represents reality nor helps anyone create a new one. And that seems to be the point.

The people, cultures, and web of life in the borderlands are no less erased by Jake Tapper than by Donald Trump. Jake Tapper does not even mention the name of the locations where the 18-foot steel thing is going up. We live in Doña Ana County, Jake. And it’s a damn wall! In this political theater of the absurd, Tapper and Trump stand together, center stage, directing their audience(s)’s eyes away from the black death creeping in the wings.

Here’s my photo, and CNN’s video below that. Check the facts for yourself, and then pick a side. 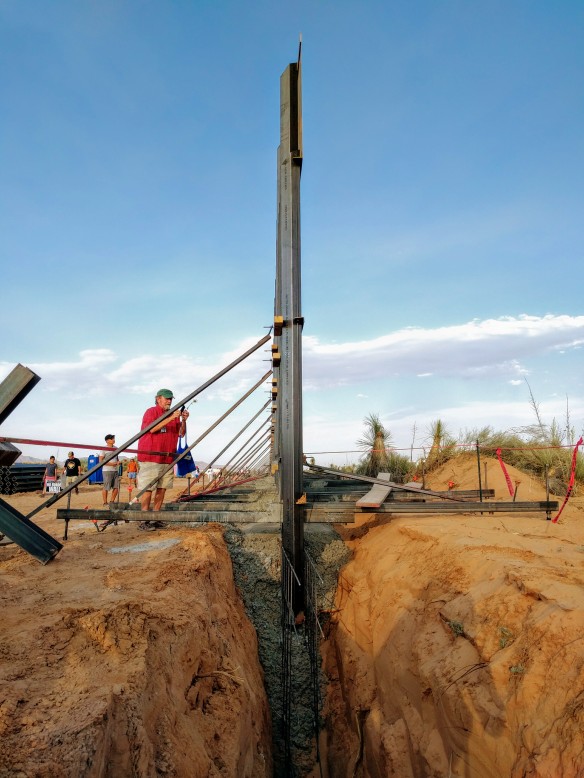 Peter Sloan is a writer and composer. He lives in Las Cruces, New Mexico.