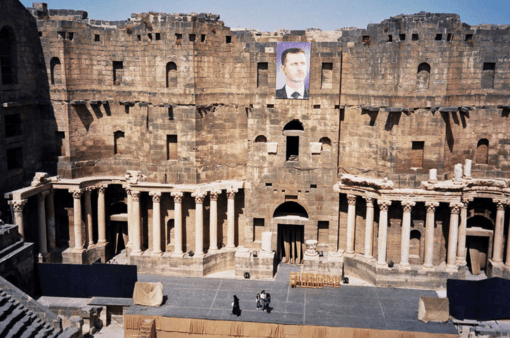 Investigative journalist Gareth Porter has published two exclusives whose import is far greater than may be immediately apparent. They concern Israel’s bombing in 2007 of a supposed nuclear plant secretly built, according to a self-serving US and Israeli narrative, by Syrian leader Bashar Assad.

Although the attack on the “nuclear reactor” occurred a decade ago, there are pressing lessons to be learnt for those analysing current events in Syria.

Porter’s research indicates very strongly that the building that was bombed could not have been a nuclear reactor – and that was clear to experts at the International Atomic Energy Agency (IAEA) even as the story was being promoted uncritically across the western media.

But – and this is the critical information Porter conveys – the IAEA failed to disclose the fact that it was certain the building was not a nuclear plant, allowing the fabricated narrative to be spread unchallenged. It abandoned science to bow instead to political expediency.

The promotion of the bogus story of a nuclear reactor by Israel and key figures in the Bush administration was designed to provide the pretext for an attack on Assad. That, it was hoped, would bring an end to his presidency and drag into the fray the main target – Iran. The Syrian “nuclear reactor” was supposed to be a re-run of the WMD deception, used in 2003 to oust another enemy of the US and Israel’s – Saddam Hussein of Iraq.

It is noteworthy that the fabricated evidence for a nuclear reactor occurred in 2007, a year after Israel’s failure to defeat Hizbullah in Lebanon. The 2006 Lebanon war was itself intended to spread to Syria and lead to Assad’s overthrow, as I explained in my book Israel and the Clash of Civilisations.

It is important to remember that this Israeli-neocon plot against Syria long predated – in fact, in many ways prefigured – the civil war in 2011 that quickly morphed into a proxy war in which the US became a key, if mostly covert, actor.

The relevance of the nuclear reactor deception can be understood in relation to the latest efforts by Guardian columnist George Monbiot (and many others) to discredit prominent figures on the left, including Noam Chomsky and John Pilger, for their caution in making assessments of much more recent events in Syria. Monbiot has attacked them for not joining him in simply assuming that Assad was responsible for a sarin gas attack last April on Khan Sheikhoun, an al-Qaeda stronghold in Idlib province.

Understandably, many on the left have been instinctively wary of rushing to judgment about individual incidents in the Syrian war, and the narratives presented in the western media. The claim that Assad’s government used chemical weapons in Khan Sheikhoun, and earlier in Ghouta, was an obvious boon to those who have spent more than a decade trying to achieve regime change in Syria.

In what has become an ugly habit with Monbiot, and one I have noted before, he has enthusiastically adopted the role of Witchfinder General. Any questioning of evidence, scepticism or simply signs of open-mindedness are enough apparently to justify accusations that one is an Assadist or conspiracy theorist. Giving house room to the doubts of a ballistics expert like Ted Postol of MIT, or an experienced international arms expert like Scott Ritter, or a famous investigative journalist like Seymour Hersh, or a former CIA analyst like Ray McGovern, is apparently proof that one is an atrocity denier or worse.

Monbiot’s latest attack was launched at a moment when he obviously felt he was on solid ground. A UN agency, the Organisation for the Prohibition of Chemical Weapons (OPCW), issued a report last month concluding that the 100 people killed and 200 injured in Khan Sheikhoun last April were exposed to sarin. Monbiot argues that the proof is now incontrovertible that Assad was responsible – a position that he, of course, adopted at the outset – and that all other theories have now been decisively discounted by the OPCW.

There are reasons to think that Monbiot is seriously misrepresenting the strength of the OPCW’s findings, as several commentators have observed. Most notably, Robert Parry, another leading investigative journalist, points out that evidence in the report’s annex – the place where inconvenient facts are often buried – appears to blow a large hole in the official story.

Parry notes that the time recorded by the UN of the photo of the chemical weapons attack is more than half an hour *after* some 100 victims had already been admitted to five different hospitals, some of them lengthy drives from the alleged impact site.

But potentially more significant than such troubling inconsistencies are the conclusions of Gareth Porter’s separate investigation into Israel’s bombing of the non-existent Syrian nuclear reactor. That gets to the heart of where Monbiot and many others have gone badly wrong in their certainty about events in Syria.

Monbiot has been only too willing to promote as indisputable fact claims made both by highly compromised and unreliable western sources and by supposedly reputable and independent organisations, such as international human rights groups and UN agencies. He, like many others, assumes that the latter can always be relied upon to stand apart from western interests and can therefore be implicitly trusted.

That indicates an extreme naivety or possibly the lack of any experience covering on the ground highly charged conflicts in which western interests are paramount.

I have been based in Israel for nearly two decades and have on several occasions taken to task Human Rights Watch (HRW), one of the world’s most esteemed human rights organisations. I have shown that assessments it has made were patently not rooted in evidence or even credible interpretations of international law but in geopolitical considerations.

That was especially true in the case of the month-long fighting between Israel and Hizbullah in 2006. (See here and here.) My concerns about HRW’s work, I later learnt from insiders, were shared in its New York head office, but were silenced by the organisation’s most senior staff.

But Porter helps shine a light on how even the most reputable international agencies can end up similarly following a script written in Washington and one that rides roughshod over evidence, especially when the interests of the world’s only superpower are at stake. In this case, the deceptions were perpetuated by one of the world’s leading scientific organisations: the International Atomic Energy Agency, which monitors states’ nuclear activities.

Porter reveals that Yousry Abushady, the IAEA’s foremost expert on North Korean nuclear reactors, was able immediately to discount the aerial photographic evidence that the building Israel bombed in 2007 was a nuclear reactor. (Most likely it was a disused missile storage depot.)

The Syrian “nuclear plant”, he noted, could not have been built using North Korean know-how, as was claimed by the US. It lacked all the main features of a North Korean gas-cooled reactor. The photos produced by the Israelis showed a building that, among other things, covered too small an area and was not anywhere near high enough, it had none of the necessary supporting structures, and there was no cooling tower.

Abushady’s assessment was buried by the IAEA, which preferred to let the CIA and the Israelis promote their narrative unchallenged.

This was not a one-off failure. In summer 2008, the IAEA visited the area to collect samples. Had the site been a nuclear plant, they could have expected to find nuclear-grade graphite particles everywhere. They found none.

Nonetheless, the IAEA again perpetrated a deception to try to prop up the fictitious US-Israeli narrative.

As was routine, they sent the samples to a variety of laboratories for analysis. None found evidence of any nuclear contamination – apart from one. It identified particles of man-made uranium. The IAEA issued a report giving prominence to this anomalous sample, even though in doing so it violated its own protocols, reports Parry. It could draw such a conclusion only if the results of all the samples matched.

In fact, as one of the three IAEA inspectors who had been present at the site later reported, the sample of uranium did not come from the plant itself, which was clean, but from a changing room nearby. A former IAEA senior inspector, Robert Kelley, told Parry that a “very likely explanation” was that the uranium particles derived from “cross contamination” from clothing worn by the inspectors. This is a problem that had been previously noted by the IAEA in other contexts.

Meanwhile, the IAEA remained silent about its failure to find nuclear-grade graphite in a further nine reports over two years. It referred to this critical issue for the first time in 2011.

Chance for war with Iran

In other words, the IAEA knowingly conspired in a fictitious, entirely non-scientific assessment of the Syrian “nuclear reactor” story, one that neatly served US-Israeli geopolitical interests.

Porter notes that vice-president Dick Cheney “hoped to use the alleged reactor to get President George W Bush to initiate US airstrikes in Syria in the hope of shaking the Syrian-Iranian alliance”.

In fact, Cheney wanted far more sites in Syria hit than the bogus nuclear plant. In his memoirs, the then-secretary of defence, Robert Gates, observed that Cheney was “looking for an opportunity to provoke a war with Iran”.

The Bush administration wanted to find a way to unseat Assad, crush Hizbullah in Lebanon, and isolate and weaken Iran as a way to destroy the so-called “Shia crescent”.

That goal is being actively pursued again by the US today, with Israel and Saudi Arabia leading the way. A former US ambassador to Israel, Dan Shapiro, recently warned that, after their failure to bring down Assad, the Saudis have been trying to switch battlefields to Lebanon, hoping to foment a confrontation between Israel and Hizbullah that would drag in Iran.

Back in 2007, the IAEA, an agency of scientists, did its bit to assist – or at least not obstruct – US efforts to foster a political case, an entirely unjustified one, for military action against Syria and, very possibly by extension, Iran.

If the IAEA could so abandon its remit and the cause of science to help play politics on behalf of the US, what leads Monbiot to assume that the OPCW, an even more politicised body, is doing any better today?

That is not to say Assad, or at least sections of the Syrian government, could not have carried out the attack on Khan Sheikhoun. But it is to argue that in a matter like this one, where so much is at stake, the evidence must be subjected to rigorous scrutiny, and that critics, especially experts who offer counter-evidence, must be given a fair hearing by the left. It is to argue that, when the case against Assad fits so neatly a long-standing and self-serving western narrative, a default position of scepticism is fully justified. It is to argue that facts, strong as they may seem, can be manipulated even by expert bodies, and therefore due weight needs also to be given to context – including an assessment of motives.

This is not “denialism”, as Monbiot claims. It is a rational strategy adopted by those who object to being railroaded once again – as they were in Iraq and Libya – into catastrophic regime change operations.

Meanwhile, the decision by Monbiot and others to bury their heads in the sands of an official narrative, all the while denouncing anyone who seeks to lift theirs out for a better view, should be understood for what it is: an abnegation of intellectual and moral responsibility for those around the globe who continue to be the victims of western military supremacism.