Eating My Bernie Math: How DeBlasio Rescued Clinton and the Banksters from Bernie Kong

Lost in appropriate outrage over Hillary Clinton and New York City Mayor Bill DeBlasio’s “Colored People (or Concerned Politician) Time” skit were the underlying tensions giving rise to the racialized joke. DeBlasio was Clinton’s campaign manager for her successful Senate run in 2000 but waited until mid-Autumn last year to endorse her presidential run. DeBlasio took even longer to begin campaigning on Clinton’s behalf against Bernie Sanders, recently portrayed  on the front page of Tuesday’s New York Post, and elsewhere, as King Kong threatening damsel-in-distress Clinton and the New York skyline. 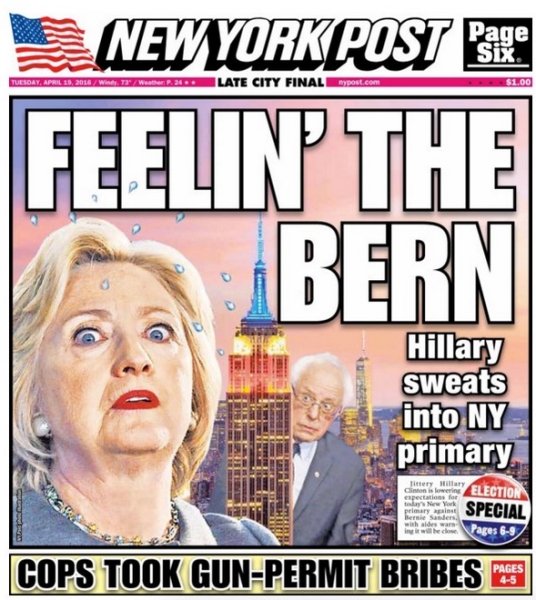 My predictive powers for the Democratic primaries have been a mixed-bag, but never have I been so wrong at such an important time as in New York, and especially New York City. My analysis suggested that polling firms basically had New York City right and were severely discounting Sanders’ strength Upstate.

The polls somewhat discounted Sanders strength Upstate and did not foresee Clinton’s huge win in NYC. The average for the seven polling firms that published their regional splits was a 55-38 advantage for Clinton in the City with six or seven percent undecided.

The average of the four pollsters my scorecard expected to be the best (Quinnipiac, Monmouth, Siena, Baruch) was a 51-39 Clinton advantage with 10% undecided. I expected undecideds to go for Sanders, as in the past, about 3-2 and hoped late momentum might even get him from 55-45 to 53-47 in NYC. He lost the five boroughs by an average of 63-37. At least as importantly, Clinton claimed a draw with 25-44-year-olds, a demographic that DeBlasio won by 50% in 2013 and that my model expected to go for Sanders about 2:1. Even as DeBlasio’s political fortunes have waned and waxed, young people and people of color, key demographics in New York City, have kept the putatively progressive mayor afloatabove 50% popularity.

By way of comparison, Sanders lost in Chicago by less than 10% and the state of Illinois overall by just one delegate. In Illinois, Sanders won the under 45 set by 40%. In New York, he won it by just 10% even though the racialized demographics of Illinois and New York’s Democratic electorate are nearly identical.

In Chicago, Clinton was supported quietly by Rahm Emanuel, whose popularity is at the bottom of the tank. Sanders enjoyed very public and enthusiastic support from Emanuel’s surprisingly strong Latino challenger last Fall, Chuy Garcia. While there are other differences that matter between Chicago and New York, this seems to me by far the most important.

Absent double digit wins in Pennsylvania and Indiana the next two Tuesdays, outcomes neither polling or my Bernie-biased modeling predict, there is absolutely no path for Sanders to win the nomination. There will be a lot of praise for an insurgent campaign that even Bernie originally thought to be nothing more than an issues or protest candidacy and an equal or greater share of blame to go around.

Some of us have counted Democratic politicians such as Elizabeth Warren and DeBlasio as allies in the struggle against Wall Street monstrosity. Their neutrality or active campaigning for the banksters’ favorite candidate bar-none, however, means a significant share of the disappointment and frustration will reasonably be sent their way. Given the outcome however, it’s unlikely to cause Warren and DeBlasio much concern as politicians.

A final note of gratitude for all of you who have read my columns here regularly. I apologize for the false hopes I have created. It’s time to eat my Bernie math and move on.