Several editorials have been published widely in Montana papers and elsewhere by supporters Blackfoot Clearwater Stewardship Act (BCSA) sponsored by Senator Tester.  Many are attacking Senator Daines for his attempt to put a poison pill in the legislation that would remove Wilderness Study designation on over 300,000 acres of Montana federal lands.

The BCSA legislation would designate almost 80,000 wilderness, primarily high elevation basins and drainages along the edge of the existing Bob Marshall and Lincoln Scapegoat Wildernesses.  A small addition to the Mission Mountain Wilderness would preserve a critical wildlife migration corridor. These wilderness designations are welcome. Senator Tester should be commended for recognizing the ecological, philosophical, and economic value of wilderness preservation.

Senator Tester represents his constituency whom surveys show that over 75% of all Montanans support the legislation. In that sense, Senator Daines is out of step with the majority of Montanans. 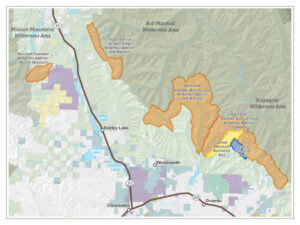 The light tan represents wilderness additions proposed by the BCSA.

To release any additional lands for development as advocated by Senator Daines ignores the fact that out of 94,105,600 acres, only 3,501,410 acres are federally protected as wilderness. The rest of the federal and private lands are open to resource extraction. When opponents and so-called supporters of wilderness designation argue for compromise, they are ignoring this fact.

This brings me to my criticism of the advocates of the Blackfeet Clearwater Stewardship legislation. There is no doubt that the 80,000 acres of additional wilderness will benefit grizzly bears, bull trout, and other wildlife suffering from resource extraction impacts.

However, advocates misrepresent the legislation by ignoring the increase in logging that the BCSA would permit in the Blackfoot drainage. Indeed, the legislation mandates ten years of logging with limited public oversite.

Advocates of the legislation do not seem to mind that the Pyramid Lumber Company in Seeley Lake is receiving and will continue to receive substantial public subsidies in the form of taxpayer-supported logging contracts and will have extraordinary influence over public lands management.

Why should any individual company benefit directly from legislation? It’s a wonder that many of the liberal advocates of this legislation aren’t outraged by the apparent corruption and abuse of public funding.

Most of these logging sales will be accomplished by “Categorical Exclusion,” limiting public environmental review.

The BCSA, we are told, will protect the “cold, clean water” of the Blackfoot River. Nothing could be further from the truth. The legislation mandate for more logging of many Blackfoot River tributaries that will harm aquatic ecosystems. For instance, approximately half of the Monture Creek roadless area, a critical spawning area for bull trout, will be opened to additional logging.

Logging roads are among the most persistent sources of sedimentation that negatively impact aquatic ecosystems. Yes, the headwater tributaries in the proposed wilderness will preserve water quality, but logging and roading will be increased outside of these areas.

Advocates of the BCSA have told me with a straight face, one of the benefits of this proposal is that funds will be available to close logging roads, and remove culverts. Meanwhile, the legislation provides for more subsidized logging.  We don’t need more logging to fix culverts and close roads. This is the behavior of enablers of drugs addicts and alcoholics.

Logging and wood processing releases a tremendous amount of carbon. This greenhouse gas release will contribute to climate warming, which, in turn, will increase the summer temperatures of the main Blackfoot River and negatively impact the aquatic ecosystem.

Many advocates emphasize that this legislation is a “made in Montana” proposal. I find it particularly disingenuous that so-called “wilderness” groups use parochial interests as a justification for supporting this legislation. As one opinion piece opined:  “The BCSA is the culmination of a 15-year collaborative effort by the Blackfoot Clearwater Stewardship Project, a group in Seeley Lake, Ovando, and other nearby communities who represent a broad spectrum of interests, including timber, ranching, outfitting, local business, conservation, recreation and more.”

Lest we forget, these are NATIONAL forest lands that belong to all Americans, not just residents near Seeley Lake or Montana.

I do not want to make light of the proposed additions to the Bob Marshall and Lincoln Scapegoat Wilderness areas. These lands are essential additions to the greater whole of the ecosystem. However, they are also mostly lands that never could be effectively logged due to steep terrain and other limits. It is easy for timber interests to support wilderness for these lands, especially when they get to log the better, more productive lower elevation forests.

In the past, wilderness advocates were unwilling to compromise with logging interests to degrade our public lands. While groups like the Montana Wilderness Association (now Wild Montana since they don’t advocate for wilderness anymore) laud Cecil Garland, who promoted protection for the Lincoln Scapegoat Wilderness, they never mention that Garland refused a compromise proposal to protect only 40,000 acres of the area in exchange for more logging and roading of the area.

Instead of sitting down with timber interests to hammer out a “compromise” as today’s timid wilderness “advocates” do, Garland held his ground. He did something that modern-day wilderness groups fail to do—he started a significant wilderness advocacy campaign, going to communities to lobby for wilderness protection.

Too bad wilderness advocates of today spend the majority of their time in collaboratives like the Southwest Crown of the Continent, where the starting assumption is there will be logging and other resource use. Instead of lamenting the loss of ecosystem integrity due to logging, most of these advocates promote the idea that they “sit down and have a beer” with timber interests as if that is a measure of success. We need more bold legislation like the Northern Rockies Ecosystem Protection Act.

My measure of success is how much additional ecological damage do you preclude, and unfortunately, this no longer seems to be of value to today’s “wilderness” organizations.