There are daily news stories about the recent large wildfires in 2020. In nearly all of these media accounts, almost always attributed to a lack of active forest management. In other words, proponents of logging/thinning forests assert fuel reductions would diminish fire severity. The prevailing assumption is that fuels are the major cause of large blazes.

This chainsaw prescription is all a scam to promote logging. 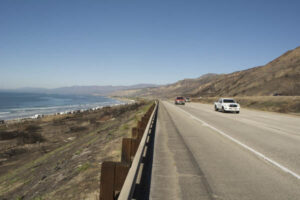 A multi-lane highway did nothing to prevent the spread of the wind-driven Thomas Fire. Only the Pacific Ocean stopped the blaze. Photo George Wuerthner.

I have to wonder how many large high-severity fires these proponents have visited. I’ve visited dozens from Alaska to New Mexico, Montana to California to understand how they burned and what may or may not have influence fire spread.

There is a common denominator in all the large blazes—wind. Chainsaw medicine does nothing about wind. The wind blows embers miles ahead of the fire front, starting new spot fires and crossing any barriers erected to thwart fire spread.

I have observed what some research has documented: under extreme fire weather conditions of drought, low humidity, high temperatures, and wind, nothing stops a fire.

I have seen where wind-driven fires have burned through clearcuts, thinned forests, prescribed burns, and even closely cropped grasslands. In some instances, I’ve ever seen where the wind has toss embers high enough to cross major highways and parking lots to burn down structures, including Safeways and other large box stores. 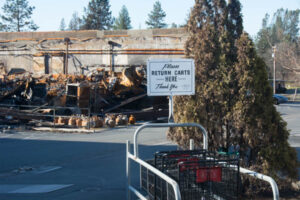 Safeway store in Paradise California that burned to the ground after winds blew embers over the parking lot to ignite the store. Photo George Wuerthner.

Keep in mind that even the mile and half wide Columbia River could not stop the 2018 Eagle Creek Fire, which jumped across the river from Oregon to start fires on the Washington side of the river. If a mile and half wide river with absolutely no fuel cannot halt a fire, does anyone seriously believe that taking out some trees stops fires?

In every fire I’ve visited or observed, what finally leads to the “control” of the blazes is a change in weather—the wind drops, the temperatures drop, or the humidity goes up. What stopped the 1988 Yellowstone Fires was snow on September 11. 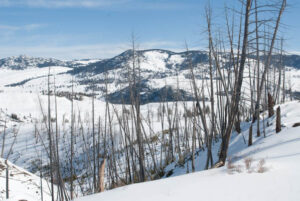 Only snow on September 11th put out the 1988 Yellowstone Fires. Photo George Wuerthner

Proponents of logging can point to a few instances where thinning and other active management may have “appeared” to slow or halt ablaze. But in most cases, a close analysis of the fire weather would show that the extreme fire weather conditions moderated.

A few exceptions do not invalidate the generalization—climate/weather drives all large blazes, not fuels. 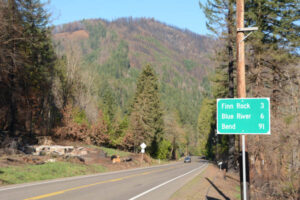 The Holiday Farm Fire driven by 75 mph winds blew through old-growth forests on the western slope of the Oregon Cascades. Photo George Wuerthner.

It is not just my opinion. Various researchers have concluded much the same.

More than 200 preeminent scientists signed a letter to Congress finding that proposed solutions to wildfire like thinning forests are ineffective and short-lived. [i]

To quote from the scientists’ letter: “Thinning is most often proposed to reduce fire risk and lower fire intensity…However, as the climate changes, most of our fires will occur during extreme fire-weather (high winds and temperatures, low humidity, low vegetation moisture). These fires, like the ones burning in the West this summer, will affect large landscapes, regardless of thinning, and, in some cases, burn hundreds or thousands of acres in just a few days.”

For instance, one review study which looked at hundreds of fires concluded: “The effectiveness of this approach at broad scales is limited. Mechanical fuels treatments on U.S. federal lands over the last 15 y (2001–2015) totaled almost 7 million ha  but the annual area burned has continued to set records. Regionally, the area treated has little relationship to trends in the area burned, which is influenced primarily by patterns of drought and warming.”[ii]

The non-partisan Congressional Research Service, in a review of thinning and fuel reduction effectiveness, came to the very same findings:  “ From a quantitative perspective, the CRS study indicates a very weak relationship between acres logged and the extent and severity of forest fires. … the data indicate that fewer acres burned in areas where logging activity was limited.” [iv]

That same finding was reached by another review of 1500 blazes in pine and mixed conifer forests. They discovered that the places with the most significant fuels like parks and wilderness had the least severe burns. “We found forests with higher levels of protection had lower severity values even though they are generally identified as having the highest overall levels of biomass and fuel.”[v]

Even if fuel reductions were adequate, the probability that any fire will engage a reduction in the time when it might be useful is minuscule. As Rhodes and Baker found: “When the probability of fire occurring in a particular area is relatively low, the odds of a fuel treatment influencing the behaviour of a wildfire there, within the time frame that treatments are effective, is also low.”[vi]

Plus, thinning and prescribed burning opens up the forest canopy allowing more light, and reduced competition for water and other nutrients results in rapid regrowth of shrubs and grasses—the fine fuels that burn in a blaze. As Laverty and Hartzell reported: “the National Research Council found that logging and clearcutting can cause rapid regeneration of shrubs and trees that can create highly flammable fuel conditions within a few years of cutting. Without adequate treatment of small woody material, logging may exacerbate fire risk rather than lower it.”[vii]

Another counterintuitive finding is that forests that had presumably missed fires due to fire suppression or other factors burned at lower fire severity. Van Wagtendonk looking at Yosemite’s fire patterns, reported: The most long-unburned, fire-suppressed forests—those that had missed 4 or more fire return intervals (in most cases, areas that had not burned since at least 1930)—had only about 10% high-severity fire.[viii]

What all of this demonstrates is that the idea that more active management will preclude large blazes is a scam. It is treating the symptom instead of the problem.

Climate change is the dominant factor in large fires. Since the 1970s, the climate has warmed considerably, and other fire weather factors such as severe drought and high winds have increased.

These findings suggest that the only solution to large fires isn’t more thinning or logging but rather more investment and political might to reduce climate change. Only by reversing the accumulation of CO2 in the atmosphere can we hope to reduce fire severity and acreage burned.

[vii] Lyle Laverty, USDA Forest Service and Tim Hartzell U.S. Department of the Interior. “A Report to the President in Response to the Wildfires of 2000”, September 8, 2000.