Degrading Forest Ecosystems in the Name of Collaboration A recent article in the Blue Mountain Eagle Finding Common Ground on Active Forest Management quotes several people about restoring forest health.  None of these people have expertise in forest ecology, except James Johnson from the OSU forestry school. The irony is that all these people, including Johnson, ignore the science from other scientists in order to promote logging the Malheur National Forest.

The first problem there is no scientific agreement on the past fire history of the Malheur Forests. Yes, some of the ponderosa pine forests likely burned frequently (10-20 years), but other studies suggest many forests, particularly at higher elevations in eastern Oregon burned at longer intervals and often at mixed to high severity.

The idea that “fire suppression” has led to substantial changes in forest density and conditions is overrated. It ignores the fact that the middle of the last century (1940-1980s) was moister and cooler than in the past. This significantly reduced ignitions and fire spread. Nature was good at suppressing fires.

Second, the goal of “active” management is to remove the natural factors that shape forest ecosystems, including bark beetles, wildfire, drought, and other factors to “restore” the forest to some pre-existing conditions shaped by the historical conditions at that time.

The problem is that we no longer have the same conditions. Climate change is a new influence on the forests of the West. Which trees have the right genetic makeup to survive, say drought or fight off bark beetles or even to survive fires, is unknown. I challenge any of the collaborative members to walk through the forest with me and tell me which trees have the requisite genetics to survive, say bark beetles or drought.

Furthermore, the idea that logging can “restore” forests is absurd. Forests are restored by the natural processes mentioned above, including beetles, fires, etc., since they respond to the current climatic conditions and select the trees that best adapted to the current conditions.

Part of the premise for logging is the idea that dead trees are somehow undesirable. In reality there are many species that live in mortal fear of green forests. 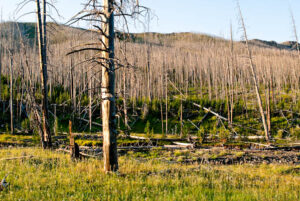 Native bees increase in recent high severity burns. And 45% of the bird species in the Northern Rockies forests (which includes the Blue Mountains) rely on dead trees for foraging, nesting, and roosting. Dead trees in streams provide the bulk of habitat for aquatic species. And roads created for logging constitute a significant source of sedimentation in streams and disturb and displace species like elk.

Large trees (over 21 inches) store the bulk of carbon in forests. Even dead trees store huge amounts of carbon. Logging releases carbon which is why active forest management is the most significant contributor to greenhouse gas emissions in Oregon.