The Idaho side of the Tetons, much of it in the Jedediah Smith Wilderness or proposed additions. Photo by George Wuerthner

The Caribou-Targhee National Forest plan to implement prescribed burns on 1.7 million acres along the Tetons’ west slope deserves a response.

As reported in the Jackson Hole Guide, the “problem,” according to Fire Management Officer Michael Johnston, is that the northern reaches of the Caribou-Targhee are dominated by mature, decadent stands of timber now poised for massive and potentially catastrophic wildfires. The answer, he said, is using controlled burns to replicate wildfire’s natural role and curb the hazard to nearby communities.

There are all kinds of factual inaccuracies in that statement and pejorative language indicative of an agency that sees Nature as a problem.

First, terms like “mature”, “decadent” and “catastrophic” represent “old” ideas about forests. Older forests are the “natural” consequence of the forest ecology of the region’s trees.  “Catastrophic” is a term that foresters use all the time to describe natural ecological forces like wildfire because they cannot conceive of trees dying from anything but a chainsaw as natural.

In general, lodgepole pine and subalpine fir dominate the Teton forest ecosystem after some major natural disturbance events like a massive wildfire or major insect outbreak. They then grow for hundreds of years until the next reset occurs. 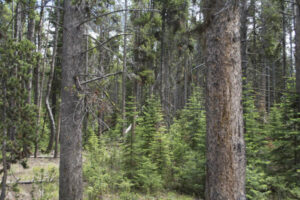 In fact, contrary to the implied message from the Fire Management Officer, bark beetle outbreaks REDUCE the likelihood of a large high severity crown fire. In research done  right in the Greater Yellowstone Ecosystem, Simard, et al. concluded: “… results suggested that undisturbed, red, and gray-stage stands were unlikely to exhibit transition of surface fires to tree crowns (torching), and that the likelihood of sustaining an active crown fire (crowning) decreased from undisturbed to gray-stage stands.”

In reality, under extreme fire weather conditions, green trees are more susceptible to ignition than dead trees due to the flammable resins in needles and cones. 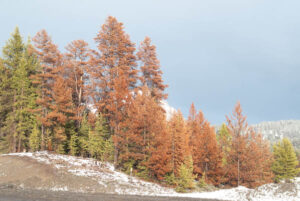 Once the needles fall off bark beetle-killed trees, they are actually less likely to burn than a green forest. Photo by George Wuerthner.

Climate/weather control large natural forest shaping events like wildfire and beetles. During drought years, forests are more susceptible to bark beetles, wildfire, and even just drought mortality. This mortality is the natural order of events, just as an elk herd might face a population decline after a winter of deep snow.

While small fires occur continuously in the region’s forest, they do not amount to a hill of beans in their ecological influence. It is only the larger natural events that are important. The idea that “prescribed burning” mimic “natural” conditions is a farse.

The entire plan’s problem is that no one, not even the fire management officer for the Caribou-Targhee NF, can say where a fire will occur. Thus, the probability that a fire will encounter a recently treated area is minuscule, especially since natural fires in this region are so infrequent-often hundreds of years between ignitions. 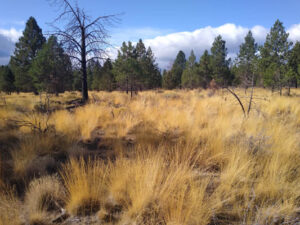 This area Oregon was both thinned and burned two years ago.  Although a different ecosystem the same principles apply. The regrowth of fine fuels like grass has made this site more fire-prone than it was prior to burning. Photo by George Wuerthner.

Beyond these factors, prescribed burning nor thinning does not preclude the larger blazes or insect events. Years of research around the West demonstrates that when extreme climate/weather conditions (drought, warm temps, low humidity, and most importantly wind) occur with an ignition, fires sweep across vast acreages, including all forest treatments like prescribed burns or thinning.

To quote from a paper written by fire scientists at the Forest Service Missoula Fire Lab, “Extreme environmental conditions . .overwhelmed most fuel treatment effects. . . This included almost all treatment methods, including prescribed burning and thinning. . .. Suppression efforts had little benefit from fuel modifications.”

Most of these forests do not burn well except under extreme fire conditions. As one fire scientist at the Missoula Fire Lab once told me, the Greater Yellowstone Ecosystem woodlands are “asbestos” forests because they are difficult to burn as they remain too moist and cool during most fire seasons. “You probably need a flame thrower to get them to burn in most years,” he told me. 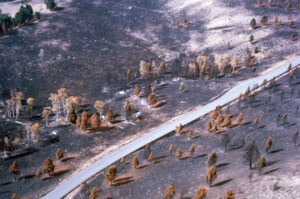 Ariel photo of a road in Yellowstone after the 1988 fires. Note how even the widely spread trees in the savanna-like forest  burned, while the road which had no fuel did not halt the fire spread. When you have high winds, with drought, high temps, and low humidity nothing stops large blazes. And neither will prescribe burning. Photo by George Wuerthner.

And even if the FS were able to execute such a plan, do residents want to see and breathe smoke year after year? Because prescribed burns occur when fuels are moister (to prevent them from escaping into massive wildfires), they tend to give off more moisture (i.e., smoke).

Bark beetles, wildfire, and other natural mortality events are the ecological processes that maintain healthy forest ecosystems. We do not need “domesticated” forests in our wildlands.

Much of the acreage proposed for manipulation and prescribed burning are roadless and proposed additions to the Jedediah Smith Wilderness. 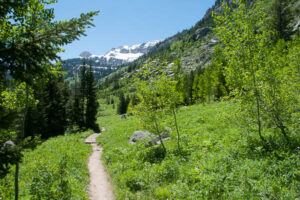 South Fork of Teton Creek in Jedediah Smith Wilderness that lies on the western flank of the Tetons. Photo by George Wuerthner.

To protect houses and communities, start at the home and work outwards The only treatment that has proven effective is to build fire resistance structures.

Comments on plans for the Targhee part of the forest are being accepted through Dec. 30. A comment deadline on the Caribou portion has lapsed. Email comments to comments-intermtn-caribou-targhee@usda.gov