With the publication of “Undaunted: My Fight Against America’s Enemies at Home and Abroad,” John O. Brennan, former director of the Central Intelligence Agency, has joined an exclusive list of CIA directors and deputy directors who have misled the U.S. Congress and the American people.  This list includes Richard Helms, William Casey, Robert Gates, George Tenet, John McLaughlin, and Michael Morell.  The examples of Gates and Brennan are particularly egregious because they were career intelligence officers from the directorate of intelligence that prided itself on “telling truth to power.”

Bob Gates refused to tell “truth to power” regarding Iran-contra and, as a result, he had to withdraw his nomination as CIA director in 1986.  Gates did so after the chairman of the Senate intelligence committee, David Boren (D-OK), alerted him that the committee believed he had lied about Iran-contra and therefore would not be recommended for confirmation.  Similarly, John Brennan had to turn down President Barack Obama’s preference for naming Brennan as CIA director, since Brennan’s acquiescence with the sadistic policy of torture and abuse and the cover-up of the shoot down of a missionary plane in Peru would create confirmation problems.  Interestingly, both Gates and Brennan managed to rehabilitate their credentials over a four-year period, and withstood significant opposition to be confirmed to lead CIA the second time around.

Brennan claims to have written a “brutally honest memoir” and stresses the importance of integrity, which is why the shadings and outright deceits of his story are particularly troublesome.  Brennan maintains that he was not in the chain of command for decisions to conduct extraordinary renditions and torture and abuse, but he was chief of staff and deputy executive director under CIA director Tenet when these decisions were made.  In his memoir, Brennan states that he decided against a career in clandestine operations because he thoroughly opposed tactics of “intimidation, bullying, and threats of physical violence” in coercing “individuals to cooperate with us.”  Years later, however, he expressed no opposition to tactics of waterboarding and actual physical violence as well as the renditions policy that sent suspects to Arab intelligence services that conducted their own sadistic practices.  These policies were violations of U.S. law, international law, and the U.S. Constitution.

When the Senate intelligence committee conducted an investigation of these unconscionable practices, it was CIA director Brennan who told the committee’s chairwoman, Dianne Feinstein (D-CA), that it was “beyond the 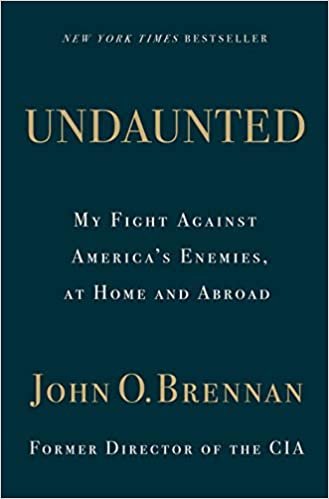 scope of reason” to think the CIA would block the Senate investigation and hack into the committee’s computers.  We learned later that Brennan not only knew about the obstruction of the investigation, a violation of the separation of powers, but had ordered a CIA lawyer to conduct the search.  It took then Vice President Joe Biden to coax an apology from Brennan to Feinstein for the damage he caused to CIA’s relations with the Senate intelligence committee.

In his memoir, Brennan sees the Senate’s investigation as a “congressional hunting expedition,” and describes the report itself as “tortured.”  He fails to deal with the important findings of the report that document the practices of torture and abuse that started before the Department of Justice memoranda sanctioned certain practices, and the fact that CIA interrogators went far beyond what department lawyers determined to be acceptable.  Brennan obviously has no understanding or appreciation for the international rejection of the Nuremberg defense that deems no guilt for committing illegal actions ordered by a superior officer or official.

In fact, Brennan fashions his own Nuremberg defense, arguing that the CIA didn’t decide on its own to conduct the unconscionable covert-action program known as “Rendition, Detention, and Interrogation (RDI).”  Brennan absolves himself of any guilt by arguing that all CIA covert-action programs are authorized by a formal written document signed by the president.  He emphasizes that the waterboarding of Abu Zubaydah, wrongly believed to have greater influence within al-Qaeda than was the case, was carried out under the authority of President George W. Bush and the Department of Justice.  He audaciously credits CIA officers and medical personnel with making sure Zubaydah didn’t drown.  Brennan doesn’t mention that Zubaydah was waterboarded numerous times, which not even the worst DoJ lawyers such as John Yoo and Jay Bybee favored. And he doesn’t mention that the CIA had to hire contractors to conduct much of this activity because so many CIA medical personnel and clandestine officers refused to participate.

CIA director Gina Haspel ran the prison where Zubaydah was tortured “24 hours a day, for 17 straight days” in August 2002.  Brennan and other CIA directors reject the word “torture,” but the following is from the Senate intelligence committee’s declassified summary:

“From August 4, 2002, through August 23, 2002, the CIA subjected Zubaydah to its enhanced interrogation techniques on a near 24-hour-per-day basis.  After Zubaydah had been in complete isolation for 47 days, the most aggressive interrogation phase began….  Security personnel entered the cell, shackled and hooded Zubaydah, and removed his towel.  (Zubaydah was then naked.)  The interrogators placed a rolled towel around his neck as a collar, and backed him up to the cell wall (an interrogator acknowledged the collar was used to slam Zubaydah against a concrete wall).  After six days of interrogation, the CIA team informed headquarters that they believed it was unlikely Zubaydah “had actionable new information about current threats to the United States.”

Nevertheless, the torture and abuse continued for two more weeks.

When Brennan learned some of these details, he expressed shock on a stairwell at CIA headquarters to a clandestine operations officer.  A shocked Brennan went no further.

Brennan barely mentions the important role of the CIA’s Inspector General in investigating the malfeasance associated with the CIA’s drug interdiction program in South America; the RDI covert-action program; or the 9/11 intelligence failure.  His only mention of the Office of the Inspector General is to criticize the IG’s excellent study of the RDI program, which actually ended the Enhanced Interrogation Techniques (read torture and abuse) and was essential to the preparation of the Senate intelligence committee’s authoritative account.  The Senate study runs more than 6,000 pages, but has been deep-sixed in the intelligence bureaucracy by the Republican leaders of the Senate.

President Obama could have and should have made sure that a copy of the report was archived with the National Archives, but he chose not to do so.  Similarly, he chose not to pursue any accountability for those CIA officers at the highest levels who orchestrated the torture program.  Obama also made sure that for too many years of his presidency the CIA didn’t have an Inspector General.  Neither Brennan nor Leon Panetta, his predecessor, wanted to deal with the scrupulous oversight of an aggressive Inspector General.

With his disingenuous memoir, Brennan has now joined forces with former CIA directors and deputy directors such as Tenet, McLaughlin, Goss, and Michael Morell who refuse to recognize the CIA created a sadistic program that went far beyond DoJ guidelines, and then lied about the extent of the torture and the fact that nothing was learned that stopped terrorist activity.  The FBI strongly argued against torture and maintained that intelligence could have been obtained through other means.  Brennan and the others lamely contend that the answer to that question “is and will forever remain unknowable.”

Brennan ordered the hacking of the committee’s computers because the so-called Panetta Review had comprehensive and authoritative evidence of the unconscionable acts of CIA officers.  Brennan claims the agency was simply trying to retrieve materials that the committee shouldn’t have seen because the reports “were created after the RDI program had ended and after the time frame identified” in the Senate intelligence committee’s document request. A simple matter of time frame could never explain Brennan’s urgency and risk-taking.

Brennan and Jose Rodriguez, the director of CIA’s Counterterrorism Center, were actually engaged in the obstruction of justice in view of various legal actions that had been taken to acquire evidence of torture and abuse.  Rodriguez accepted the considerable risk of destroying the torture tapes because he felt there was greater risk in allowing them to be seen.  Brennan knew that he and others couldn’t deny CIA’s sadistic actions if the Panetta Review was circulated.

Curiously, Brennan is extremely critical of CIA director Haspel for failing to invite him to the agency’s annual Christmas party, but nowhere mentions her role in favoring the policy of torture and abuse; running the worst of the secret prisons that conducted torture and abuse; and sending the cable that ordered agency officers to destroy the infamous torture tapes, which constituted obstruction of justice.  As for other CIA directors and deputy directors, he has praise for one and all, even director Porter Goss, who openly called for politicization of intelligence, George Tenet, who uttered the infamous two words (“slam dunk”) that were the predicate to politicized intelligence, and John McLaughlin (who provided the “slam dunk” briefing to the White House and orchestrated the phony speech that Secretary of State Colin Powell delivered to the United Nations to justify the Iraq war).  Brennan considers himself a patriot; presumably they were all patriots by his lights.

Various CIA officials, including Haspel and Rodriguez, maintained that the 92 torture tapes that recorded the sadistic acts had to be destroyed to protect the identify of the torturers. The torturers were hooded, however; Haspel and the others lied about that.  Even the torturers in Hollywood’s Zero Dark Thirty, which defended the acts, were hooded.  There has never been a time in modern history when torturers weren’t hooded.  John Brennan’s metaphoric hood on the CIA’s war crimes is one of the worst examples of the agency’s continued cover-up of torture and abuse.