Federal Prisons Should Not be Death Chambers 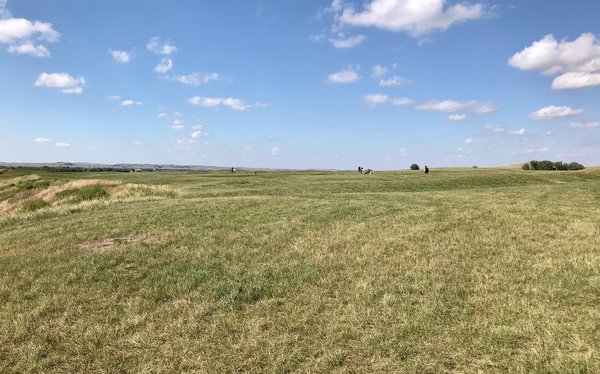 Double Ditch Indian Village overlooks the Missouri River in North Dakota, about an hour’s drive north from where the Dakota Access Pipeline Water Protectors formed their prayer camps in 2016 on the Standing Rock Sioux Reservation. It’s a historic site of a village where, from 1490 to 1785, members of the Mandan Tribe lived in earth mound dwellings that protected them from extreme temperatures and near-constant winds.

The Mandan flourished for almost three centuries—longer than the United States has been in existence. But in 1782, the smallpox scourge arrived on their homelands, leaving survivors to scatter for safety.

Representative Ruth Buffalo, Democrat of Fargo and an enrolled member of the Mandan, Hidatsa, and Arikara Nation, carries in her consciousness the trauma of the decimation of the Mandan people by that pandemic. She is advocating for the release and protection of the 3,898 Native Americans currently incarcerated under the aegis of the Federal Bureau of Prisons (BOP).

“Native people are incarcerated in federal prisons at a rate 38 percent higher than the national average,” Buffalo stated in a press release. “Unless the BOP develops a comprehensive Exposure Control Plan and enacts it immediately, this pandemic could be devastating to our Native population.”

She’s joined by Loved Ones of Indigenous Federal Prisoners, a newly formed ad hoc group that began sounding the alarm even before COVID-19 claimed the life of federal prison inmate Andrea Circle Bear, a member of the Cheyenne River Sioux Tribe in Eagle Butte, South Dakota. Circle Bear—the first woman federal prisoner to die of COVID-19—passed away on April 28, three weeks after giving birth at a hospital in Fort Worth, Texas, via an emergency C-section while hooked up to a ventilator. She was serving a twenty-six month sentence for “maintaining a drug involved premises,” and was more than eight months pregnant when her prison term began. In a recent op-ed in The Washington Post, her grandmother, Clara LeBeau explained that her transfer had been pointless and her death senseless:

“Because she’d had five C-sections, the BOP knew Circle Bear needed medical care; that seems to be why she was sent to Carswell, the only medical facility for women in the federal system—though nobody ever told us the reason, and the BOP didn’t send her until March 20. But the way things ended up, she wasn’t treated at Carswell, the baby wasn’t born there, Andrea didn’t die there—all that happened at the local hospital.”

The small but growing number of “Loved Ones” in North Dakota and Colorado is petitioning Congress to intervene. The group is an outgrowth of the effort launched by the Bismarck-Mandan Unitarian Universalist Church to support NoDAPL Water Protectors, two of whom are still incarcerated.

The Reverend Karen Van Fossan, now a minister in Fargo, told The Progressivethat she expanded the effort she had helped start to include all Native inmates because their own people were telling them the BOP and Centers for Disease Control and Prevention guidelines were not being adhered to.

In an email from “Rattler” (Michael Markus, Oglala Lakota from Pine Ridge) sent from FCI Sandstone Prison in Minnesota on May 14 and provided to The Progressive, the NoDAPL political prisoner described the conditions under lockdown:

On May 15, Loved Ones launched a public awareness campaign reminding people that the majority of federal inmates (55 percent) were convicted of drug or immigration-related offenses, of which the overwhelming majority were nonviolent (92 percent).

While there’s a mechanism in place for expanded home release for federal prisoners under the CARES Act, in a May 11 letter to Congressional leadership the Federal Defenders contend that the Department of Justice (DOJ) and BOP “have made little use of these authorities to reduce prison populations and enable social distancing. Nor have they developed a coherent strategy to protect those in their care or employ.”

“The idea of the concentration camp, a place where people are concentrated, a place with rampant disease—and we know they get sick and die from lack of medical treatment—that started in our society with Native Americans in the 1800s,” Freeman tells The Progressive. “Bioterrorism was the reality in the United States for Native people from jump, and it’s ongoing. With that as the backdrop, not a single institution is prepared for what is happening right now.”

Losing thirty-year-old Circle Bear to COVID-19 while under BOP supervision last month was an avoidable tragedy. And, while authorities continue to ignore the plight of inmates, fatalities are rapidly mounting as the situation deteriorates throughout the federal prison system.

I requested an interview with U.S. Attorney Ron Parsons, who was responsible for prosecuting Civil Bear for a nonviolent drug offense. He was quoted in the DOJ’s press release after sentencing: “Don’t let yourself or your property get mixed up in the world of illegal drugs. It ends badly.”

Our request was directed to BOP spokesman Justin Long, who told The Progressive that Circle Bear was airlifted to the Texas prison from South Dakota on March 20, quarantined upon arrival, and fell ill after the quarantine.

He wrote: “Her medical care precluded her consideration for home confinement, which given her very recent arrival, was unlikely to have been granted.”

“For them to continue to say that everything is basically fine, when we hear from families that it is not, and when what we see is a death count ticking up,” Freeman says, “the house of cards is revealing itself.”

South Dakota Civil Rights attorney Bruce Ellison views Circle Bear as “a victim of  mass incarceration.” Her exposure to COVID-19, he adds, should be seen in the context of the “historical continuation of the denial of the Eighth Amendment constitutional right to proper medical care faced by Native and other women and men in South Dakota prisons.”

“Nonviolent offenders need treatment, not prison during this pandemic,” he wrote in an email.

Buffalo said she hopes tribal governments will ask BOP for a roll-call or a wellness check on their tribal members, but she doesn’t fault them for not getting to it yet.

“This is not to take a stab at tribal government in any way, shape, or form,” says Buffalo, noting heroic efforts like that of Cheyenne River Sioux Tribe Chairman Harold Frazier to set up COVID-19 checkpoints on roads leading to reservation lands. “It’s a testament to how much we operate in a crisis mode; they’re busy trying to protect what’s in front of them,” she adds.

Olive Bias, a NoDAPL Water Protector who is now working for Freeman as a criminal defense/movement paralegal, told me that Loved Ones is keeping a close eye on the BOP’s dealings, like an April 7 report that the agency had purchased $60,000 worth of hydroxychloroquine.

“My loved ones [who are] doing time and other inmates we struggle alongside are not expendable,” Bias says. “We cannot be considered collateral damage to a pandemic so prisons can continue to violate people’s rights behind closed doors.”

As Buffalo puts it, “We’re hoping to find justice again on another level for our incarcerated relatives. The prison sentence should not be a death sentence. We can’t leave them behind.”