The Relative Generosity of the Economic Rescue Package: Boeing vs. Public Broadcasting

The media have been engaged big time in the numbers without context game, throwing out really big numbers faster than anyone can catch them. (For the biggest, the overall size of the stimulus, given the time frame, we are looking at a stimulus that is about five times as large as the Obama stimulus.) While there are many great comparisons to be made on who got what, for tonight I just want to focus on one, the handout to Boeing compared with the money provided to the Corporation for Public Broadcasting.

As most people know, Boeing was already in trouble for reasons having nothing to do with the coronavirus. Safety problems with its new 737 Max led to two deadly crashes. Apparently the problems stem from very basic features of the plane which cannot be easily fixed. These problems have whacked Boeing’s profits and stock price and forced it to send its CEO packing, although he did get a $62 million going away present.

Anyhow, being the empathetic crew they are, Trump and the Republicans rushed to set aside a nice chunk of taxpayer dollars for Boeing in their big corporate slush fund. Boeing is slated to get $17 billion in loans to help get it through the crisis.

It is not easy to know what the current market rate would be, given the extraordinary credit situation, but let’s say this gap is 5.0 percentage points. If we assume the loans are out for a year (it could be considerably longer), then we would effectively be handing Boeing $850 million (5.0 percent of $17 billion).

In an economic crisis, there are lots of businesses and individuals who would love to be able to borrow at the discount rate the government is providing to its favored recipients. As the lowest cost borrower, the government could always make money by lending to businesses at an interest rate between what the market would charge them and what the government pays. Yet, no one in their right mind would suggest that the government have an open-ended facility for this purpose, even though it would be hugely profitable by the bailout apologists’ standards.

Giving subsidized loans, even though they earn the government interest, is a huge subsidy. And, if we did an infinite amount of such loans we would have a serious problem with inflation, just the same as if the government were to hand everyone $100,000 a year. Serious people understand this fact, even if they choose not to be honest about it.

Anyhow, for our big comparison, we will look at the $850 million gift to Boeing and the $75 million in the package that was designated for the Corporation for Public Broadcasting  (CPB). CPB gives money to a wide range of public broadcasters including the Public Broadcasting Service and National Public Radio.

To put this in a context that might be meaningful to people, we will use the metric of a “food stamp person year.” The average food stamp beneficiary in 2018 received $127 per month, which translates in $1,560 a year. To account for inflation, I rounded up to $1,600 per person per year. 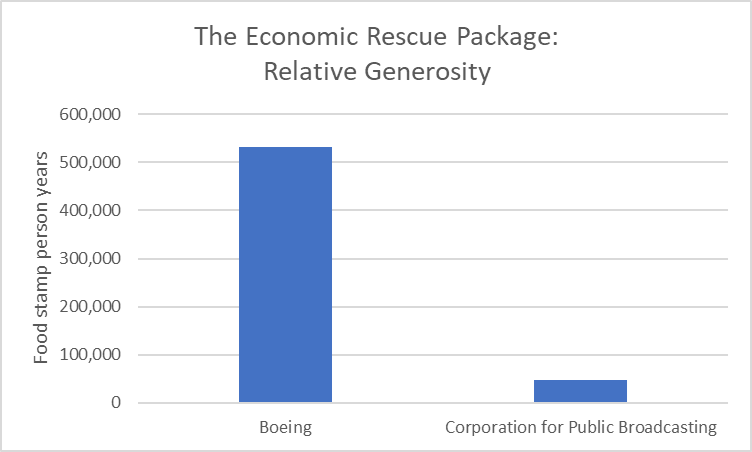 While some people are undoubtedly upset by the CPB getting $75 million, Boeing is getting more than ten times as much money from the rescue package. Some of this money will likely help to keep its workers employed, but much of this will go to the 8-digit paycheck of Boeing’s new CEO and keeping its shareholders happy.

Anyhow, people can have different opinions on the merits of these items, but they should at least have a clear idea of their relative size.