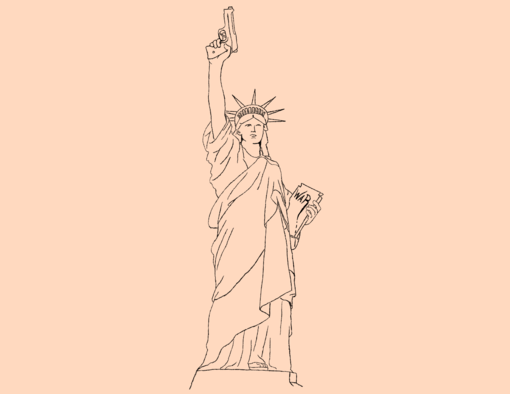 With most media attention in the US on the government shutdown and border wall stand-off spectacle, the Trump administration has been quietly ramping up US militarism around the world. And it has set its sights on Venezuela, once again, by supporting a coup. Whether or not one supports the policies of Maduro or any other leader is inconsequential in this regard because, despite the empty mythos, the American Empire has never been interested in defending democracy. After all, its list of allies include fascist strongholds, a murderous medieval kingdom, a ruthless apartheid regime and several compliant, neoliberal states.

The ruling class of the US imperium will simply not tolerate any government that opposes its financial and geopolitical dominance, attempts socialism, or transfers its nexus to another powerful state entity, like Russia or China for instance. If one chooses to do so it is instantly targeted for assault either by crippling economic sanctions or embargoes, which make governance nearly impossible and primarily harms the general population, or covert subversion, or by direct and indirect military intervention. And the corporate media, when it chooses to cover these issues, generally parrots State Department and Pentagon talking points and obfuscations about the intentions of the US government, the role of corporations and global capitalism, and the character of the governments the US happens to be opposing at the time. And all of this is done with virtually no historical analysis. But of course none of this is new.

Whether it was for Reagan in Grenada or Bush Sr. in Panama or Kuwait, or Clinton in the Balkans, the American mainstream media has dutifully peddled the lies of Washington. The media cycle was drenched in the lies of the Bush administration about “weapons of mass destruction” in Iraq. Despite Iraq having absolutely nothing to do with the attacks on 9/11, the corporate media did little to underscore this fact at a time when the Empire was ratcheting up the war machine. Those who questioned it often lost their jobs or were marginalized. Now that this foray resulted in the slaughter of hundreds of thousands of civilians, mass migration, and the decimation of an entire region many in the media and some politicians have looked back with selective remorse. As if that helps the dead in any way.

The corporate media came to the aid of the Obama administration when it targeted Libya, repeating stories, many unsubstantiated, about atrocities being carried out by the Gaddafi government. When Gaddafi himself was brutally murdered by a mob his death was talked about in the parlance of empire. “We came, we saw, he died,” Hillary Clinton, then Secretary of State, maniacally proclaimed in a television interview. And the media barely lifted an eyebrow of shock. On the contrary, they laughed and applauded it. Now that country, once one of the most prosperous in Africa, has become a haven for slave traders and a focal point for the migration crisis in Europe. But one would be hard pressed to find many big news stories once the US/NATO war machine has finished bombing their intended target. All the monumental failures and brutality of militarism should rationally signal its end, not only in the US but everywhere. The interests of capital, however, drive its continued expansion. And the corporate media has been its ever faithful mouthpiece.

The mendacity of a sycophantic corporate press has allowed for decades of unrestrained plunder and whole scale destruction of entire societies, regions and ecosystems. It speaks in a language sanctified by empire which, of course, cannot mention the word “empire” or “imperialism” at all. It is, after all, a media governed and guided by corporate interests and those interests are tied to some of the most lucrative industries on the planet. Business is booming, in fact, for American and multinational companies that profit from war and militarism, like Northrop Grumman, General Dynamics, Boeing, Lockheed Martin and Raytheon. Other companies, like those in the fossil fuel industry and infrastructure development contracting, wait in the wings for the aftermath of each new exploit like vultures waiting to feed on carrion.

The corporate press understands how sacrosanct the military is to the elite establishment in the US. One can see this in the copious amount of “experts” on cable news that are members or former members of the US military, the CIA and other agencies of empire. No one at the top dare question how much money the military gets, this year it is slated to get at least $716 billion, or call it out as the biggest polluter on the planet and contributor to global warming. The ones who do in the mainstream are swiftly chastised or silenced.

No tears can be shed for America’s so-called “enemies” either. A hospital? A school? A wedding party? An ambulance? None of these garner the same outpouring of sympathy that just one American soldier receives. They know, too, that the culture has been conditioned into obeisance to the war industry. This is the same machine which bamboozles young men and women with scant economic or educational opportunities into “defending US interests” – code words for being cannon fodder, a term buried long ago, or mercenaries for the protection of corporate investments.

Of course militaristic jingoism is nothing new in the US. It has played well for decades at nearly every single sporting event getting slicker with more techno flash every time. With jets tearing the sky into shards over packed stadiums festooned with red, white and blue everything, crowds of disenfranchised youth are encouraged to buy into the lie that bombing impoverished and largely powerless people elsewhere to smithereens will somehow defend their homeland.

High schools and even colleges welcome recruiters often to “career day” events. The organized murder game is often their only option for employment or educational advancement. But should they return home from a deployment damaged, with PTSD or in financial straits they are generally scuttled out of the spotlight. Suicide, domestic abuse, and homelessness are skyrocketing among them, but you would hardly know that if you watch cable news or read most mainstream newspapers. True, they are occasionally trotted out onto podiums by politicians for empty patriotic accolades, but only if they are telegenic and useful for the continuation of the war machine. Should they dissent from the narrative, they are rendered invisible.

Hollywood acts as an arm to this media intoxication when it comes to the military. Watch virtually any action, sci-fi or suspense movie these days and notice how militarism is seamlessly laced through most of the plot lines. Military hardware is easily available for these productions. Soldiers are almost always cast as virtuous. And this also demonstrates the strain of pernicious authoritarianism within American culture. FBI and CIA agents, detectives, prosecutors, all of them are portrayed with an air of troubled, perhaps flawed, but intact unassailable nobility.

And this gets to the covert actions of the American Empire which are obscured or talked about in muddied terms even more. Those actions masterminded in the dark halls of the surveillance state. Whether it be supporting coups, kidnapping dissidents, targeted assassinations, or training and funding death squads, the US has a long history of destabilizing democratically elected governments or infiltrating democratic movements with subterfuge. It did this in the Democratic Republic of the Congo when it murdered its first president, Patrice Lumumba. It did so in Iran when it toppled the government of Mohammad Mosaddegh. It did it in Chile when it aided the coup against Salvador Allende. It did it in Indonesia, and El Salvador, and Honduras and so on. So there should be no doubt that it is doing it again, right now, in Venezuela.

The ones rendered expendable by the American mainstream media, who are seldom if ever spoken of, are the civilian victims of the American Empire’s endless wars, occupations and covert actions. They are ghosts that roam the sphere without glorious tombs in which to repose. No imperial-sanctioned, wreath clad monuments adorn their graves. No days of remembrance. They may have met their end in the killing fields created or fostered by the Empire thanks to a brutality paid for in full by the US taxpayer, but they are not important enough to be mentioned by the American media except maybe in passing. It is as if uttering their names might summon a spirit of vengeance from a mountain of corpses, the sediment of imperialism itself.

Of course other nations around the planet, including Russia and China, use brutal militarism as well to crush dissent. But none of them invests or spends nearly as much as the US in this regard, nor use it to the same extent. And this is what makes American imperialism the most dangerous on the planet. The business of the American Empire, after all, is war, whether it is selling weaponry to its client states who are actively engaged in genocide, occupation or repression, be it Saudi Arabia, India or Israel, or engaging in war games itself throughout Africa and Central Asia. And as the Trump administration lurches toward an even more aggressive foreign policy, and even more sanctions and threats of military actions against Venezuela or Iran or North Korea, we will be seeing a lot of the same sycophantic and ahistorical propaganda being pumped out by virtually every corporate media outlet. While they might loath Trump’s vulgarity and overt racism, they will never oppose his belligerent foreign policy. The enemies of the American Empire will always be vilified accordingly as the enemies of democracy because mendacious doublespeak is the official language of a media inextricably wedded to its corporate masters.