An Early Tableau of the New York Primary

Bernie Sanders is trailing in New York, perhaps into the double digits, but the fundamentals of the electorate and of his campaign strategy provide a reasonable basis for the possibility of an upset win next Tuesday, April 19. I have analyzed New York’s sixty-two counties according to regional divisions in-depth, and will continue to do so as campaign and polling dynamics change over the next eight days.

Upstate New York can reasonably be divided into three areas: Buffalo-Niagara (Western), Central Upstate, and Eastern Upstate. Ever since New Hampshire, the idea that Sanders does well in “states touching Vermont” has become something of a running joke. Not only did Bernie make Hawai’i white, he also turned it into a state bordering Vermont.

Beyond the yuks, the data we do have in New York suggests that in eleven counties bordering or nearly bordering Vermont, votes could go for Sanders as much as 70-30. The population of these counties is over 1.3 million. Sanders is also doing very well in Albany, not far from Vermont, but so is Clinton. Albany is discussed separately below.

I have long used adjustments to FiveThirtyEight’s Facebook Primary to accurately call races such as Michigan’s (90% of the counties called correctly) and Wisconsin’s (virtually 100% correct down to the county level). The purple shock you see running up the Eastern side of Upstate New York in the graphic above  represents counties near Vermont where Sanders was running, on average as of February 29, thirty-five to more than one hundred percent above his usual amount of “likes” on Facebook. Meanwhile, former Secretary of State Hillary Clinton was running anywhere from even with her national average to fifty percent below it in all eleven counties. FiveThirtyEight has suggested that it will finally update this data sometime before New York’s primary.

All the way across Upstate is Erie County (Buffalo), which is a lighter shade of purple surrounded by a sea of orange, representing counties in which Donald Trump is especially strong according to the Facebook Primary. In Erie, Clinton was running 25% above her national average in the Facebook Primary as of February 29 and Sanders was running 39% above his. Given lessons learned to date in Michigan and elsewhere, Sanders’ slight advantage there could still result in a loss given that fourteen percent of the Erie population is African American. Visits from Sanders, as scheduled beginning today, tend to mitigate such losses. Taken together with Niagara, Chautauqua, and the small, odd duck Orleans County, where Sanders was running around 45% worse than surrounding counties for no apparent reason, I am pegging Sanders as reasonably likely to eek out an overall 51-49 win in the Buffalo-Niagara region. The population of these four counties is also around 1.3 million.

Central Upstate is largely orange territory with pockets of Sanders purple, especially in and around large university areas in counties such as Onondaga (Syracuse) and especially Tompkins (Ithaca). With appropriate campaigning as in Wisconsin and Michigan, this region should go for Sanders around 60-40, a figure not too far from the one poll we have so far with a larger regional breakdown. The population in these counties all told is much higher than 1.3 million, but with the amount of vote that will go to Trump or other Republicans, I am projecting an even distribution for Western, Central, and Eastern upstate with 10% of the overall vote each.

Adding in Albany and Putnam (another odd duck county), at a projected five percent victory for Sanders with populations just over four hundred thousand together, yields a total Upstate projection of 33.5% of the overall New York vote. In 2008, Long Island was Barack Obama’s best region in a substantial loss to Clinton. Long Island made up 10% of the Democratic Primary vote in 2008. Long Island looks like Trump county, but, given Facebook Primary data, I am projecting it again at 10% of the vote with a four point advantage for Clinton. Adding everything outside of New York City, Westchester, and Rockland accordingly gives Sanders a 24.7% to 18.8% advantage in the overall vote.

If we consider Bernie Sanders’ showing in Chicagoas his maximum reasonable potential in the New York City region, he could take 45.5% of the remaining 66.5% of the vote for a possible 50.69% to 49.31% upset victory. New York’s primary, however, is closed to people not registered as Democrat. My best projection based on the few previous closed primaries held is that we should assess at least a five percent deduction to Sanders’ overall potential for a 3.6% projected Clinton victory. (This is not my final projection.)

Given that Clinton will very likely do much better in Manhattan than she did in Wrigleyville, Sanders will have to do even better in New York City than he did with Chicago’s Latino and Black voters. I will be saying more about the polling we do have so far over the coming days. For now, it does seem like Sanders could do somewhat betterthan he did with Chicago’s black voters. However, the best polling we have, which isn’t saying much, suggests that he hasn’t yet gained the traction he did in Chicago where he won majority Latina and Latino wards by 12%.

Below: an abridged version of a data set I am using to analyze New York counties by economic, population, ethnicity, and Facebook Primary data. 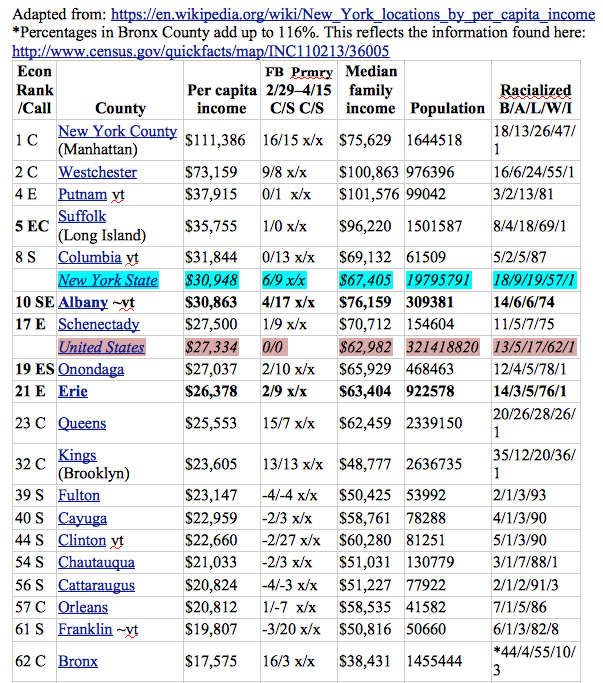