Why Prescribed Burning is Not a Panacea Prescribed burns are perceived to be a panacea for reducing wildfire, but there are many problems with implementation. George Wuerthner.

Many people in New Mexico are calling for an investigation of the practice of prescribed burning in light of the recent immense Calf Canyon and Hermits Peak wildfires that began as prescribed burns.

The combined fires have scorched 312,000 acres as of May 28th and remain out of control. At least 330 homes have been destroyed. Drought and hurricane-force winds are driving these blazes.

Recently, the Forest Service chief Randy Moore has implemented a 90-day moratorium on prescribed burns to examine what may have gone wrong and what could be done better.

The FS is unwilling to say, and politicians and much of the public do not want to hear that climate change is the culprit, not fuels. The warming climate and higher windvelocity are driving large fires. And no amount of “active forest management” will slow wildfires or limit their size.

The goal of prescribed burning is to reduce fuels by setting fires when conditions allow for control of the subsequent blaze. Prescribed burning has been advocated as a panacea to reduce large wildfires across the West. Still, most professional ecologists recognize that burning won’t stop wildfires, though it can reduce fire severity under certain conditions.

It is good that people are beginning to recognize that fire is a critical component of healthy ecosystems. Many ecosystems are adapted to periodic fire events. But managed wildfire is often a more effective means of restoring fire to the ecosystem than prescribed burning.

It is also important to note that the time interval is also essential, and for the majority of plant communities in the West, wildfire events are relatively infrequent. The plant communities in the West evolved and existed for millions of years without any human manipulation. Insisting now that we need human ignitions to maintain “healthy ecosystems” is another example of human arrogance.

For example, the natural fire rotation of lodgepole pine, most fir and spruce species, aspen, sagebrush, juniper woodlands, and many other plant communities is often many decades to centuries apart. It is natural for them to occur at high severity when they burn.

Frequent burning low severity blazes do not mimic natural, historical fire frequency, and repeated conflagrations can harm them. Even low elevation plant communities like sagebrush and chaparral evolved in the absence of frequent fire and, when they burn, tend to experience high severity blazes.

Frequent burning of sagebrush landscapes can favor the establishment of exotic flammable species like cheatgrass.

The effectiveness of prescribed burning is exaggerated. There is a place for it in fire management strategies. Still, people looking for a “silver bullet” with prescribed burning or “Indian burning” are ignoring the problems and hyping the benefits far beyond what they can achieve.

Nevertheless, under some conditions, prescribed burning can be a helpful tool. Studies suggest that 99.7 to 99.8% of all prescribed fires stay within their boundaries and achieve the intended prescription; an even more significant percentage avoids damage to homes and other assets. Some regions of the country, such as the Southeast, use prescribed burning successfully. And it can be helpful in the West if one understands its limits. 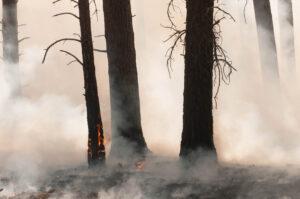 That said, there are problems with implementing prescribed burns across the landscape. The first is that a lot of burning does not mimic natural fires. Most natural fires burn during the dry season, late summer and fall, in much of the PNW and Rockies. In the SW, it is spring (which is one reason these NM fires got away). In most cases, fires are set when fuels are still relatively wet and the chances for moist weather in the month are good. Burning in the spring does not mimic the natural fire cycle in most parts of the West.

These effects, however, are relatively small in part because prescribed burns typically only cover a small acreage. It may require burning 3-4 times vegetation units to reduce wildfire by 1 unit.  In other words, reducing overall fuel over any significant area they don’t work–never has. (Even historic Indian burning was “localized”).

Another problem is that to get any significant acreage, you have to burn just at a point when fuels are dry enough to burn, but the wind isn’t happening. This isn’t easy to predict. Whether prescribed or not, every fire only takes off when there is wind. No wind. No big fires.

The third problem is agencies want and are required to have good smoke dispersal. That means you want some wind.  Of course, those setting prescribed burns try to schedule them when the forecast predicts good conditions, but it doesn’t take much to be off.  Wind doesn’t linearly affect fires; it’s an exponential fire spread effect. A 20 mile an hour wind doesn’t just double fire spread over a ten-mph wind but quadruples it. You can see how easy it would be “off” in a forecast. Say the forecast says winds will be 10 mph, but you get 20-30 mph gusts; well, you just lost the fire.

Another problem with prescribed burning, which is seldom acknowledged, is that you can’t just treat an area once. You have to keep coming back again and again. Why? Because in the process of burning vegetation, you stimulate more vegetation growth by eliminating competition for water, light, and nutrients. The vegetation left often proliferates to fill the void.

Worse for fuel reduction is that you stimulate the growth of the most fire-prone vegetation, i.e., grass, shrubs, and small trees. I have repeatedly seen areas where a prescribed burn occurred that had more fuel within 3-4 years than before the burn simply because the regrowth was so vigorous.

As one researcher has acknowledged: “There has been an irreversible change in fire weather conditions since the 1970s – put simply, the game has changed,” Professor Mackey said. “Targeted burning within one kilometer of houses and towns can help protect them from bushfire, but it must be done every three years.”

Furthermore, when you do not get the “right” conditions for a prescribed burn every year or even in multiple years. So even if you commit to doing prescribed burns, you may not be able to do it regularly. The drought conditions that are occurring now make prescribed burning hazardous.

People do not understand that we are not in the same “historic” conditions as in the last couple of hundred years. It is much drier. It is essentially climate that has controlled fire size and spread, and the role of human fire “suppression” is exaggerated.

As late as the 1970s, glaciers were growing in the PNW, and the climate was significantly cooler and moister. That is when prescribed burning got its “start,” so to speak, as an agency policy. But we don’t have those conditions today.

Implementing a “safe” prescribed burn requires a lot of preparation and many human resources. You can have to mobilize many firefighters to the site to make sure you retain control. If we treated prescribed burns the way we treat “wildfire” and got 50-100 guys at each prescribed burn, you might be able to retain control, but this is not how they are done. 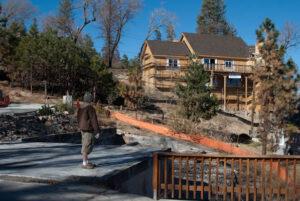 The Grass Valley Fire in Southern California’s San Gabriel Mountains,  burned 199 homes, but only six were started by contact with fire front. The rest were ignited by embers. Photo George Wuerthner.

A further complication is that most homes are not destroyed by direct contact with a high severity fire. Often, embers thrown a considerable distance from the fire front ignites a house, which leads to the ignition of adjacent homes in a domino effect. This is why focusing on the area immediately adjacent to homes to reduce structure flammability is the most effective way to protect communities.

Thus, focusing on prescribed burning in the immediate area surrounding homes may confer some benefit for community safety; the tendency is to do prescribed burns far from the borders of towns.

As noted in a recent critique of the widespread application of prescribed burning: “prescribed fire has a role equivalent to the role of a watering can. A watering can is a good tool for tending the plants around your house, but if you are faced with a dry field in need of irrigation, it would be absurd to propose buying thousands of watering cans. Yet this is basically equivalent to current proposals relying mainly on prescribed fire to restore fire to vast areas. Instead, the right way to water a large field is through large-scale irrigation — a river, not a watering can — and the most efficient way to restore fire to large landscapes is through managed wildfire.”

Finally, the probability that a fire will encounter a prescribed burn (or thinned forest) in the time when fuels are actually reduced (short-lived) is very low in most ecosystems–about 1%.

So you have to ask when the probability that any prescribed burn will influence fire spread is so low, and the chances that the fires might “blow up” is probably in the same probability factor. Is it worth it? 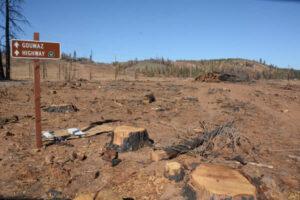 The 2021 900,000 acre Dixie Fire in California burned through forest stands that had been thinned, clearcut and prescribed burned.  Photo George Wuerthner.

The Forest Service is in a very difficult position. The public has the expectation that they can control and reduce large fires. What the agency is unwilling to admit is that thinning, logging or prescribed burning aren’t effective under extreme fire weather conditions. And the only fires that grow to large size, occur under such conditions which includes high temperatures, low humidity, drought and most importantly high winds.

Ultimately we have to reckon with climate warming as the culprit behind large blazes, but many conservative politicians continue to deny that climate change is a human-caused event. Without a change in fossil fuel burning, we can expect more and more large fires in the future. And no amount of prescribed burning (or logging) will have a significant influence on the outcome.

The better solution is to harden homes and communities. Working from the home outward is the best strategy for living with the new fire regime conditions.

Whether we like it or not, wildfires are resetting the ecological parameters of plant communities, so they are better adapted for drier, hotter conditions.

Prescribed burning could be a part of the plan if you are willing to meet the conditions mentioned above about return treatments. But I typically do not see funding or commitment to reburns.