After the Meltdown: the Health Risks of Nuclear Reactors in War Zones

Ukraine’s six-reactor Zaporizhzhia site has already come under attack once, with disaster narrowly averted. A hit could cause a catastrophic radioactive release with far-reaching health consequences. (Photo: onlinewiki.In)

Nuclear power plants are vulnerable to meltdown at any time, but they are especially vulnerable during wars, such as we are seeing in Ukraine, as evidenced by Russian attacks on the six-reactor Zaporizhizhia nuclear power facility and on the closed nuclear facility at Chornobyl in March 2022.

Media articles often dwell on the conditions that could spark a meltdown, but attention should also be paid to the possible human health consequences. We answer some questions about the short-term and long-term consequences for human health of a radiological disaster at a nuclear power plant.

What happens at a reactor during a major nuclear power disaster?

The main dangers would arise at the reactor and at its irradiated fuel pool. Loss of power can result in both of these draining down, as their water contents leaked or boiled away. This would expose highly radioactive fuel rods, resulting in meltdowns and explosions as occurred at Fukushima in Japan in 2011, where large amounts of radioactivity were released into the environment.

Explosions, as happened at both Chornobyl and Fukushima, eject radioactive nuclides high into the atmosphere, so that they travel long distances downwind via weather patterns, such as winds and rain. The result is radioactive fallout over large areas, as occurred at Chornobyl and Fukushima. The map below, from the European Environment Agency, shows that the dispersion and deposition of caesium-137 (Cs-137) from the Chornobyl catastrophe in Ukraine in 1986 was far-reaching — covering 40% of the land area of Europe, as it followed weather patterns over the 10-day period of the accident. 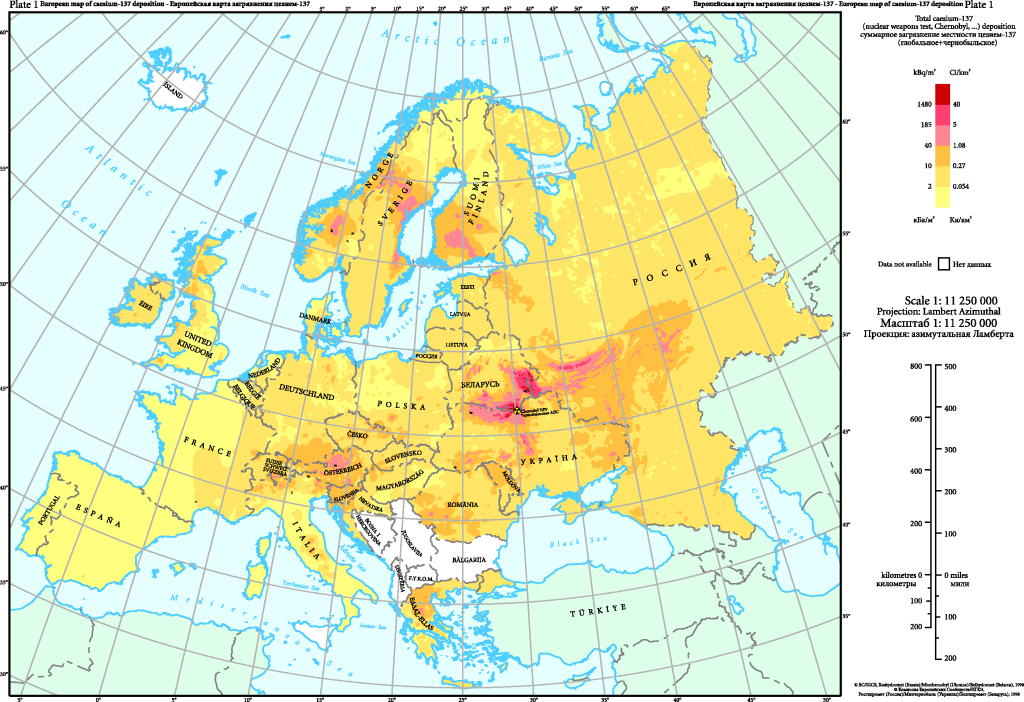 Dispersion and deposition of caesium-137 (Cs-137) from the Chornobyl catastrophe in Ukraine in 1986.

Contrary to what many people think, the radioactive fallout from Chornobyl reached the UK (2,500 km away) in 1986 as also shown in the above map.

In Japan, radiation deposition from Fukushima in 2011 also fell in selective areas of Japan, with some radioactive particles traveling as far as 400 km. It is estimated that about 7% of Japan was seriously contaminated.

In Japan, radiation deposition from Fukushima in 2011 also fell in selective areas of Japan.

What is released during a major nuclear power accident?

In the first few days and weeks after the disaster, the first releases are generally short-lived radioactive gases and vapors including tritium (i.e. as tritiated water vapor), xenon, krypton, and iodine. These gases and vapors deliver harmful exposures to people living downwind of the nuclear plant when they are inhaled.

Later, hundreds of non-volatile nuclides can be released. These are non-gaseous, generally longer-lived radionuclides which can nevertheless travel long distances. They include strontium, caesium and plutonium. These pose dangers over longer time periods, contaminating the trees, farms, fields and urban areas where they settle and recirculate for decades afterwards.

Although media reports usually talk about the half-lives of radionuclides (defined as the time it takes for half of the substance to decay), this is misleading, as the hazardous longevity of these nuclides is often 10 to 20 times longer than their radiological half-life. For example, nuclear waste consultants routinely use 300 years (i.e. 10 x the 30-year half-life of Cs-137) as a benchmark for the required longevity of waste facilities.

What are the harmful health effects?

Both short-lived and long-lived nuclides are dangerous.

Although short-lived radionuclides, for example, iodine-131 (I-131) with a half-life of 8.3 days, decay relatively quickly, this means that their doses-rates are high. Therefore during their short times they still give high doses. These cause (a) immediate impacts (e.g. skin rashes, metallic taste, nausea, hair loss, etc.) and (b) diseases years later, such as thyroid cancer, long after the nuclide has decayed away. As they decay, they result in exposures both externally (e.g. to skin) and internally, by inhalation or ingestion.

Longer-lived nuclides in the environment, such as caesium-131 (Cs-137) with a half-life of 30 years, also pose dangers. These occur both initially during the first phases of a catastrophe when they are inhaled or ingested but also decades later when soils and leaf litter are disturbed by storms or forest fires. They can continually expose subsequent generations of people and animals, especially those unable to evacuate from contaminated areas or who lack access to clean food.

Can I protect myself and my family?

The main responses to a nuclear disaster are shelter, evacuation and stable iodine prophylaxis. The most important, in terms of preventing future cancer epidemics, is evacuation, in other words, reducing exposure time as much as possible.

However unless evacuations are properly planned and executed, they can add to the death toll. For an accurate account of what happened during the poorly planned evacuations after the Fukushima see Ian Fairlie’s article, Evacuations After Severe Nuclear Accidents.

Shelter means staying indoors and closing all doors and windows tightly, blocking any areas where air might enter.

Potassium iodide (KI) tablets are proven to be effective in protecting against the harmful effects of fast-traveling iodine-131, as radioactive gases are the first to arrive in the event of a nuclear disaster. This protection is particularly important for pregnant women and children. However KI ONLY protects the thyroid and does NOT provide protection against exposures to the other nuclides commonly released during nuclear accidents, such as caesium-137, strontium-90 and tritium.

Harm down the generations and continuing recontamination

The contamination released by nuclear reactors doesn’t stay in one place. Through forest fires, heavy rains, snowmelt, and human activities such as war, radioactivity in plants and soils can be resuspended later on, becoming available for yet more inhalation or ingestion, ensuring ongoing exposures.

Animals living on contaminated lands show an increased sensitivity to radiation compared to their parents. (Photo of wild boar in Germany, Wikimedia Commons)

What we already know about health effects from nuclear accidents

The radioactive plumes from the Three Mile Island (TMI) nuclear catastrophe near Harrisburg, Pennsylvania US in 1979 resulted in local people complaining of skin rashes, metallic tastes in their mouths, hair loss (Wing, 1997) and the deaths of their pets. These are all deterministic (i.e. cell killing) effects due to exposures to the very high concentrations of the radioactive gases iodine, krypton, xenon and tritium vapor released during the TMI accident. Radiation levels were so high they overwhelmed radiation monitors, which then failed to measure levels, or erroneously registered them as zero.

At TMI, Chornobyl, and Fukushima, children exposed to radioactive iodine in the initial release experienced thyroid problems, including thyroid cancer. At Chornobyl, the link between this exposure and thyroid cancer was definitively made and even accepted by radiation authorities – see UNSCEAR (2008). After Fukushima, the incidence of thyroid cancer has increased to 20 times the expected number of thyroid cancers among those exposed as children. However the Japanese Government and its agencies have refrained from accepting these figures.

Because many health impacts appear years or decades after the radiological catastrophe, this allows governments, media and nuclear power proponents to claim minimal health impacts, and thereby to misrepresent the true state of affairs. This downplays the significant long-term health impacts of accidents, including among those who were not alive when the initial radioactive fallout occurred.

For example, the Torch 2 report in 2016 showed a long list of other health effects apart from thyroid cancer after the Chornobyl disaster. 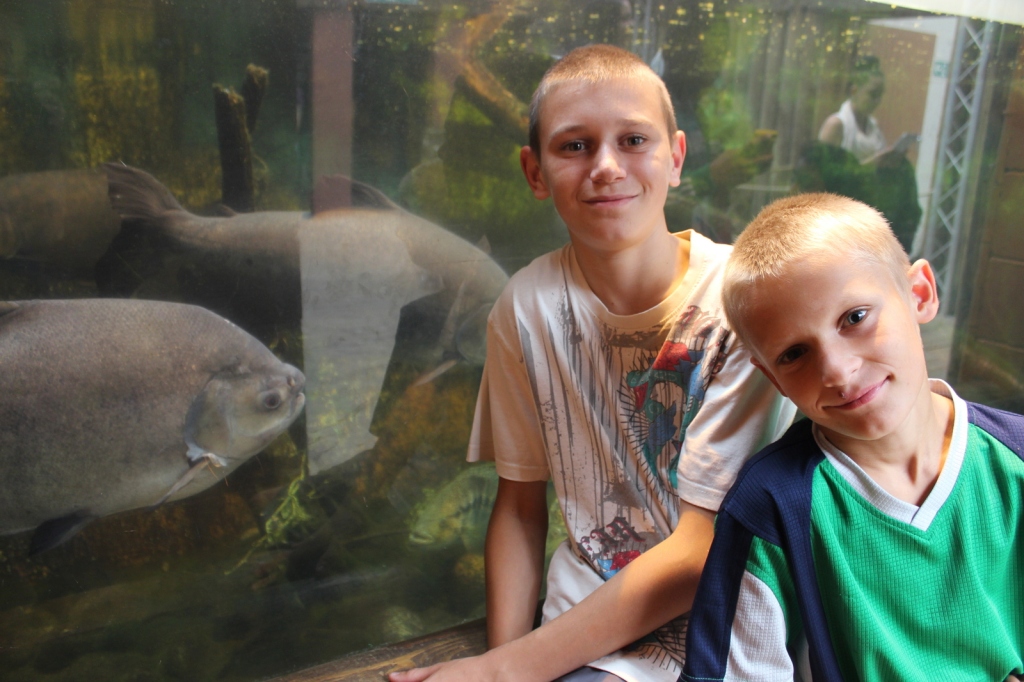 Animals are also harmed: they have been found to suffer from genetic mutations, tumors, eye cataracts, sterility and neurological impairment, along with reductions in population sizes and biodiversity in areas of high contamination.

What needs to happen

During the confusion and upheaval of past nuclear catastrophes, authorities have invariably attempted to downplay the dangers, deny the risks, and even raise allowable levels of radiation exposures. In all cases, they have comprehensively failed to protect the public. This needs to change.

Officials need to acknowledge the connection between radiation exposures and negative health impacts, particularly among women and children, so that early diagnoses and treatments can be provided. Independent, rather than industry-funded, science is needed to fully understand the cross-generational impact of radiation exposures.

Ultimately, the best protection is the elimination of the risk of exposure, whether from routine radioactive releases or from a major disaster. The most effective, and precautionary, approach, is the prompt phaseout of nuclear power and its supporting industries, which would be beneficial for both health and the climate.

Read the report with full references — Possible health consequences of radioactive releases from stricken nuclear reactors — and a second report by Dr. Fairlie — A Primer on Radiation and Radioactivity—here.