Why the Southwest is Burning 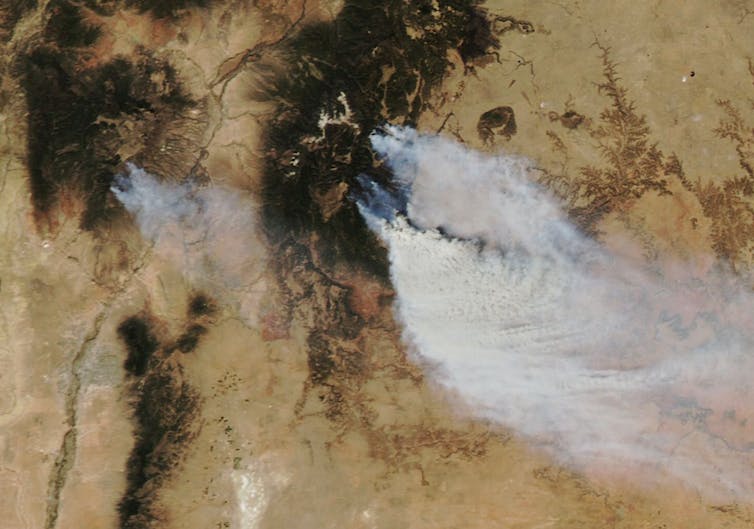 By May 4, nearly a quarter-million acres had burned in New Mexico, almost double the state’s 2021 total. Fires shown by satellite and on the map below are near Los Alamos and Las Vegas, N.M. NASA.

New Mexico and Arizona are facing a dangerously early fire season. It has left neighborhoods in ashes and is having such devastating effects that President Joe Biden issued a disaster declaration for New Mexico. Over 600 fires had broken out in the two states by early May, and large wildfires had burned through hundreds of homes near Ruidoso and Las Vegas, New Mexico, and Flagstaff, Arizona.

We asked wildfire scientist Molly Hunter at the University of Arizona to explain what’s fueling the extreme fire conditions and why risky seasons like this are becoming more common.

Why is this year’s wildfire season in the Southwest so early and intense?

Historically, fire season in the Southwest didn’t ramp up until late May or June, because fuels that carry fires – primarily woody debris, leaf litter and dead grasses – didn’t fully dry out until then.

Now, the Southwest is seeing more fires start much earlier in the year. The earlier fire season is partly due to the warming climate. As temperatures rise, the snow melts more rapidly, more water evaporates into the atmosphere and the grasses and other fuels dry out earlier in the season.

Unfortunately, the earlier timing coincides with when the region commonly experiences strong winds that can drive rapid fire growth. Some of the fires we’re seeing this year, like the Tunnel Fire near Flagstaff and the fires in New Mexico, are being driven by these really intense wind events. They’re pretty typical winds for spring, but fuels are now really dry and ready to burn.

This year we also have a lot of fuel to burn. Last summer, in 2021, the Southwest had an exceptional monsoon season that left green hillsides and lots of vegetation. By now the grasses and forbs that established during the monsoon have dried out, leaving a lot of biomass that can carry a fire. Often in the Southwest, our biggest fire years come when we have a wet period followed by a dry period, like the La Niña conditionswe’re experiencing now.

What role does climate change play?

In the Southwest, climate change has meant warmer, drier conditions. One immediate effect is the lengthening of the fire season.

We now see fires starting in March and April. And if the Southwest doesn’t get a good summer monsoon – the region’s typical period of heavy rainstorms – fire season won’t really stop until we get significant rainfall or snowfall in fall and winter. That means more stress on firefighting resources, and more stress on communities facing fire, smoke and evacuations.

As fire season lengthens, states are also seeing more fires caused by human activities, such as fireworks, sparks from vehicles or equipment, and power lines. More people are moving out into areas that are fire-prone, creating more opportunities for human-caused ignitions. 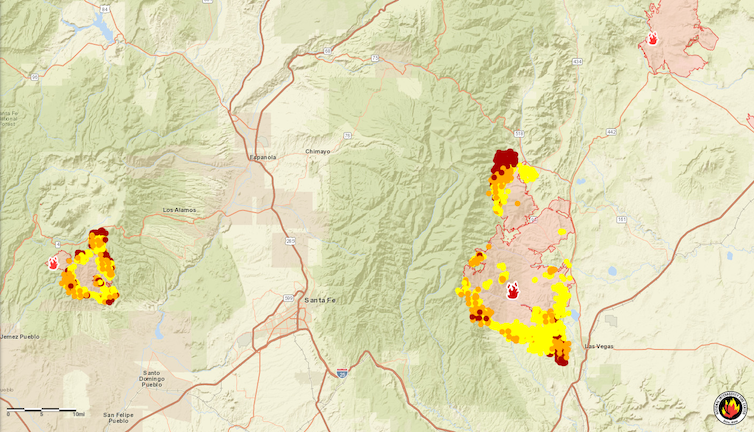 What effect is the changing fire regime having on the Southwest’s ecosystems?

When fires burn in areas that didn’t see fire historically, they can transform ecosystems.

People generally don’t think of fire as being a natural part of desert ecosystems, but grasses are now fueling really big fires in the desert, like Arizona’s Telegraph Fire in 2021. These fires are also spreading farther, and into different ecosystems. The Telegraph Fire started in a desert system, then burned through chaparral and into the mountains, with pine and conifer forest.

Part of the problem is invasive grasses like buffelgrass and red brome that spread quickly and burn easily. A lot of grass is now growing in those desert systems, making them more prone to wildfire.

When a fire spreads in the desert, some plant species, like mesquite and other brushy plants, can survive. But the saguaro – the iconic cactuses that are so popular in tourist visions of the Southwest – are not well adapted to fire, and they often die when exposed to fire. Paloverde trees are also not well adapted to survive fires.

What does comes back quickly is the grasses, both native and invasive. So in some areas we’re seeing a transition from desert ecosystem to a grassland ecosystem that is very conducive to the spread of fire.

The Cave Creek Fire near Phoenix in 2005 is an example where you can see this transition. It burned over 240,000 acres, and if you drive around that area now, you don’t see lot of saguaros. It doesn’t look like desert. It looks like more like annual grassland.

This is an iconic landscape, so the loss affects tourism. It affects wildlife as well. A lot of species rely on saguaro for nesting and feeding. Bats rely on the flowers for nectar.

What can be done to avoid high fire risk in the future?

In some respects, people will have to recognize that fire is inevitable.

Fires quickly now surpass our capacity to control them. When winds are strong and the fuels are really dry, there’s only so much firefighters can do to prevent some of these big fires from spreading.

Conducting more prescribed fires to clear out potential fuel is one important way to lessen the probability of really big, destructive blazes.

Historically, far more money went into fighting fires than managing the fuels with tactics like thinning and prescribed fire, but the infrastructure bill signed in 2021 included a huge influx of funding for fuels management. There’s also a push to move some seasonal fire crew jobs to full-time, yearlong positions to conduct thinning and prescribed burns.

Homeowners can also be better prepared to live with fires. That means maintaining yards and homes by removing debris so they’re less likely to burn. It also means being prepared to evacuate.