After reading the article in the October 7th Bozeman Daily Chronicle titled “Timber Treatment” about the North Bridger logging project on the Custer Gallatin National Forest of Montana one gets the idea that until the Forest Service and timber industry came along to “fix” things; our forests were going to hell in a handbasket.

For instance, the Forest Service’s silviculturist interviewed for the article suggests the reason for the project is to promote “ForestHealth.” But, of course, the timber industry and Forest Service have defined what constitutes “health” conveniently based on the Industrial Forestry Paradigm, which favors logging as the solution to any problem—real or imagined.

The irony of “forest health” as a justification for logging is that much science finds the second-highest biodiversity occurs after significant bark beetle outbreaks or wildfire. There are more bees, birds, small mammals, flowers, fungi, and shrubs. All of which contribute to diversity—which ostensibly the Forest Service suggests is the goal of the project.

But instead of allowing these natural agents to operate, the Forest Service is doing everything in its power to reduce their influence and substitute chainsaws for biological processes.

Of course, the Forest Service justifies the logging by arguing if they don’t kill the trees with chainsaws, well by golly, the trees might die from a fire or bark beetles. That’s like suggesting we should shoot all humans at forty years of age so they won’t die from heart attacks or cancer when they get older. 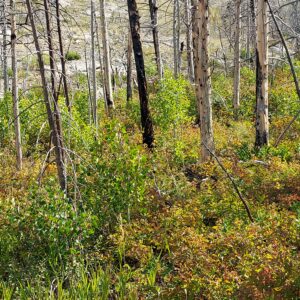 For instance, the agency says it must log larger conifers as a means of promoting aspen. But bark beetle target large trees and often kill them at no cost to taxpayers. However, from the Forest Service’s distorted view of forest health natural mortality from bark beetles is somehow considered a sign of “unhealthy” forests.

The problem with the Forest Service staff is that they are so immersed in the Industrial Forestry paradigm that the only mortality of trees they accept is that from chainsaws.

The idea that removal of larger Douglas fir will reduce large wildfires is another myth the Forest Service promotes. What burns in a wildfire are fine fuels like needles, shrubs, grass, and so forth. Large trees remain as snags, primarily because they do not combust easily. Larger trees also last longer in the ecosystem. They take much longer to rot and decompose, so they are critical to retain on-site—even if they die or are dead. Their removal by the timber industry diminishes the health of the forest ecosystem. 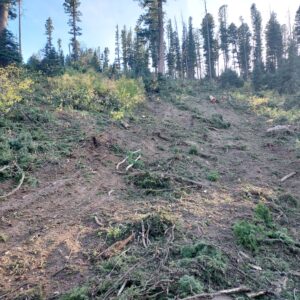 Logging roads and skid trails create a disturbance that favors the spread of weeds, compacts soils, and is a major source of chronic sedimentation that enters streams impacting aquatic ecosystems. Photo George Wuerthner.

“Chainsaw medicine” has many impacts that the agency personnel either downplay or ignore. For instance, logging roads are a significant avenue for the spread of weeds. The mere creation of a road also displaces native wildlife like elk. Removing larger trees (which the agency is doing) diminishes the wildlife habitat that dead trees provide for many different species, from insects to bats.

In an era of climate warming, protecting our forests from chainsaw medicine for carbon storage is the single greatest “good” that national forests can provide society. Research, which the FS ignores, shows that logging and wood processing contribute to significant CO2 emissions—typically much greater than any produced by a wildfire—thus exacerbating fire spread and insect outbreaks. Moreover, even after a wildfire, most of the carbon remains on the site as snags, roots, and charcoal, all of which provide long-term carbon storage.

The real threat to our forest ecosystems doesn’t come from wildfire or bark beetles or any other natural agent, rather from the perverse ideas about forest health promoted by the Industrial Forestry Paradigm.