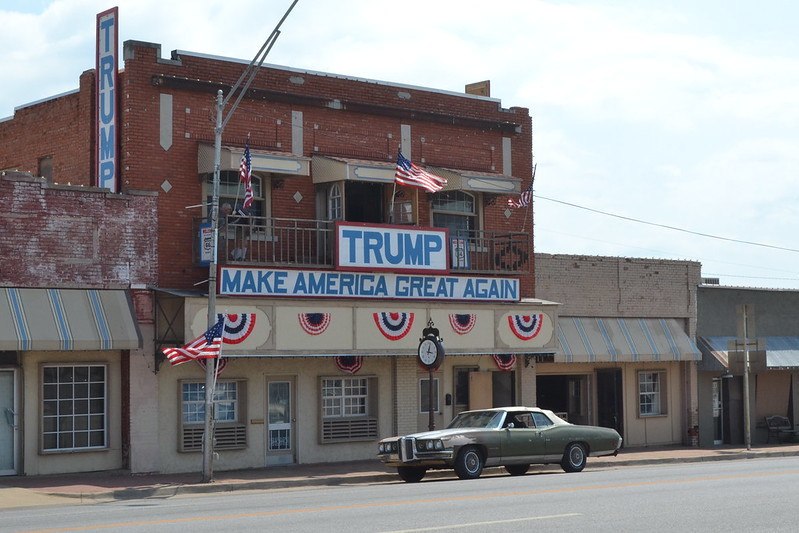 My state of Ohio is home to many shit-life syndrome sufferers. In the 2016 presidential election, Hillary Clinton lost Ohio’s 18 electoral votes to Trump. She got clobbered by over 400,000 votes (more than 8%). She lost 80 of Ohio’s 88 counties. Trump won rural poorer counties, several by whopping margins. Trump got the shit-life syndrome vote.

Will Hutton in his 2018 Guardian piece, “The Bad News is We’re Dying Early in Britain – and It’s All Down to ‘Shit-Life Syndrome’” describes shit-life syndrome in both Britain and the United States: “Poor working-age Americans of all races are locked in a cycle of poverty and neglect, amid wider affluence. They are ill educated and ill trained. The jobs available are drudge work paying the minimum wage, with minimal or no job security.”

For most of these low-wage workers, Hutton notes: “Finding meaning in life is close to impossible; the struggle to survive commands all intellectual and emotional resources. Yet turn on the TV or visit a middle-class shopping mall and a very different and unattainable world presents itself. Knowing that you are valueless, you resort to drugs, antidepressants and booze. You eat junk food and watch your ill-treated body balloon. It is not just poverty, but growing relative poverty in an era of rising inequality, with all its psychological side-effects, that is the killer.”

Shit-life syndrome is not another fictitious illness conjured up by the psychiatric-pharmaceutical industrial complex to sell psychotropic drugs. It is a reality created by corporatist rulers and their lackey politicians—pretending to care about their minimum-wage-slave constituents, who are trying to survive on 99¢ boxed macaroni and cheese prepared in carcinogenic water, courtesy of DuPont or some other such low-life leviathan.

The Cincinnati Enquirer, in November 2019, ran the story: “Suicide Rate Up 45% in Ohio in Last 11 Years, With a Sharper Spike among the Young.” In Ohio between 2007 and 2018, the rate of suicide among people 10 to 24 has risen by 56%. The Ohio Department of Health reported that suicide is the leading cause of death among Ohioans ages 10‐14 and the second leading cause of death among Ohioans ages 15‐34, with the suicide rate higher in poorer, rural counties.

Overall in the United States, “Suicides have increased most sharply in rural communities, where loss of farming and manufacturing jobs has led to economic declines over the past quarter century,” reports the American Psychological Association. The U.S. suicide rate has risen 33% from 1999 through 2017 (from 10.5 to 14 suicides per 100,000 people).

“In 2016, Donald Trump captured 68 percent of the vote in West Virginia, a state hit hard by opioid overdoses,” begins the 2018 NPR story: “Analysis Finds Geographic Overlap In Opioid Use And Trump Support In 2016.”

The NPR story was about a study published in JAMA Network Open titled “Association of Chronic Opioid Use With Presidential Voting Patterns in US Counties in 2016,” lead authored by physician James Goodwin. In counties with high rates of opioid use, Trump received 60% of the vote; but Trump received only 39% of the vote in counties with low opioid use. Opioid use is prevalent in poor rural counties, as Goodwin reports in his study: “Approximately two-thirds of the association between opioid rates and presidential voting was explained by socioeconomic variables.”

Goodwin told NPR: “It very well may be that if you’re in a county that is dissolving because of opioids, you’re looking around and you’re seeing ruin. That can lead to a sense of despair . . . . You want something different. You want radical change.”

Shit-life syndrome sufferers are looking for immediate change, and are receptive to unconventional politicians.

In 2016, Trump understood that being unconventional, including unconventional obnoxiousness, can help ratings. So he began his campaign with unconventional serial humiliations of his fellow Republican candidates to get the nomination; and since then, his unconventionality has been limited only by his lack of creativity—relying mostly on the Roy Cohn modeled “Punch them harder than they punch you” for anyone who disagrees with him.

I talked to Trump voters in 2016, and many of them felt that Trump was not a nice person, even a jerk, but their fantasy was that he was one of those rich guys with a big ego who needed to be a hero. Progressives who merely mock this way of thinking rather than create a strategy to deal with it are going to get four more years of Trump.

The Dems’ problem in getting the shit-life syndrome vote in 2020 is that none of their potential nominees for president are unconventional. In 2016, Bernie Sanders achieved some degree of unconventionality. His young Sandernistas loved the idea of a curmudgeon grandfather/eccentric uncle who boldly proclaimed in Brooklynese that he was a “socialist,” and his fans marveled that he was no loser, having in fact charmed Vermonters into electing him to the U.S. Senate. Moreover, during the 2016 primaries, there were folks here in Ohio who ultimately voted for Trump but who told me that they liked Bernie—both Sanders and Trump appeared unconventional to them.

While Bernie still has fans in 2020, he has done major damage to his “unconventionality brand.” By backing Hillary Clinton in 2016, he resembled every other cowardly politician. I felt sorry for his Sandernistas, heartbroken after their hero Bernie—who for most of his political life had self-identified as an “independent” and a “socialist”—became a compliant team player for the corporatist Blue Team that he had spent a career claiming independence from. If Bernie was terrified in 2016 of risking Ralph Nader’s fate of ostracism for defying the corporatist Blue Team, would he really risk assassination for defying the rich bastards who own the United States?

So in 2020, this leaves realistic Dems with one strategy. While the Dems cannot provide a candidate who can viscerally connect with shit-life syndrome sufferers, the Dems can show these victims that they have been used and betrayed by Trump.

Here in Ohio in counties dominated by shit-life syndrome, the Dems would be wise not to focus on their candidate but instead pour money into negative advertising, shaming Trump for making promises that he knew he wouldn’t deliver on: Hillary has not been prosecuted; Mexico has paid for no wall; great manufacturing jobs are not going to Ohioans; and most importantly, in their communities, there are now even more suicides, drug overdose deaths, and grieving families.

You would think a Hollywood Dem could viscerally communicate in 30 seconds: “You fantasized that this braggart would be your hero, but you discovered he’s just another rich asshole politician out for himself.” This strategy will not necessarily get Dems the shit-life syndrome vote, but will increase the likelihood that these folks stay home on Election Day and not vote for Trump.