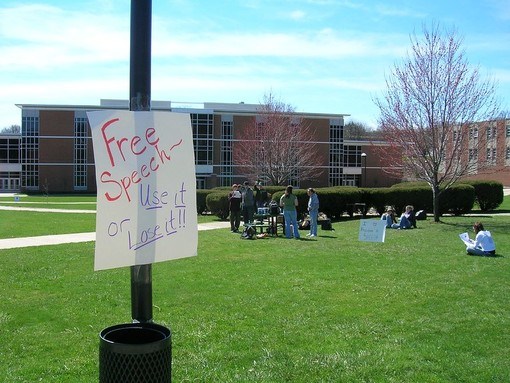 The Knight Foundation released a study that details the attitudes surrounding free speech in our precious young people today. Generational tension is on the rise as young people confront the richer and more conservative “Boomer” generation. Among the many divides is the attitude towards free speech.

Women and people of color feel more socially empowered than past generations even as economic prospects become slimmer and slimmer. This has led to a reactionary boomer weaponization against the marginalized and their allies that takes its form in a myriad of ways. One of these ways, perhaps not the most harmful and certainly one of the more legally acceptable is the use of free speech as a weapon of oppression.

But the divide isn’t so much a generational one as it is a gender and racial one. The Knight Foundation finds: “There has been a modest increase in average support among students for the first amendment. However, there are significant differences in First Amendment support by race across all years, and gender, beginning in 2011.” Interestingly enough this means that white (presumably heteronormative) males not only are more in favor of free speech than ever before but so much in favor that they outweigh all other identity groups who have become more skeptical.

The Knight Foundation continues: “Boys and white students are less inclined than girls and students of color to agree with the statement: “The First Amendment goes too far in the rights it guarantees.”” On the flip side Donald Trump and the Republican Party have effectively organized around a mythical liberal consensus that infringes on the freedoms of free-thinking fascists.

From this dynamic, we see that Mr. Trump has done more to endanger the First Amendment than help it, based on his threatening and dangerous speech. By making speech itself the terror Mr. Trump can effectively mobilize his base against the poor and vulnerable while at the same time leaving many feeling as if free speech itself is the danger. This can at the same time lead to a distrust of the supposedly neutral right of free speech, which in turn justifies restrictions on speech by the very same forces that frame hate speech as free speech.

The result of this dynamic is an overall distrust of the system and the whittling away of free speech protections for journalists, activists and whistleblowers who are speaking truth to power. Note the contraction between Mr. Trump’s championing of free (hate) speech and his treatment of anyone who dares to question his tyrant rule.

Hence we find that the right to free speech has not only gone too far but has not gone far enough. It should be possible to interpret the right to speech ambiguously, just as Mr. Trump has. Hate speech can be used against corporate rule, and this speech should be free. Love speech can be used for those most marginalized by words and deeds of hate, and this speech should be free. But if marginalized people are saying free speech has gone too far perhaps we need to seriously evaluate what it means to be free.

Does freedom entail private property, exclusive speech, deportations, violence against protestors, slave labor in poor and dark communities, and subjection of woman? If this is freedom then perhaps freedom has gone too far. Martin Luther King Jr. got it right when he said no one is free until we are all free. This is not just a relationship of idealism or solidarity he is speaking about but also a very concrete definition of the emancipation of souls.

The hateful person is not free, for they handcuff themselves to the person they hate and it is only in this joint destruction that the hateful person finds any form of self-expression. No one can deny this act of self-actualization is itself an expression of freedom but if freedom can only be achieved through enslavement to mastery itself then freedom has gone too far. It is no surprise that it is those who are most enslaved that can accurately problematize freedom. In other words, freedom of anything, including speech, should not only be limited to its negative form but also should be possible in its positive form.

How then should we deal with these contradictions? The Knight Foundation argues that today’s education does more for students asking these sorts of questions about their rights: “At the curricular level, schools also have evolved in terms of both the content of civics education and general pedagogical approaches, which look nothing like the staged, lecture-based classroom model of prior generations in many high schools.”

The First Amendment specifically has become more prominent in schools. The number of students who have taken a class that dealt with the First Amendment has gone up from 58% in 2004 to 72% in 2006, according to the study.

Social media, much-maligned, has had fascinating effects: “the course of the surveys, there has been evidence that news consumption is associated with stronger First Amendment support. In 2011, the survey first noted student use of social media to access “news and information” were more likely to signal greater support for free expression rights.” This information presents a contradiction that classical liberals and conservatives have to address. Is social media creating an environment for free speech or false speech? Or more crucially, is there a difference?

The contradiction deepens: “53% of students agree that ”social media stifles free expression because people are afraid of being attacked or shamed by those who disagree with them.” More than two-thirds of students (69%) believe that it is “too easy for people to say things anonymously on social media.”” The majority of youth then see social media as both going too far and not far enough in terms of free speech. This opinion which can make little sense legally perhaps shows the speed at which social media has taken over society’s discourse and news consumption.

Also of note: “Generally speaking, the Midwest and West were the most supportive of First Amendment rights, as of 2018, whereas the students in the Northeast and South were more likely to believe the First Amendment goes too far.” Has the First Amendment become a swing issue or are its split in demographics more complicated than the polarized American public in general?

It is hard to know what to think exactly. For those silly boomers, social media has mostly made fascism more accessible and reductive. Although for young people it is often used to unpack lies of American Empire. And yet at the same time discourse across the political spectrum has become so degraded, vulgar and ideological one is almost begging for a boomer to step in for civility’s sake. Bullying and hierarchy remain dangers across the age spectrum. Kids stuff people into lockers, adults send them into bankruptcy. Speech remains a complex question of freedom and oppression, but there is little nuance in capital: it should not be free, it should be highly regulated, and when possible, abolished, for it has no human questions or intent. The only intent of capital is malice.