The 12-Step Method of Regime Change

On 15 September 1970, US President Richard Nixon and National Security Advisor Henry Kissinger authorised the US government to do everything possible to undermine the incoming government of the socialist president of Chile, Salvador Allende. Nixon and Kissinger, according to the notes kept by CIA Director Richard Helms, wanted to ‘make the economy scream’ in Chile; they were ‘not concerned [about the] risks involved’. War was acceptable to them as long as Allende’s government was removed from power. The CIA started Project FUBELT, with $10 million as a first instalment to begin the covert destabilisation of the country. 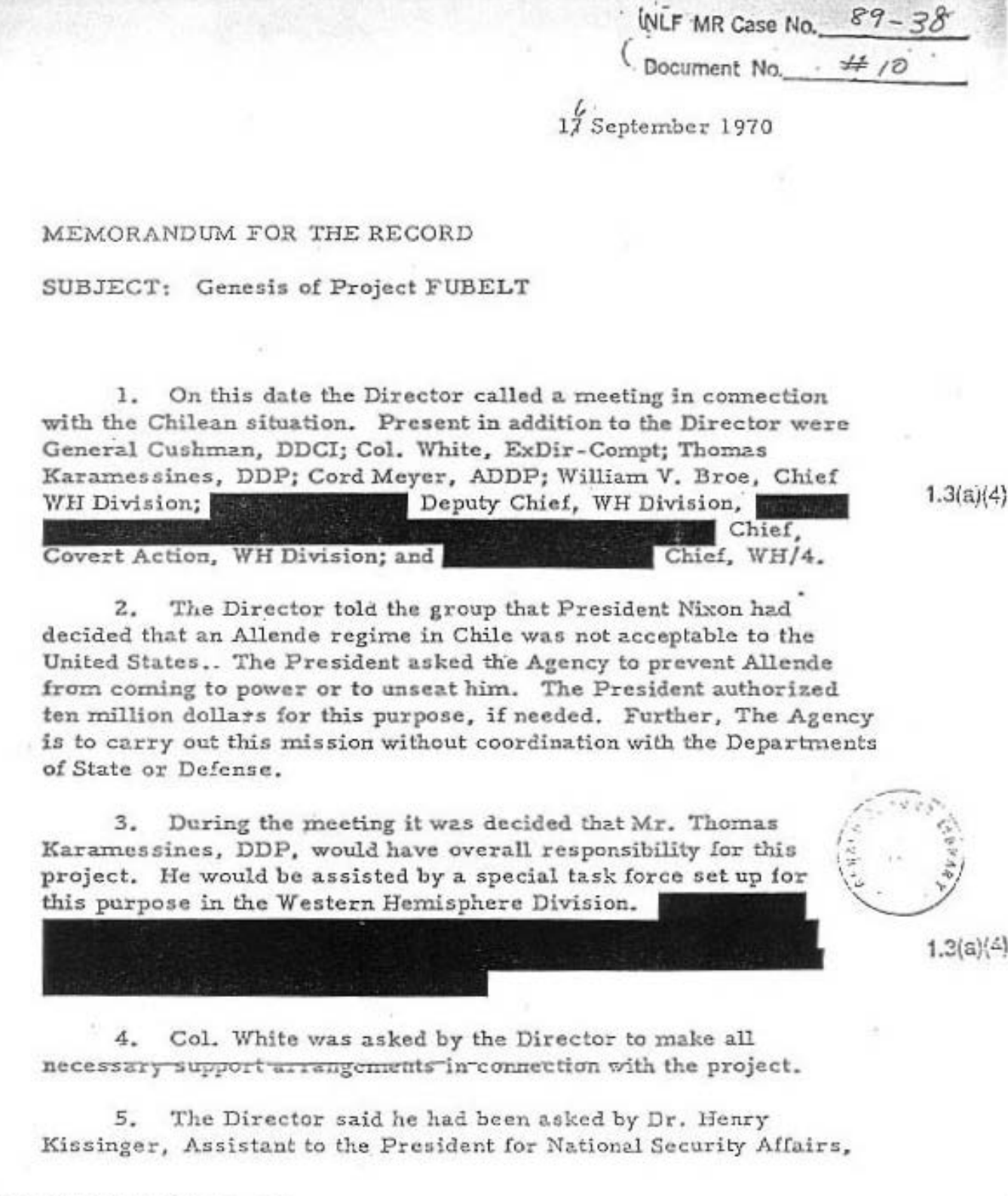 US business firms, such as the telecommunication giant ITT, the soft drink maker Pepsi Cola and copper monopolies such as Anaconda and Kennecott, put pressure on the US government once Allende nationalised the copper sector on 11 July 1971. Chileans celebrated this day as the Day of National Dignity (Dia de la Dignidad Nacional). The CIA began to make contact with sections of the military seen to be against Allende. Three years later, on 11 September 1973, these military men moved against Allende, who died in the regime change operation. The US ‘created the conditions’ as US National Security Advisor Henry Kissinger put it, to which US President Richard Nixon answered, ‘that is the way it is going to be played’. Such is the mood of international gangsterism. 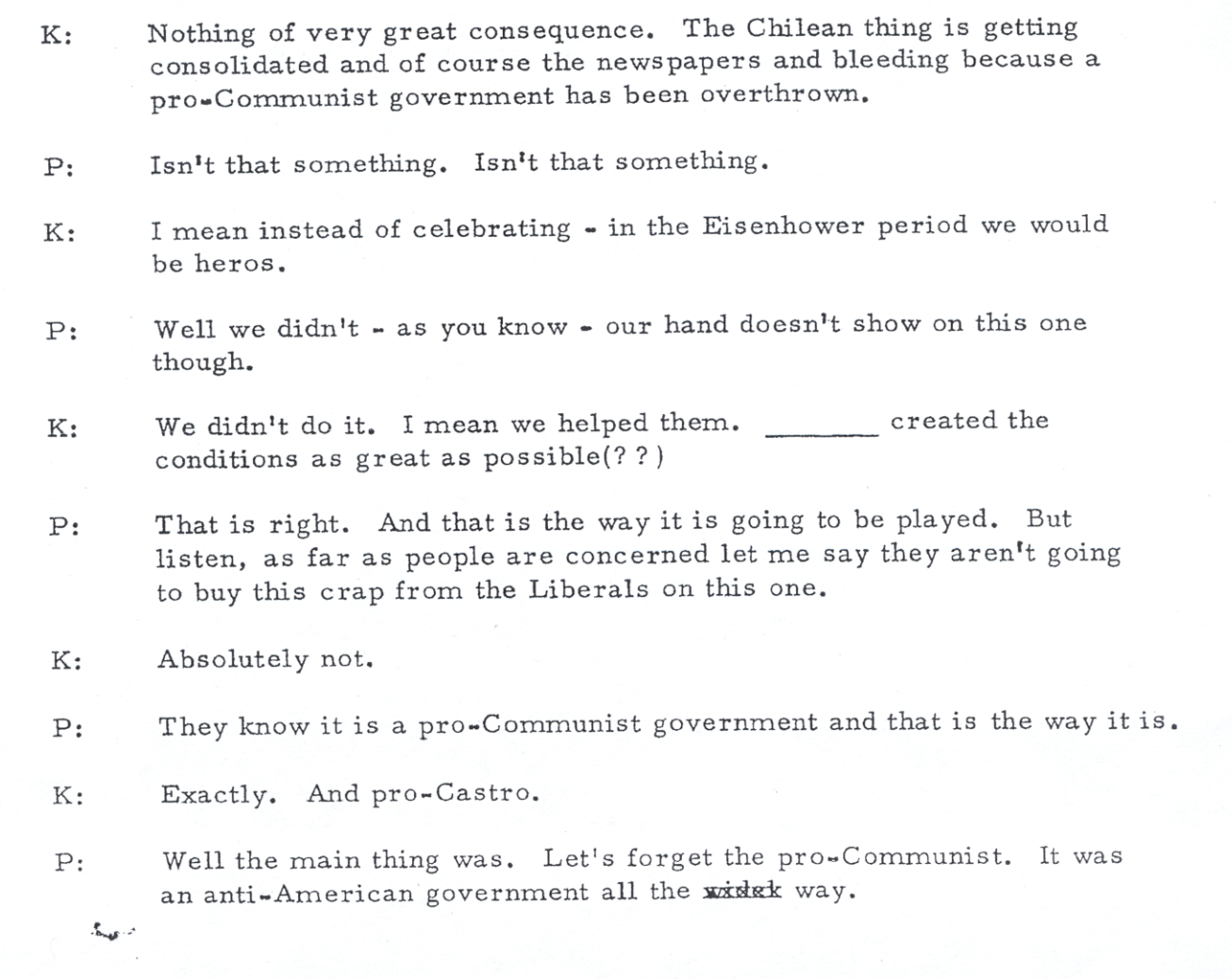 Chile entered the dark night of a military dictatorship that turned over the country to US monopoly firms. US advisors rushed in to strengthen the nerve of General Augusto Pinochet’s cabinet.

What happened to Chile in 1973 is precisely what the United States has attempted to do in many other countries of the Global South. The most recent target for the US government – and Western big business – is Venezuela. But what is happening to Venezuela is nothing unique. It faces an onslaught from the United States and its allies that is familiar to countries as far afield as Indonesia and the Democratic Republic of Congo. The formula is clichéd. It is commonplace, a twelve-step plan to produce a coup climate, to create a world under the heel of the West and of Western big business. 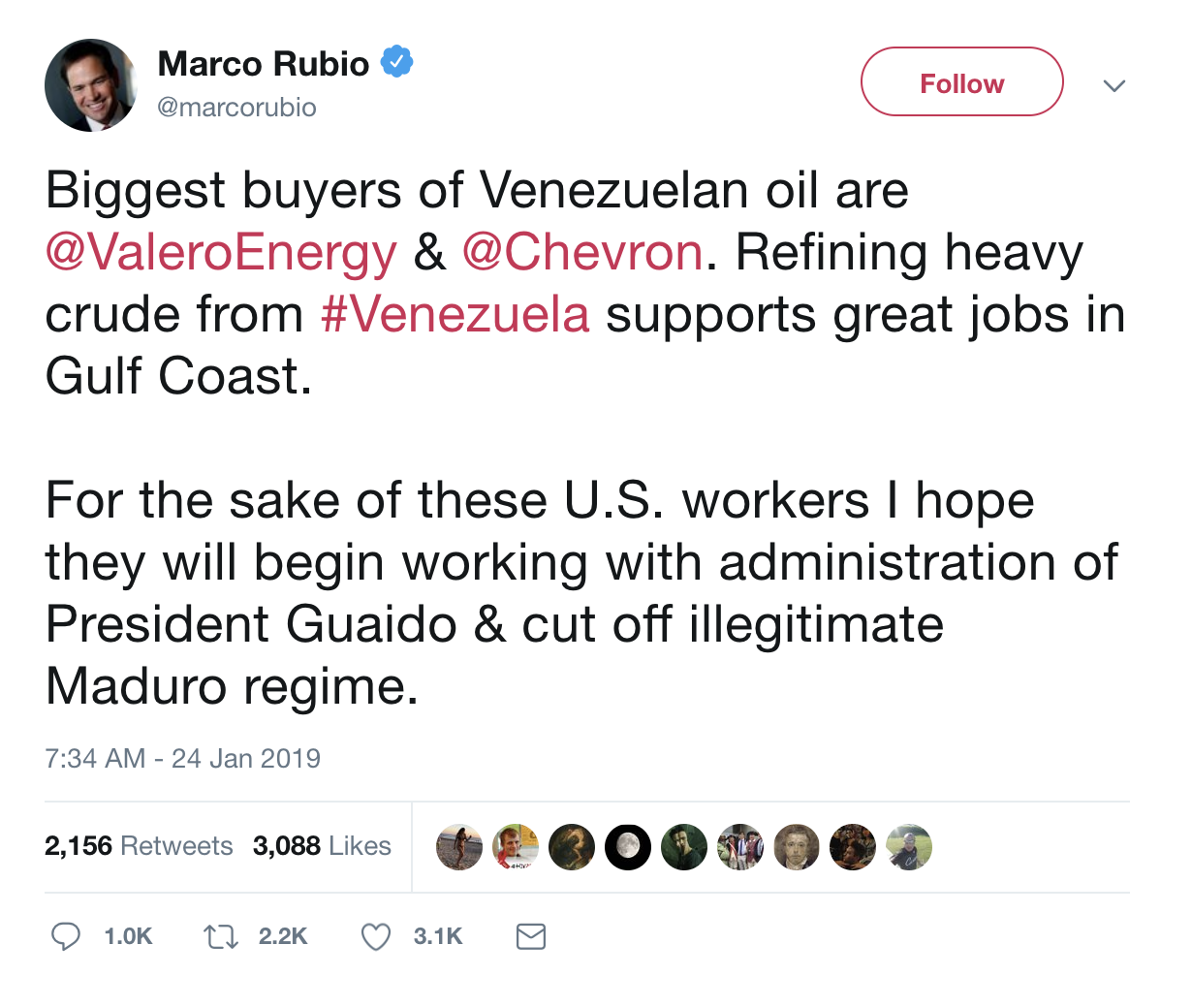 Most of the Global South remains trapped by the structures put in place by colonialism. Colonial boundaries encircled states that had the misfortune of being single commodity producers – either sugar for Cuba or oil for Venezuela. The inability to diversify their economies meant that these countries earned the bulk of their export revenues from their singular commodities (98% of Venezuela’s export revenues come from oil). As long as the prices of the commodities remained high, the export revenues were secure. When the prices fell, revenue suffered. This was a legacy of colonialism. Oil prices dropped from $160.72 per barrel (June 2008) to $51.99 per barrel (January 2019). Venezuela’s export revenues collapsed in this decade.

Step Two: The Defeat of the New International Economic Order. In 1974, the countries of the Global South attempted to redo the architecture of the world economy. They called for the creation of a New International Economic Order (NIEO) that would allow them to pivot away from the colonial reliance upon one commodity and diversify their economies. Cartels of raw materials – such as oil and bauxite – were to be built so that the one-commodity country could have some control over prices of the products that they relied upon. The Organisation of Petroleum Exporting Countries (OPEC), founded in 1960, was a pioneer of these commodity cartels. Others were not permitted to be formed. With the defeat of OPEC over the past three decades, its members – such as Venezuela (which has the world’s largest proven oil reserves) – have not been able to control oil prices. They are at the mercy of the powerful countries of the world.

Emboldened by Western domination, monopoly firms act with disregard for the law. As Kambale Musavuli and I write of the Democratic Republic of Congo, its annual budget of $6 billion is routinely robbed of at least $500 by monopoly mining firms, mostly from Canada – the country now leading the charge against Venezuela. Mispricing and tax avoidance schemes allow these large firms (Canada’s Agrium, Barrick and Suncor) to routinely steal billions of dollars from impoverished states.

Step Five: Debt as a Way of Life.

Unable to raise money from commodity sales, hemmed in by a broken world agricultural system and victim of a culture of plunder, countries of the Global South have been forced to go hat in hand to commercial lenders for finance. Over the past decade, debt held by the Global South states has increased, while debt payments have ballooned by 60%. When commodity prices rose between 2000 and 2010, debt in the Global South decreased. As commodity prices began to fall from 2010, debts have risen. The IMF points out that of the 67 impoverished countries that they follow, 30 are in debt distress, a number that has doubled since 2013. More than 55.4% of Angola’s export revenue is paid to service its debt. And Angola, like Venezuela, is an oil exporter. Other oil exporters such as Ghana, Chad, Gabon and Venezuela suffer high debt to GDP ratios. Two out of five low-income countries are in deep financial distress.

With little incoming revenue and low tax collection rates, public finances in the Global South has gone into crisis. As the UN Conference on Trade and Development points out, ‘public finances have continued to be suffocated’. States simply cannot put together the funds needed to maintain basic state functions. Balanced budget rules make borrowing difficult, which is compounded by the fact that banks charge high rates for money, citing the risks of lending to indebted countries.

Impossible to raise funds, trapped by the fickleness of international finance, governments are forced to make deep cuts in social spending. Education and health, food sovereignty and economic diversification – all this goes by the wayside. International agencies such as the IMF force countries to conduct ‘reforms’, a word that means extermination of independence. Those countries that hold out face immense international pressure to submit under pain of extinction, as the Communist Manifesto (1848) put it.

The total number of migrants in the world is now at least 68.5 million. That makes the country called Migration the 21st largest country in the world after Thailand and ahead of the United Kingdom. Migration has become a global reaction to the collapse of countries from one end of the planet to the other. The migration out of Venezuela is not unique to that country but is now merely the normal reaction to the global crisis. Migrants from Honduras who go northward to the United States or migrants from West Africa who go towards Europe through Libya are part of this global exodus.

Step Nine: Who Controls the Narrative?

The monopoly corporate media takes its orders from the elite. There is no sympathy for the structural crisis faced by governments from Afghanistan to Venezuela. Those leaders who cave to Western pressure are given a free pass by the media. As long as they conduct ‘reforms’, they are safe. Those countries that argue against the ‘reforms’ are vulnerable to being attacked. Their leaders become ‘dictators’, their people hostages. A contested election in Bangladesh or in the Democratic Republic of Congo or in the United States is not cause for regime change. That special treatment is left for Venezuela.

Regime change operations begin when the imperialists question the legitimacy of the government in power: by putting the weight of the United States behind an unelected person, calling him the new president and creating a situation where the elected leader’s authority is undermined. The coup takes place when a powerful country decides – without an election – to anoint its own proxy. That person – in Venezuela’s case Juan Guaidó – rapidly has to make it clear that he will bend to the authority of the United States. His kitchen cabinet – made up of former government officials with intimate ties to the US (such as Harvard University’s Ricardo Hausmann and Carnegie’s Moisés Naím) – will make it clear that they want to privatise everything and sell out the Venezuelan people in the name of the Venezuelan people.

Venezuela has faced harsh US sanctions since 2014, when the US Congress started down this road. The next year, US President Barack Obama declared Venezuela a ‘threat to national security’. The economy started to scream. In recent days, the United States and the United Kingdom brazenly stole billions of dollars of Venezuelan money, placed the shackles of sanctions on its only revenue generating sector (oil) and watched the pain flood through the country. This is what the US did to Iran and this is what they did to Cuba. The UN says that the US sanctions on Cuba have cost the small island $130 billion. Venezuela lost $6 billion for the first year of Trump’s sanctions, since they began in August 2017. More is to be lost as the days unfold. No wonder that the United Nations Special Rapporteur Idriss Jazairy says that ‘sanctions which can lead to starvation and medical shortages are not the answer to the crisis in Venezuela’. He said that sanctions are ‘not a foundation for the peaceful settlement of disputes’. Further, Jazairy said, ‘I am especially concerned to hear reports that these sanctions are aimed at changing the government of Venezuela’. He called for ‘compassion’ for the people of Venezuela.

US National Security Advisor John Bolton held a yellow pad with the words 5,000 troops in Colombia written on it. These are US troops, already deployed in Venezuela’s neighbour. The US Southern Command is ready. They are egging on Colombia and Brazil to do their bit. As the coup climate is created, a nudge will be necessary. They will go to war.

None of this is inevitable. It was not inevitable to Titina Silá, a commander of the Partido Africano para a Independència da Guiné e Cabo Verde (PAIGC) who was murdered on 30 January 1973. She fought to free her country. It is not inevitable to the people of Venezuela, who continue to fight to defend their revolution. It is not inevitable to our friends at CodePink: Women for Peace, whose Medea Benjamin walked into a meeting of the Organisation of American States and said – No!

It is time to say No to regime change intervention. There is no middle ground.