Petulance as Statecraft: Trump Does Canada 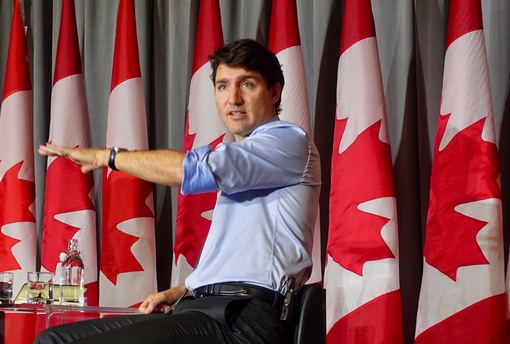 When it comes to Donald Trump, I tend to ignore his self-centered shenanigans. I figure the substance (when there is any) will become apparent later when his staff clarifies the mad king’s meaning. However, the recent series of events around the G-7 were something beyond the norm. This is especially true when one notes that John Bolton was by Trump’s side when the now infamous picture of him sitting across the table from much of the rest of the capitalist world with his arms folded and an angry look on his face was taken. The combination of Trump and Bolton is a dangerous one. Bolton’s demonic designs for world conquest have always been part of the neocon program, but other powers have held his most maniacal plans in check. Donald Trump is less likely to do so and John Bolton knows this. One can be sure he is already plotting how to start the next war.

The events before and at the recent G-7 summit were not surprising. Trump and his nationalist advisers live in a world where the US is and always will be the top dog. Their understanding of the nature of modern day capitalism is ill-informed at best and just plain ignorant at worst. The call for an America First policy is reflective of this ignorance. Besides its reference to a non-existent past when the United States pushed the rest of the world around unchallenged, Trump’s approach seems likely to lead to a severe economic depression or a war unlike any the world has ever seen. When one considers the devastation wars in the past century caused, that is quite an ominous possibility.

Whether Trump and his people like it or not, they cannot turn back the hands of time without destroying much more than the current system of trade. One cannot simply rebuild factories and give out good paying jobs in 2018; one cannot simply make housing affordable and let everyone who wants to buy a house buy one. This is especially the case if the entire effort at rebuilding is done through greater privatization. Today’s financiers are not interested in producing goods, they want quick and easy money made by buying and selling debt and speculating on the futures of the international working class. Even if factories are rebuilt, the wages paid to those working inside them will have to be competitive. In other words, they will not be wages that would get a working person out of debt. Instead, those workers would more than likely incur even greater debt, buying into the lie of a resurgent economy—a phenomenon that only the wealthy will truly benefit from. It is their banks, after all, that own the debt the rest of us carry. No matter what most workers make in salary, their debts are almost certainly greater. That’s not an accident, it’s the way modern capitalism is designed to work. Despite the near impossibility of returning the US economy to the early days of monopoly capitalism, Trump and his forces are trying to do just that. This is the meaning behind the tariffs and Trump’s crossed arms at the G-7.

While in Canada Trump also told his fellow capitalist leaders that the US was being robbed by them and their economies. This statement is interesting in that it ignores the post World War Two assumption of power by Washington and Wall Street. Despite the common understanding among US citizens that the postwar Marshall Plan was a generous gift by the US designed to rebuild the destroyed US economy, the real truth is that the Marshall Plan was a very successful effort by the US to put western European economies in the pocket of Wall Street. There was very little generosity involved, unless one considers the return of one’s wallet by the very person who picked your pocket to be generous. Since the US was also insistent on dominating those nations militarily, it spent a lot of money on occupying them. When the Soviet Union dissolved there was an impetus by some of those occupied nations of Europe to build up their militaries. This desire was met with varying degrees of resistance by Washington. Meanwhile, the European economy grew stronger as neoliberal capitalism became the norm around the world. Despite these changes, the US that continues to dominate the world militarily. Trump, like his predecessors, understands this. Unlike his predecessors, however, Trump is resisting the cooperation that has existed for decades between western Europe, Canada and the United States. Instead, he blames the failures of the US economy on its trading partners, changing the target of his accusations seemingly at whim. One week it is China, the next it is the G-7.

This inter-capitalist rivalry is not something new. However, the nature of Trump’s intensification of the rivalry is. Indeed, it is reminiscent of the years before World War One. Therein lies the danger. Trump’s bellicosity as represented by his words, actions and those he makes his advisers has created an undercurrent of unnecessary danger to trade relations around the world. History proves that when powerful nations refuse to negotiate while they build up their militaries, war becomes ever closer.

Subscribe to get CP+ exclusive content
May 17, 2022
Thomas Knapp
Crime Begets Crime, ICE Edition
John Feffer
No Victory Day: Dealing With Stalemates Across the Board
Thomas Irwin
The Case Against Parking Minimums
Kevin Martin
To End the Horror in Ukraine, Go Big, and Go Broad
Trust Network Convenors
Using Early Warning Data to Create Communities of Peace
May 16, 2022
David Rosen
The Buffalo Shooting and the Great Replacement
Patrick Cockburn
London and Washington are Being Propelled by Hubris – Just as Putin was
John Perry
The Summit of the Americas Could be Biden’s Next Foreign Policy Embarrassment
Sonali Kolhatkar
As the Planet Warms, Let’s Be Clear: We Are Sacrificing Lives for Profits
Ramzy Baroud
Ending ‘West’s Neocolonial Oppression’: On the New Language and Superstructures
Jeremy Corbyn
It’s Not Enough to Resist, We Have to Build, Too
Rosa Elizalde
The Heroes of Hotel Saratoga
Nick Licata
To Save Roe in Congress, the Democrats Must Change Their Strategy
Pete Tucker
The ‘Head Shot’: The Cases of Marilyn Mosby, Kwame Brown and Jack Evans Show the Dark Side of a Scary Prosecutorial Tool
John V. Walsh
NY Times Shifts Prowar Narrative, Documents Failure of U.S. in Ukraine
Chris Orlet
Should We Trust Corporate Science to Save the Planet?
Rogelio Mayta
Why ‘Bolivia is the Center of the World’ for People’s Movements
Urariano Mota
“In Search of Anselmo” and Soledad Barrett’s pregnancy
Pedro A. Noguera
Despite Decades of Effort, US Schools are Still Not Racially Integrated
Weekend Edition
May 13, 2022
Friday - Sunday
Henry Giroux
The War on Youth in the Age of Fascist Politics
Richard Falk
Ideological Silos of Left and Right: Missing the Point in Ukraine
Christoph Irmscher
An Artist Not in Uniform: How Walter Richter Defied Nazi Homophobia
Jeffrey St. Clair
Roaming Charges: Caught in a Classic Trap
Paul Street
Lawrence O’Donnell is Worried About Senate Apportionment
Eric Draitser
Russia’s Hunger Games
Eve Ottenberg
Fresh Off Russia, the U.S. Just Can’t Stop Provoking China
Stephen F. Eisenman
A Picturesque Tour of Toxic Waste Sites in Georgia and Alabama
Vijay Prashad
Mali’s Military Ejects France, But Faces Serious Challenges
Cole Harrison
$40 Billion War Fever Grips Congress as U.S. Escalates Ukraine War
Scott Parkin
Climate Hegemony: Now is the Time of Monsters
David Masciotra
“Something to Do with Paying Attention”: David Foster Wallace’s Final Work, the Public Good, and a “Wastoid” Nation
Alexandra Isfahani-Hammond
New York Court of Appeals to Consider Animal Personhood as COVID-19 Cases Rise
Michael Welton
Taking Aim At US Follies and Media Malpractices 2016: Stephen Cohen Takes on the Hawks
ANIS SHIVANI
A Look Back at Bigger Than Bernie: Can the Democratic Party Be Reformed From Within?
David Schultz
American Politics and the Lost Art of Toleration
Nina Burleigh
Did the Long Pandemic Spawn a New Kind of Repression?
Thomas Knapp
“Privacy”: Some Animals Are More Equal Than Others
John P. Ruehl
The Ukraine War is Accelerating the New Space Race
Mike Garrity
Making Hay: National Park Service Drains “Critical Habitat” From Bull Trout River
Jonathan Woodrow Martin
Palestinians are always the target
Kirkpatrick Sale
Limits to Growth: Where We Stand Today
David Yearsley
Slippery Slope
Red Goat Collective
21 Fallacies Feeding ‘Cancel Culture’ and Holding Back the Contemporary U.S. Left
Kim C. Domenico
Overthrowing Manufactured Inevitability, or, No Safe Way to Be Safe
Mitchell Zimmerman
The GOP’s “Pro-Life” Victory Will Mean More Dead Mothers