The charged words of an abandoned wife (and mother of two) cry out at her cad of a husband in the opening paragraph of Domenico Starnone’s devastating novel, Ties. The novel itself is short, the title even shorter, but the Italian novelist couldn’t be better served by Jhumpa Lahiri’s luminous translation of this absolutely disarming narrative. Ties is the kind of novel all serious readers dream about: a quick read, with unforgettable characters who tell themselves lies in order to justify their actions—in this case, divorce. What happens to the children? Will the kids be all right? Sure, they’ll be fine, go ahead, alleviate your genital itch. Leave your family for a much younger woman or man. Tell yourself again: the kids will be all right. Even if they won’t. Ties = lies.

This is what we read in that opening paragraph, from the wife’s point-of-view: “Dear Sir, let me remind you: I am your wife…. I know you pretend that I don’t exist, and that I never existed….you’re ashamed to say: look, I was married on October 11th, 1962, at twenty-two…. We’ve been married for twelve years…and we have two children: Sandro, born in 1965, and Anna, born in 1969. Do I need to show you their birth certificates to shake some sense into you?” And then a couple of pages later, one of the biggest lies in all divorces: “You wanted to make me realize that, by destroying the life we shared, you were in fact freeing me and the children, and that we should be grateful for your generosity. Oh, thank you, how kind of you. And you were offended because I threw you out of the house?”

He’s 34 and a university professor; she’s a couple of years older and a housewife. The children are thirteen and nine. “By walking away you’ve destroyed our life with you. You’ve destroyed how we once saw you, what we 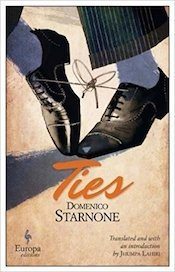 believed you were.” The young woman Aldo’s fallen for is nineteen. Doesn’t that tell it all? The abandoned wife is obviously bitter. She has few skills, other than parenting.

Aldo, by contrast, has all sorts of opportunities his wife does not have, especially after their divorce, which leaves her to deal with the children. She struggles; he does not, the classic syndrome of a women left to raise a family.

Part II opens with an abrupt shift to a much older couple in their seventies. Initially, he’s unnamed; her name is Vanda. They’re about to leave for a week at the beach, their summer vacation. Before they leave, they’re overcharged by a woman who delivers a package to them, and on the drive to the beach, he’s scammed by a man who professes to have known him in the past, possibly a student he’s forgotten about. Both incidents are unsettling, and as he later reflects on these events, “It was clear that people perceived, more clearly than I did, the unraveling of my defenses, and took advantage of it.” He realizes he’s old, vulnerable to quick-scam artists in a way he never was before.

Worse, when the two of them return to their apartment after the week at the beach, they discover that it’s in total shambles. Vandals have broken in and trashed everything in their attempt to take anything of value. Even more unsettling is the discovery that their cat is missing. It runs through Aldo’s mind that the cat has been stolen and they’ll be expected to pay a ransom to get it back. Yes, you read that correctly. The man is Aldo, who left his wife, Vanda, all those years ago, for a much younger woman, but obviously he later returned to her (and the children) and they’ve managed to survive well into their seventies. Starnone cleverly conceals the husband’s identity at the beginning of Part II, until the couple return home and discover that their apartment has been trashed. And the implication of Aldo’s return: the marriage was patched up and they all lived in harmony.

The story suddenly lurches into overdrive, as Vanda goes to bed and tries to sleep off the discovery of their vandalized apartment and Aldo discovers the letters she wrote him after he left her for the younger woman and trashed their marriage.  Their grown children, Sandro and Anna, are off-stage. They visited their parents’ apartment when they were at the beach, in order to feed the cat, but they left for their own vacations the day before their parents returned. So what remains is the chaos in the apartment and the missing cat, as Aldo reflects on his marriage all those years ago, his affair with the much younger woman, and the curious memory when he recalls teaching his son how to tie his shoes. Ties = lies.

Jhumpa Lahiri, in her introduction to Ties, states that Domenico Starnone approved the cover for the English edition of his novel. It’s a drawing of a pair of men’s shoes, at the bottom of two legs, with the laces tied together in such a fashion that the man is about to fall over. Lahiri writes in her appreciation for the work itself, “This novel reminds us that narrative refuses to stay put, and that the effort of telling stories only pins things down so far.” We believe that we have moved beyond our mistakes of the past, but then something happens (something minor, such as being overcharged a small amount; or returning home and discovering that everything we own has been tossed to the floor) and we are forced to confront those lapses we hoped we had forgotten, repressed.

Ties is a narrative gem. Obviously, I’ve withheld information from you—the explosive final section of the story—because you need to discover it yourself. But don’t be surprised if it forces you to reflect on your own relationships with your parents and your children (if you have any). Hopefully, it will prevent you from making errors of your own, from tripping over your own lives—all for the sake of your own gratification.