The Women Beside Bob Marley: Remembering the I Threes 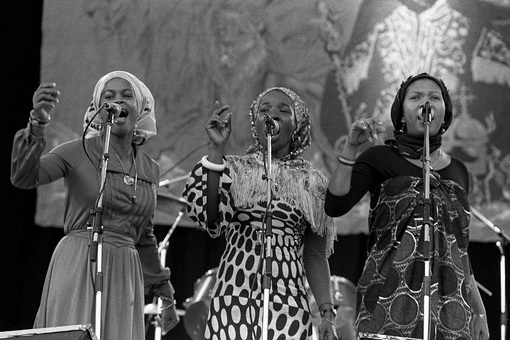 Robert Nesta “Bob” Marley came into existence on February 6, 1945. Marley, like Marcus Mosiah Garvey, hailed from Jamaica. While he traveled the small planet called Earth most of his life was spent on that Caribbean island.

I can remember General Gordon Baker Jr. leading demonstrations in Detroit in the late 1960s early 1970s chanting, “UAW means – You Ain’t White”. The UAW he was referring to was the United Auto Workers.

According to the Editor of the Pan African New Wire, Abayomi Azikiwe: “In 1965, Baker wrote an open letter to the draft board, refusing its request that he appear for an examination to determine his fitness to serve in the Vietnam War, a landmark in American draft resistance during that era.” Baker became one of the first people in the United States to resist the draft.

At the same moment in history, reggae icon Bob Marley was a member of the United Auto Workers Local 1183 in Wilmington, Delaware. Marley too got his greetings from Uncle Sam. Instead of going to Viet Nam he chose to return home to Jamaica. Christopher John Farley who wrote the volume, “Before The Legend: The Rise of Bob Marley” discusses Marley’s time at the point of production as an automobile factory worker.

Marley was a card-carrying member of the UAU

Says Farley, “He was a card-carrying member of the United Auto Workers’ Union. He had a job at the Chrysler Newark Assembly plant in Newark, Delaware; on South College Avenue…Bob usually worked the second shift. The experience would later inspire his song “Nightshift.”

The mid-sixties and early seventy were trying times for Bob and Rita Marley who were married on February 10, 1966 in a ceremony that took place in the office of the justice of the peace in Kingston, Jamaica.

Rita was born Alpharita Constantia Anderson July 25, 1946. Some accounts claim Rita was born in Cuba, however, her brother who lives in Southern Ontario says she was born in Jamaica. Farley mentions Rita birth place in his book. Says Farley: “Rita’s mother was Cuban; although numerous sources say Rita was also born in Cuba, she insists she is a native of Kingston.”

Years later when Peter Tosh (aka Wolde Semay)at and Neville O’Riley Livingston (aka Bunny Wailer) split off from Bob’s wing of the Wailers, Bob would bring in Rita along with Marcia Griffiths and Judy Mowatt, who gained recognition as the I Threes backing vocalists for Bob Marley and the Wailers.

Rita, Marcia and Judy were influenced by Mahalia Jackson

I was blessed to have interviewed Rita, Marcia and Judy. One of the things that struck me was that all three listed New Orleans, Louisiana born Mahalia Jackson as a major influence. It was not only the fact that Jackson was a great vocalist. They all told me separately they admired the fact that she was Dr. Martin Luther King Jr.’s musical lieutenant. They said she stood for truth and rights and social justice which impressed them all.

The second I Three, Marcia Llyneth Griffins (November 23, 1949) is a legendary Jamaican vocalist. Griffiths started her career in 1964, performing on stage with Byron Lee and the Dragonaires. She worked together with Bob Andy from 1970 to 1974 as a duo (Bob and Marcia).They did a reggae cover of Nina Simone’s “Young, Gifted and
Black” in 1971. Between 1974 and 1981 she was a member of the I Threes.

She continued to record as a solo artist throughout the 1970s, working with producers such as Sonia Pottinger, an unsung successful woman record executive. Pottinger (June 21, 1931 – November 3, 2010) is one of the most important Jamaican women involved in music business.

Griffith’s biggest selling recording was her remixed rendition of Bunny Wailer’s song “Electric Boogie” and it was this version that made the Electric Slide, a line dance, an international dance craze. “Electric Boogie” remains the highest-selling single by a female reggae singer of all time.

The third I Three, Mowatt, (born 1952 in Gordon Town, St Andrew Parish) is one of Jamaica’s greatest female reggae artists. She released “Black Woman” album in 1980 it is considered by many critics to be the greatest reggae album by a female artist. “Black Woman” was the first reggae album produced by a woman. Her album “Working Wonders” became the first album nominated for a Grammy Award in the category of reggae music in 1985.

In many ways women have been underestimated by the male-dominated recording industry. The white-male corporate executives have been comfortable with women sitting behind a piano and crooning.

Woman such as Sonia Pottinger, Rita Marley, Marcia Griffiths and Judy Mowatt have proved that as the classic song says, “It Ain’t Necessarily So.” They have proven themselves and stood toe-to-toe with the brothers in the industry.

This article originally appeared on BurningSpear.com.