The August jobs report was somewhat disappointing. The economy added only 235,000 jobs for the month, just 48,000 more than the 187,000 pre-pandemic monthly average under Trump. Seriously, most of us did expect more jobs (my number had been 500,000), but after two months where job growth averaged more than 1 million, some falloff should have been expected, even without the impact of the Delta variant.

Anyhow, it’s time to see how the economy’s job performance under Biden stacks up against its performance under Trump. As I always say, this is silly since there are so many things that are beyond the president’s control, so the comparison really is not telling us much. But, you know if the situation were reversed, Donald Trump would be touting this graph to the sky. He probably would even have a huge neon version on top of Trump Tower.

So, here’s where we stand now. Including the August number, and the 135,000 upward revision to growth for the prior two months, Biden has now created 4.5 million jobs in the first seven months of his presidency.  Trump lost 2.9 million jobs over his four years in office. 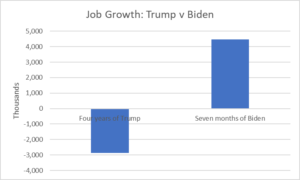