Grazing, Irrigation and Climate Change: the Uncertain Future of the Deschutes River 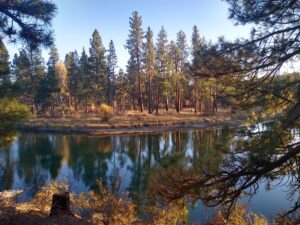 The U.S. Fish and Wildlife Service will soon decide whether to approve a Habitat Conservation Plan (HCP) for the Deschutes River Basin. The HCP was initiated by local irrigators and the city of Prineville who want to maintain their privilege of using the public’s water (all water in Oregon is owned by citizens) for their private profit.

Irrigation practices have severely altered the river’s natural flows. Historically, due to an abundance of springs, the Deschutes ran crystal clear as the Metolius or Fall rivers still do and had almost no variation in flow year-round. 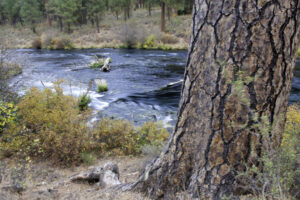 At one time the Deschutes River ran as clear and steady as the spring-fed Metolius River. Photo George Wuerthner.

Irrigation withdrawals have changed the river dramatically.  The Upper Deschutes River is essentially an irrigation canal that may drop as low as 100 CFS in winter and flood to 2000 CFS in summer. These radical changes in flow have contributed to the endangerment of Oregon spotted frog, as well as harmed other species like Bull trout. 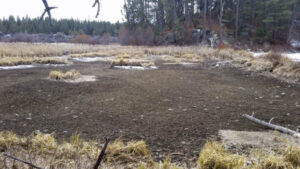 The Deschutes River in winter when water flow is turned off by irrigators. Photo George Wuerthner. 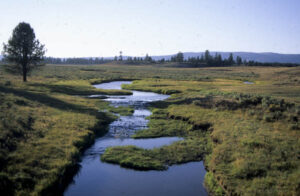 Irrigation dams, withdrawals, and pollution from Agriculture from the Crooked River into Lake Billy Chinook also have harm steelhead, chinook salmon and other aquatic species.

Unfortunately, most of the irrigated acreage grows low-value crops like hay and alfalfa used to feed livestock. 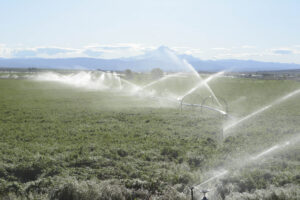 Sprinklers on hayfield allow for massive evaporation rates which will only increase with climate change. Photo George Wuerthner.

The HCP, if fully implemented, will likely increase water for the Upper Deschutes though it will take 30 years before the water improvements are fully implemented. Furthermore, the HCP will do little to improve water quality below Bend and on the Crooked River.

However, there are several assumptions in the HCP that deserve scrutiny.

First, full implementation of the HCP requires piping irrigation canals to reduce water losses due to seepage. The only problem with this plan is that it requires up to billion dollars of mostly taxpayer funds to execute and there is no guarantee the funding will materialize.

For comparison, the entire operation and maintenance budget to run all 567 US Fish and Wildlife Refuges like Hart Mountain NWR or Klamath Marsh NWR is $500 million.

What happens if taxpayers decide they would rather spend a billion dollars on something other than subsidizing the local Ag industry?

Another problem looming on the horizon is climate change. The best scenarios suggest that drought will become more common, and warming temperatures are likely to result in more winter rain as opposed to snow. Snow melts slowly and soaks into the ground water. Rain will run off quickly. So even if the amount of precipitation remains the same, the form that precipitation occurs will affect water flow in the river.

A further issue is that climate warming will not only change the form of precipitation, but it will increase evapotranspiration from plants. In other words, the same acreage of hay or alfalfa will require more water to compensate for greater water losses due to transpiration.

Warming climate also means the air’s ability to soak up water is increased. There will be much greater evaporation from large bodies of water—in other words, reservoirs. So shallow reservoirs like Wickiup will lose even more water to the atmosphere because of evaporation. 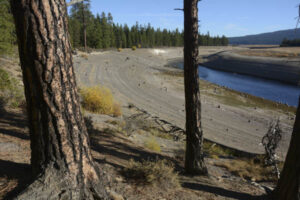 Wickiup Reservoir is drawn down every fall. Photo by George Wuerthner.

With population growth, there will be greater demands for domestic water use. Plus, the economy in Central Oregon is far more dependent on outdoor recreation like fishing, kayaking, and other water sports than agriculture. Invariability there will be greater competition for diminishing water sources.

Yet the HCP assumes that the past water supplies and historic flows will remain in the future. There is no effective mechanism to deal with a decline in water because of climate change.

It is important to keep in mind that the HCP was initiated and written primarily by the irrigation/ag industry. The prime beneficially of the plan (and taxpayer subsidies) will be Ag. Any improvements that benefit the river ecosystem are a secondary happy coincidence, not the dominant purposes of the HCP.