The Comeback of Manufacturing Jobs: MAGA Land and the Real World We know that Donald Trump has no interest in reality, but just in case anyone might be tempted to take his boasts about bringing back manufacturing jobs seriously, it is worth a quick visit to the actual numbers. In 2016 Trump focused his campaign on a series of Midwestern swing states that had been hard hit by the loss of manufacturing jobs due to trade. He insisted that he would bring back these jobs as a result of his great skills as a deal maker. He would negotiate new trade deals so that we would get back the jobs we had lost.

Let’s take a quick look at the picture as of January 2020. I’m deliberately ending the period before the pandemic began to have an impact on the economy. 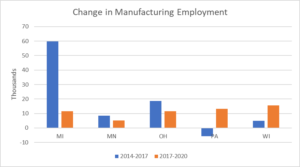 The basic story is that Trump may have rebuilt our manufacturing base and brought back the jobs lost to trade in his head, but he did not do it in the real world.