While much conservation and political attention have focused on whether to allow oil development in the Arctic National Wildlife Refuge, another project, the Ambler Mining Project, and road construction proposal may pose even greater threats to the Arctic’s wildlife and wildlands. Despite this threat, The Ambler project has thus far received far less attention from the media, politicians and conservation organizations.

The proposed 211-mile Ambler Road would connect the Dalton Highway (pipeline haul road) with the Ambler Mining District in the western Brooks Range. The ore belt that stretches for 200 miles contains copper, cobalt, lead, and zinc and could be one of the most valuable deposits in the world, especially as people turn to electric vehicles. 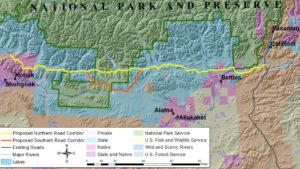 There is new interest in encouraging the US development of critical minerals and energy, and the Ambler Mining proposal benefits from this push for US sources of minerals.

Although these deposits have been well-known for decades, the cost of mining, smelting, and transportation has precluded development. (I knew about the ore deposits in the 1970s when I lived and worked along the Kobuk River).

Years ago, I taught a class on Alaskan Environmental Politics. I emphasized that Alaska has more oil, coal, minerals, and even forests than most other parts of the United States. Many of these resources remain undeveloped because of the harsh climate, remote locations, and lack of access.

There are, for instance, substantial forest resources in Southeast Alaska. Still, they cannot be cut and transported without government subsidies because it’s cheaper to log trees in Oregon or Washington. 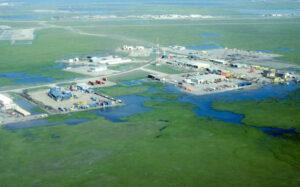 Prudhoe Bay was a world class oil reserve, but could only be developed once the Pipeline was constructed to get the oil to refineries via oil tankers from Valdez, Alaska. Photo George Wuerthner.

The Ambler Mineral deposits are considered “world-class.” Getting a road to the Ambler Deposits is the first step in making mining operations profitable. The Bureau of Land Managment (BLM) and the Corps of Engineers under the Trump Administration approved the road plan in 2020, and officials agreed to issue a 50-year right-of-way for the Alaska Industrial Development and Export Authority, the state public corporation working to develop the project.

However, the Biden Administration halted the road project while a Supplemental EIS process mandated by the courts was completed. However, my sources in Alaska suggest this may be for show. The comment period ended on November 4th, and the BLM review will likely be published sometime in the new year.

If you want to understand politics, all you have to do is follow the money.

The mining claims are owned mainly by local Iñupiat people living in NW Alaska coast and inland along the Kobuk River, represented by NANA corporation. They also operate the Red Dog Zinc mine, one of Alaska’s most significant mining and polluted sites.

In the case of the Ambler mines, NANA shareholders are likely to be employed during road construction and mining operations.

One study estimates that 20% of all construction jobs will be held by local villagers, providing significant money input into these rural villages. NANA corporate leaders likely believe they are working in the best interests of their constituency.

In addition to NANA and some residents who would benefit from jobs and royalty payments, the road is also supported by the state of Alaska. The Alaska Industrial Development and Export Authority (AIDEA) would own Ambler Road.

Opposition to the road comes from Tanana Chiefs and other Athabascan Indians living along the Koyukuk River and tributaries. The Athabascan would gain no advantage to a road except perhaps for more accessible and cheaper shipment of supplies. But they fear the road would disrupt subsistence hunting and gathering.

The Athabascans are not necessarily opposed to mining or oil development themselves. Doyon Native Corporation, which represents the Athabascan people of the Yukon Basin, during the land selection process of the Alaskan Native Claims Settlement Act has specifically targeted mineralized lands. Today, they have several active mining operations. However, Doyon has neither endorsed or opposed the Ambler Road and mining projects.

However, Doyon has proposed alternative road access  to the Ambler district from Nome.

So, in essence, the road is pitting one ethnic native group against another.

In addition to opposition from some native people, many conservationists also oppose the road. The Ambler Road, if built, would cross the Gates of the Arctic National Park and Preserve and numerous other protected areas like the Kobuk Wild and Scenic Rivers.

The National Park Service did an excellent review of the potential impacts of the road on wetlands, water quality, fish, wildlife, subsistence, and recreational impacts on the park that applies to the total road mileage.

Conservationists and native people opposed to the mine have produced a good videoabout how the road would impact the Arctic.

An environmental review by the BLM in 2020 found that the road would impact salmon, caribou, and other wildlife. 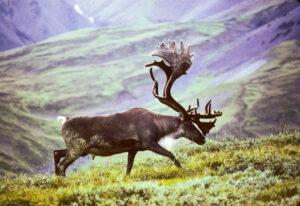 Caribou in the Brooks Range have been shown to avoid roads, and development of the Ambler Road may disrupt caribou migrations. Photo George Wuerthner.

Roads can be semi-permeable barriers, and although crossing such obstacles is possible, caribou may shift or entirely abandon their seasonal habitat. The disturbance and activity along the road and mining operations are likely to affect caribou in other ways. Studies have shown that caribou may travel up to 9.3 miles to avoid roads and 11.2 miles to avoid settlements.

The Western Arctic caribou herd is already in steep decline.

For instance, a study of the Native-owned Red Dog Mine Industrial Access road north of Kotzebue found that just four vehicles an hour affected the migration of 30% of collared caribou, or approximately 72,000 individuals of the 2017 population estimates.

Linear features like roads also are used by predators like wolves. This can increase predator influence on prey like caribou. Roads and seismic lines in Alberta have led to increased predation on woodland caribou.

It also does not take much imagination to see that this road will eventually be extended to the coast by Kotzebue, fragmenting the entire western Brooks Range’s ecosystems.

Nevertheless, the road’s construction was approved by the Trump administration. However, the Biden Administration has ordered the Bureau of Land Management to reevaluate the Environmental Review.

The BLM accepted comments until November 4th. Whether the BLM review changes the decision to move forward with the road remains to be seen.

But my sources in Alaska say that the Biden Administration is likely to approve the road to help Alaskan politicians, perhaps with stricter regulations designed to address environmental concerns. The Biden Administration doesn’t want to oppose new Democratic Congressional Representative Mary Petrola who is a supporter of the mine road. Murkowsi was critical to Democrats in voting to convict Donald Trump for his role in the Jan. 6th insurrection, was one of three GOP to vote for nomination of Judge Ketanji Brown Jackson  and she was the only GOP member to support the Voting Rights Bill. Biden does not want to alienate her potential support for other Democratic agenda votes.

I can’t emphasize enough that this road is one of the biggest threats to the Arctic’s wildlands and wildlife. It is bigger than just the development impacts that may result from the Ambler Mining operations. I have no doubts that the road, if built, will eventually make other mineral and oil, and gas sources economically viable to develop.