JPMorgan Chase is unique among the mega banks on Wall Street – and not in a good way. It owns the largest federally-insured bank in the United States despite a rap sheet that would make the Gambino crime family jealous. It has been charged by the U.S. Department of Justice with five felony counts since 2014, admitting to all of them. Its Board of Directors has left the same man, Jamie Dimon, at the helm of the bank as Chairman and CEO, throughout those five felony counts.

JPMorgan Chase is also the only American bank to ever be fined for using depositors’ money to gamble in derivatives in London and lose $6.2 billion of that money. (Jamie Dimon was Chairman and CEO at the bank then as well.)

JPMorgan Chase is the only federally-insured bank in the United States to be charged with two felony counts for helping to facilitate the largest Ponzi scheme in history – the Bernie Madoff looting of thousands of investors.

And despite this serial crime wave, the share price of its publicly-traded stock (ticker JPM) has somehow managed to behave like the most well-managed bank in America. Either Americans have no problem investing their life savings in a repeat felon or something untoward is going on here with the trading in this stock.

Since January 7, 2014, when the U.S. Department of Justice charged JPMorgan Chase with its first two felony counts for its role in the Madoff swindle, to its closing price yesterday, the share price of JPMorgan Chase has significantly outperformed the S&P 500 Index.

During this same span of time, JPMorgan Chase has been trading the shares of its own bank stock in its own Dark Pool. Dark Pools have little oversight by regulators and allow trades to occur without the bid or ask side of the trade being first exposed to “lit” markets, such as licensed stock exchanges. With the exception of Wells Fargo, all of the mega banks on Wall Street are operating their own Dark Pools. (The SEC refers to Dark Pools as ATS or Alternative Trading Systems.)

Wall Street’s chummy self-regulator, FINRA, decided to create the illusion of adding a little transparency to what is going on in Dark Pools in June of 2014. That’s when FINRA began to publish stale, three-week old trading data that was aggregated not by daily trading totals, but lumped together for an entire week, making it impossible for researchers to look for insider trading, front running and other share price manipulations. The first week for which Dark Pool trading data was released by FINRA was the week of May 12, 2014. FINRA released the data on June 2, 2014.

For the past seven years we have checked that FINRA data and witnessed JPMorgan Chase (as well as other banks) trading in the shares of their own bank stocks. We have repeatedly in the past asked the SEC to explain how this constitutes legal activity. We have yet to receive an answer.

In the most recent week reported by FINRA for Dark Pool trading, JPMorgan’s two Dark Pools traded a total of 518,277 shares of JPMorgan Chase stock in a total of 3,308 separate trades. As the chart below from FINRA data indicates, JPMorgan Chase’s own Dark Pool, JPM-X, was the third largest Dark Pool trader in the shares of its own stock for the week of August 2, 2021. In the four weeks from July 12 through the week of August 2, FINRA data shows that JPMorgan’s two Dark Pools made a total of 22,070 trades in its own stock.

JPMorgan’s federally-insured bank does not operate the Dark Pools. They are operated by another unit of the company, J.P. Morgan Securities LLC.

The Securities Exchange Act of 1934, which is still the law of the land, explains why it is a matter of national interest to protect U.S. markets from corruption by powerful players:

“Frequently the prices of securities on such exchanges and markets are susceptible to manipulation and control, and the dissemination of such prices gives rise to excessive speculation, resulting in sudden and unreasonable fluctuations in the prices of securities which (a) cause alternately unreasonable expansion and unreasonable contraction of the volume of credit available for trade, transportation, and industry in interstate commerce, (b) hinder the proper appraisal of the value of securities and thus prevent a fair calculation of taxes owing to the United States and to the several States by owners, buyers, and sellers of securities, and (c) prevent the fair valuation of collateral for bank loans and/or obstruct the effective operation of the national banking system and Federal Reserve System.

“National emergencies, which produce widespread unemployment and the dislocation of trade, transportation, and industry, and which burden interstate commerce and adversely affect the general welfare, are precipitated, intensified, and prolonged by manipulation and sudden and unreasonable fluctuations of security prices and by excessive speculation on such exchanges and markets, and to meet such emergencies the Federal Government is put to such great expense as to burden the national credit.”

The new Chair of the SEC, Gary Gensler, has promised to take a close look at Wall Street’s market structure. We can think of no better place to start than Wall Street’s Dark Pools. 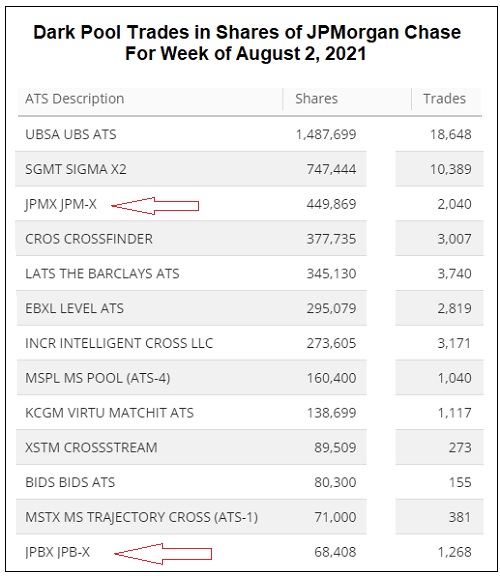