I don’t particularly care for music long on sentiment, short on talent, and the title of the track Jack sent, “Just Another Day in the Nam,” did not impress. But five seconds was all it took. Hear how Jack secretly sings each word with all his heart. See how he plays the guitar, works it, as if for the first time, the last time, again and again. The absence of sentiment, the understated hard won truths, the heart felt melody, all stick in the mind long after the last note has ebbed away.

Newly arrived to Delta 5/12 199th LIB, Jack’s first fire base was located in the Mekong Delta. As he started to talk to the men in his squad, he found them helpful, but they distant. He soon realized they didn’t want to get close—they’d lost too many friends. They told Jack to listen to the old timer’s, men who’d done months in the field—do what
they did, he’d survive.

That night Jack’s squad lay on the ground outside their bunker. Jack asked why no one slept inside. The grunts said there were huge rats in the bunker. Oh. Later that night Viet Cong hit the base with rockets.  Everyone but Jack ran for the bunker. Someone inside 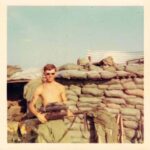 shouted, “Get in here!” Jack shouted back, “You told me there are rats in there!” The voice called out, “Get in here, you dumb ass! Would you rather get blown up or deal with rats?”

During Jack’s first three months Delta 5/12 traveled to different fire bases, sometimes on foot, or riding in Boston Whalers or air boats. Once, when Jack learned a man riding riding shotgun was short, he volunteered to take his place. When Jack got off the boat he hit a booby trap, was wounded in the face and legs. Five other men were also hit.  Jack spent two weeks at 3rd Army Field Hospital in Saigon and two at Cam Ranh Bay. He never volunteer for anything again.

Recuperated, Jack returned to Camp Frenzell-Jones, where he learned that Delta 5/12 would be sent to Fire Base Libby in Xuan Loc. Unlike the wide open Mekong rice paddies, there the terrain was triple canopy jungle. Instead of VC hard core NVA contested the 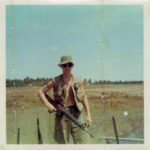 After the war, with a wife and two kids, Jack worked ten years at a Philly steel mill. When the mill shut down he took job at a Navy base, which he kept until retirement.

Jack left Vietnam in 1970 but the war lived on inside him. For years, to honor the KIA’s he’d known, each Memorial Day Jack visited The Wall in Washington, DC. He’d thought of writing a tune about combat and finally, twenty-five years after home coming, Jack picked up his guitar, plugged in his tape recorder, and quickly composed The Promise. A local recording studio polished the song, which aired a year later at The Wall. It remains a favorite among Vietnam veterans.

This essay first appeared in Medic in the Green.

Marc Levy was an infantry medic with the First Cavalry in Vietnam and Cambodia in 1970. His work has appeared in New Millennium Writings, Stone Canoe, Mudfish, Chiron Review, KGB Bar Lit Mag, and elsewhere.. His books are How Stevie Nearly Lost the War and Other Postwar Stories, and Dreams, Vietnam and Other Dreams. His website is Medic in the Green Time. Email: silverspartan@gmail.com