Some businesses make us feel all warm and cuddly. Like bakeries. Who can resist smiling just thinking about the smell of newly baked bread? But other businesses — like meatpacking — we do our best to ignore. Who wants to think about blood and guts and squealing pigs?

But think we must. Unsavory enterprises can reveal basic truths about our times we’d rather not consider.

Back in the early 20th century, for instance, a young writer forced Americans to confront inconvenient truth with a blockbuster novel about the meatpacking industry. Upton Sinclair’s The Jungle detailed slaughterhouse horrors that endangered workers and consumers alike. The resulting public outrage would inspire the legislation that created what became the federal Food and Drug Administration.

Meatpacking, Americans came to realize generations ago, needed government oversight. We could not trust the moguls who ran the industry to do the right thing. Indeed, we could not trust any moguls. Their business empires needed to be regulated and broken up, their incomes taxed, their power curtailed.

Over the past 50 years, Americans have unlearned all those lessons. Now we face meatpacking empires bigger than any Upton Sinclair ever contemplated. More powerful, too. Our modern-day emperors of meat, pork, and poultry now have enough might to imperil the lives of their workers with a president of the United States cheering them on.

President Donald Trump actually did more than cheer earlier this week. He issued an executive order that prevents state and local governments from shutting down meatpacking plants that are infecting workers  — and through them their neighbors — by the thousands.

Trump’s order came after meatpacking executives like Smithfield Foods CEO Kenneth Sullivan pronounced that slaughterhouse shutdowns are “pushing our country perilously close to the edge in terms of our meat supply.”

Some state officials have been reinforcing this impending-dinner-disaster line by threatening meatpacking workers inclined not to work in infectious environments. Iowa governor Kim Reynolds has announced that her state will be treating worried employees who don’t show up at operating plants as “voluntary quits” ineligible for unemployment benefits.

But most public officials in meatpacking-plant communities have, to their credit, been looking on with horror as coronavirus cases multiply. Industrial plants that process cows, hogs, and chicken, they realize, have become more dangerous than any other high-density sites in America save prisons. By April’s end, the United Food and Commercial Workers union reports, unsafe meatpacking worksites had left at least 20 workers dead and over 6,500 others infected.

The Trump administration doesn’t seem to see that infection rate as particularly concerning. The two federal agencies most responsible for protecting workers during pandemics, the Centers for Disease Control and Prevention and the Occupational Safety and Health Administration, have merely issued “guidance” on meatpacking and not required any specific serious steps to keep workers safe. The nation’s meatpacking empires can legally ignore the recommendations in the guidance.

Thanks to President Trump’s executive order, the meatpacking execs can essentially ignore lawsuits as well. Trump has now labeled their industry as “critical infrastructure” that must continue to operate. How can meatpackers be sued, their corporate attorneys can now argue, for endangering workers? The president made them do it.

Why this reckless rush to get all meatpacking operations up and running again? The rush has nothing to do with the “protein” that Smithfield Foods says the nation so desperately needs. The haste has everything to do with the rewards that meatpacking’s decision makers — the industry’s top executives — stand to lose if their plants close down or slow down for any appreciable amount of time.

And those rewards can be gargantuan. At Smithfield, for instance, the current CEO’s immediate predecessor grabbed $62.9 million in compensation his last two years on the job and then walked off with an $11.25-million retirement package. The current CEO, Kenneth Sullivan, hasn’t cleared windfall earnings that large yet. Sullivan only pulled down $14 million last year. But he knows full well that his millions won’t start multiplying if his assembly lines don’t run.

Reporters have done a solid job detailing how execs at Smithfield and the other meatpacking giants have consistently soft-pedaled the corona danger and failed repeatedly to put in place adequate protections for workers who labor in inherently high-risk workplaces.

“In many plants,” as one news report points out, “workers cut and debone meat in tight conditions, share meals in crowded cafeterias and walk the same narrow hallways, making social distancing practically impossible.”

Instead of addressing those dangers, the meatpacking industry has been blaming the spread of the coronavirus on their large immigrant workforce. Their “living circumstances” — so different from “your traditional American family” — are drivingthe pandemic problem, suggested one Smithfield spokesperson.

Smithfield executives might be crowding into tight apartments, too, if they were making as little money as many of their employees. Of the nation’s 194,000 frontline meatpacking workers, the Center for Economic and Policy Research notes, 45.1 percent live in households officially “low-income,” a designation that covers families of four making less than $52,400 a year.

Meatpacking workers need every dollar of their limited incomes. But they want safety even more. At many plants across the country, they’re responding to the industry’s back-to-work edicts with strikes and mass sickouts. These workers don’t have an easy road ahead. They face both the might of their giant employers and a hostile president of the United States.

“We only wish that this administration cared as much about the lives of working people as it does about meat, pork, and poultry products,” as Stuart Applebaum, president of the Retail, Wholesale, and Department Store Union, put it earlier this week.

Meatpacking workers over a century ago had things easier with their occupant of the White House. Theodore Roosevelt shared the public horror at Upton Sinclair’s vivid revelations in The Jungle. He ordered the outrages investigated. 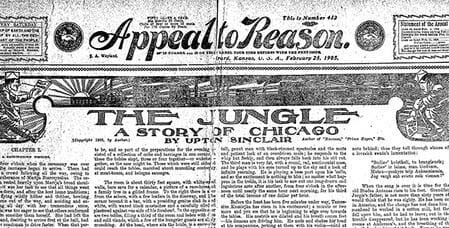 Sinclair’s best-selling book first appeared serialized in the Appeal to Reason, a socialist newspaper then considered the most widely circulated weekly in the entire United States. People of good will back then believed wholeheartedly that appealing to reason could bring justice for all.

That notion seems so quaint today. Those we let get rich exploiting others, we see ever more clearly, have reason aplenty not to engage with our appeals.