Since early last month when New York City mayor Bill deBlasio released his plan for a streetcar line along the East River waterfront connecting Brooklyn and Queens the proclaimed logic behind the plan has taken some subtle shifts. Originally billed as a doable project that would provide public transportation to an underserved area, the increasing booming waterfront- booming in an extremely gentrified sense of course encompassing areas like DUMBO, Williamsburg, the Brooklyn Navy Yard, and Astoria, though deBlasio did take pains to point out several public housing projects are in the vicinity of the proposed route, be cheaper than a new subway line with the $2.5 billion coming from future property taxes that planners envision from the increased waterfront development (the taxes would be used to pay off the initial bonds), and the project could be done without the MTA, therefore without involvement of the state and deBlasio’s arch-nemesis governor Andrew Cuomo.

One issue immediately presented itself: would riders of the streetcar be able to transfer to other subways and buses without paying an additional fare, a question particularly important for those living in the referenced housing projects not many of who work in increasing tech oriented DUMBO. Such a transfer option would in fact mean running smack into negotiations with the MTA. Perhaps an even more relevant objection, though one raised more by the local blogosphere than the city’s newspapers, is that there are plenty of regions in the city that have a greater claim to being underserved by public transit than East River waterfront. Needless to say these regions aren’t as chic. Many of these underserved areas, classified by having more than 26,000 residents per square mile and being more than a half mile from a subway stop are in poorer, minority neighborhoods (though some largely white communities in Queens have a similar claim) nowhere near the proposed streetcar. For his part, de Blasio has said if things go well on the waterfront it could serve as the model for similar experiments elsewhere in the city.

In the face of these objections, the idea of the streetcar as a cache tourist attraction, or least a means of transport for tourists, has also been floated. It’s true that the return of the streetcar has been in the ether for several years, pushed by such urban planners as Alexander Garvin. And who really could resist in a way? Streetcars, or trolleys, have a long history in New York. It’s a decent piece of trivia that before their treacherous move to Los Angeles the Dodgers’ original name (or one of them) was the ‘Trolley Dodgers’ named in honor of Brooklynites navigating 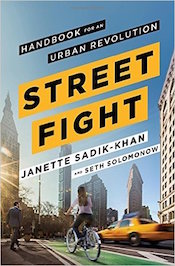 around the many trolleys that donned the borough’s streets. Many of the trolley systems in the country fell victim to the conspiracy of National City Lines (NCL) and its investors, including General Motors, Standard Oil, and Firestone, to motorize cities by buying up privately owned streetcar lines and replacing them with buses- National Lines was convicted in 1949 of conspiring to monopolize the sale of buses and related products to local transit companies controlled by NCL and other companies. The streetcars in Brooklyn lasted until the reign of Robert Moses and the worship of the automobile and suburbia. The last trolley in Brooklyn stopped operating in the fall of 1956, only weeks after the Dodgers played their last World Series as Brooklyn’s team.

The long, slow decline of the car in the city is a beautiful thing. Former New York City’s transportation commissioner under Michael Bloomberg, Janette Sadik-Khan is now touting her book Streetfight: Handbook for an Urban Revolution. Sadik-Khan is credited with creating 400 miles of new bike lanes, and the subsequent bike-sharing program in the city, as well as blocking off Times Square and Herald Square to traffic creating plazas in what were very busy streets. What would be a better symbol of urban enlightenment than a return of the greener streetcar?

While in theory noble one can look at a map of the bike lanes and also speculate that while perhaps not vectors of gentrification they are at least its compliment. It wasn’t long before it was pointed out that a streetcar line paid for by expected property tax revenues from the very developers and landlords who are expected to benefit from the project, given that the property taxes would be collected anyway, amounts to a subsidy for the said developers and landlords. And it isn’t difficult to find the financial muscle behind the lobbying for the proposed streetcar: The Friends of the Brooklyn Queens Connector, fronted by Jed Walentas, a principal Two Trees Management. Two Trees, besides having huge holdings in DUMBO (a neighborhood designation essentially created by the real estate industry), is developing 11 acres around the old Domino Sugar refinery in Williamsburg into a luxury enclave.

Other friends of the connector include the Durst Organization which is doing the same kind of thing on the Astoria waterfront with the 2400 unit luxury complex Hallas Point, and Andrew Kimball of Jamestown Properties, owner of Sunset Park’s Industrial City currently being transformed from a working class complex into a ‘specialized’ manufacturing hub. It helps even more if the developers have direct ties to City Hall (to begin with Two Trees donated $100,000 last year to a de Blasio boosting fund called the Campaign for One New York). A study published by the friends group was conducted by HR&A investors, a consulting group who count as former high-ranking employees First Deputy Mayor Anthony Shorris, City Planning Commissioner Carl Weisbrod, and New York City Housing Authority chairperson Shola Olatoye.

This should be taken back a step further. The Williamsburg waterfront was for decades a decrepit shell of its former self. For years community groups in Williamsburg and Greenpoint (one neighborhood over) organized to revitalize the waterfront eventually submitting plans under Section 197-a of the city charter that allows communities to submit plans for official approval. The plans called for a mix of low-to-mid-rise housing, long the basis for neighborhood housing, which would remain affordable to the local working class population. The plans were approved, with some changes, by the City Council around 2001. Tom Angotti, professor of Urban Planning at Hunter College and author of New York for Sale, described what came next:

Ever since the City Council voted for the Greenpoint and Williamsburg, in 2001, they have failed to lift a finger to implement them. City agencies went into hiding. There were no budget requests to create public access on the waterfront, no initiatives to preserve industry, and no new housing. Instead the city turned the other way as developers illegally converted industrial properties to unaffordable lofts, and did little to stop the legal conversions.

Instead what came a few years later was a massive rezoning that would create vast developer wealth with the stroke of a pen and reform the waterfront into a luxury product. The community was able to get some concessions on affordable housing- often not binding during the Bloomberg years and just as often beyond working class wages. A streetcar through the region is better seen as a cherry on top for exclusive redevelopment.

It’s a nasty irony that de Blasio made his streetcar pitch public only weeks before the Port Authority opened its WTC station, the $4.4 billion Oculus. Designed by Santiago Calatrava and conceived in post 9/11 narcissism (though thankfully the rebuilt WTC 1 tower’s original intended moniker ‘Freedom Tower’ hasn’t widely caught on), this boondoggle came in a decade late and almost triple the initial cost estimate. While visually appealing, at least from the inside, the $4 plus billion went for a station that will serve fewer than 50,000 daily riders (for perspective consider that Penn Station, long a dump buried under Madison Square Garden, serves 650,000 a day).

It harkens back to the original World Trade Center. For the infantile idea that the 9/11 attacks were somehow an attack on ‘capitalism’, the World Trade Center site has always been owned by the Port Authority of New York and New Jersey, a joint state controlled and subsidized venture that operates the ports, the Holland and Lincoln Tunnels, and the George Washington Bridge, as well as running the city’s two main airports (the Authority pays the city rent for the airports). The towers were built under the influence of the Rockefeller brothers (Nelson was governor, David was CEO of Chase Manhattan Bank) who sought to increase the value of their downtown holdings. The most immediate results were the orchestrated transfer of the primary port to New Jersey, an accomplishment longed for by elite planners since the late 1920s, and the destruction of 30,000 manufacturing jobs along Radio Row. It was state directed deindustrialization. For much of their history the towers were full of unprofitable state agencies and were a drain city’s coffers. By 1979 the World Trade Center cost $700 million in lost real estate taxes.

It has been said that real estate is to New York what oil is to Texas. If seems that’s a true as ever and so New York remains a city with distorted priorities and great inequality.