“We Kept Looking for a Hospital Bed”: the Public Healthcare Crisis in Uttar Pradesh

She starts to speak, but stops midway. Drawing a deep breath, she tries again. But her voice quivers. She looks down, and her chin wobbles. Anita Singh has been putting up a brave front for nearly a year. But the memory of her husband is overwhelming. “Ours was a happy little family,” says Anita, 33. “My husband was our anchor.”

Anita’s husband, 42-year-old Jaikarn Singh, was a teacher in a primary school in Lakhaoti village, 20 kilometres from Bulandshahr city in Uttar Pradesh. He started showing symptoms of Covid-19 in the first week of April 2021. “He had a cough, a cold and fever,” says Anita when we meet at her home in the city. “The teachers had been asked to go to their school even when the second wave was raging. He must have caught the infection on one of those days.”

On April 20, 2021, Jaikarn tested positive for the coronavirus. When he started gasping for breath, there was no oxygen bed available in any of the hospitals in the city. “I pleaded at several hospitals, but they just said no,” recalls Anita. “We made many phone calls because his health was deteriorating rapidly. But nothing helped. We had to treat him at home.”

A local doctor treated Jaikarn for the fever and cough. Anita’s relatives arranged an oxygen cylinder somehow. “We didn’t even know how to use it. We had to figure it out on our own,” she says. “But we kept looking for a hospital bed.”

The pandemic exposed the extent of India’s crumbling public health infrastructure, especially in the villages and small towns. Considering the country’s public expenditure on health has only been 1.02 per cent of the GDP (in 2015-16), there isn’t much for people to depend on. According to the National Health Profile 2017 , there was one government allopathic doctor for 10,189 persons in the country, and only one public hospital for every 90,343 people. 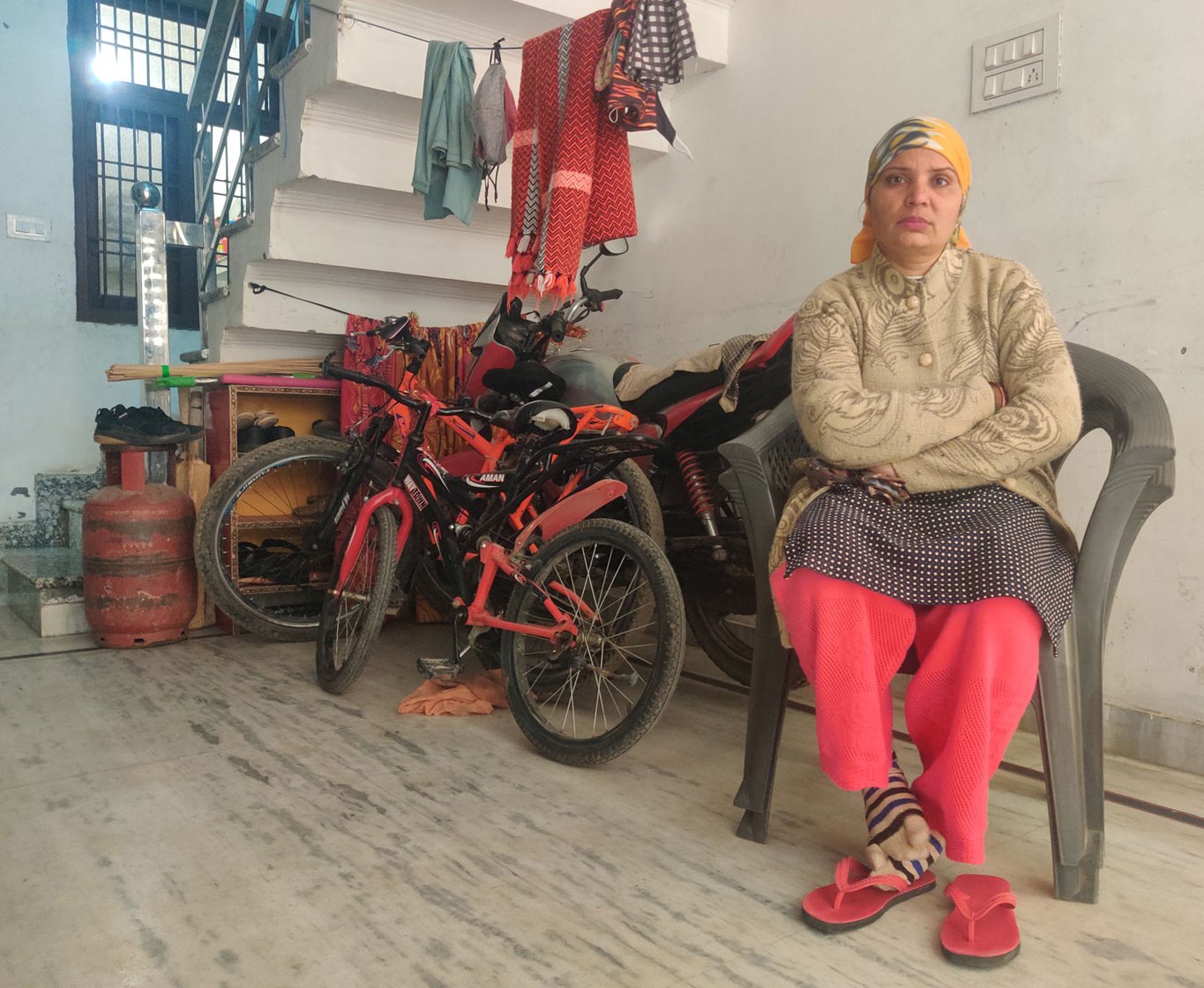 Anita Singh in her home in Bulandshahr city. She has been putting up a brave front since her husband’s death in 2021. Photo: Parth M.N.

Anita’s search for a bed ended with Jaikarn’s death. He died gasping for breath on April 26, 2021. He was to go for poll duty two days later. The state government had gone ahead with the panchayat elections even though the pandemic was at a peak.

Others who went on the compulsory duty in UP’s panchayat elections (April 15-29, 2021) paid a heavy price. By mid-May, at least 1,621 schoolteachers had died of Covid-19 or ‘Covid-like’ symptoms.

The state government announced compensation of Rs. 30 lakhs for each of their families. But Anita did not receive any of it because Jaikarn died two days before he was to go on duty. “It is unfair,” she says, and breaks down. “He was an honest government servant. And this is what we get in return. How will I look after my children? I want to do right by them. But you can’t do anything without money.”

Jaikarn’s monthly salary was Rs. 70,000. He was the family’s sole earning member. After his death, Anita got a job on compassionate grounds at a primary school in Bulandshahr city. “My salary is Rs. 20,000,” she says. Her daughter Anjali and son Bhaskar, 7 and 10 years old, have not been going to school since Jaikarn’s death. “I am struggling to run the household,” Anita says.

According to Inequality Kills , an Oxfam International report released in January 2022, 84 per cent of households in India saw their income decline in their income in the beginning of the pandemic. In March 2021, a study published by the US-based Pew Research Center noted that the middle class in India shrunk by about 32 million in 2020, while the number of poor people (with incomes of $2 or less a day) was estimated to have increased by 75 million.

Job losses triggered by the sudden nationwide Covid lockdown in March 2020, along with the weak health infrastructure led to a steep fall in the purchasing power of households across the country. And when public health facilities were overloaded with Covid-19 cases, many families had to turn to private healthcare even though it was unaffordable.

Rekha Devi’s family was one of them. In April 2021, her sister-in-law Sarita, 24, was admitted to the Banaras Hindu University’s hospital in Varanasi. But when she didn’t receive proper treatment there, Rekha got her discharged from there. “People were dying all around us,” says 36-year-old Rekha, sitting outside her hut in Chandauli district’s Tendua village. “Sarita didn’t have Covid. But her stomach pain was not going away. No doctor would pay any attention to her because of the number of patients at the hospital. She just kept lying on the bed without any idea of what was happening.”

Sarita had been ill for a week before being taken to the BHU hospital, a public facility. Her husband Gautam, 26, had first taken her to a private hospital in Sonbhadra town, where they live. It is about 30 kilometres from Tendua in Chandauli’s Naugarh block. “That hospital admitted her for a day, charged Rs. 12,000 and said she needed to be moved somewhere else for further treatment,” says Rekha. “Gautam refused to do that. The hospital said she could die anytime. So he got scared and brought her to me. We immediately went to BHU.”

The Varanasi hospital is about 90 kilometres from Tendua. Gautam and Rekha hired a vehicle for Rs. 6,500 to travel there. After discharging Sarita from the BHU hospital, they took her to Chakia town, which falls between Varanasi and Naugarh block. That journey cost them Rs. 3,500. “A private hospital in Chakia admitted her and treated her for a week, and she recovered from her illness,” says Rekha, who still doesn’t know what it was other than a ‘stomach ache.’ “But her medical expenses came up to one lakh rupees.”

Rekha and her relatives belong to the Jatav community, a Scheduled Caste in Uttar Pradesh. She works as an agricultural labourer, earning Rs. 200 a day. Gautam works in stone mines in Sonbhadra, and earns Rs. 250 a day. “He rarely gets work since the lockdown [of March 2020],” says Rekha. “We had no income for months.” The situation was so bad, she says, that he worked covertly in the mines during the lockdowns, flouting the rules. “We mainly survived on the free ration given by the government and local NGOs. We did not expect Sarita’s illness to cost so much.”

A survey report by Oxfam India released in November 2021, Securing Rights of Patients in India , found out that 61.47 per cent of the 472 respondents from UP were not provided with an estimated cost of treatment. Across the country, 58 per cent of 3,890 respondents had the same experience, which is a breach of patients’ rights. According to the 17-point Charter of Patients’ Rights drawn up by the National Human Rights Commission, a patient and their caregivers “have the right to information on the rates to be charged by the hospital for each type of service.”

Rekha was forced to pawn about a third of her two-acre farmland, and some jewellery, to raise funds for Sarita’s medical expenses. “The  moneylender is charging us an interest rate of 10 per cent month,” she says. “So we are only repaying the interest, while the principal amount [Rs. 50,000] remains. I wonder when we will be able to get rid of our debt.” 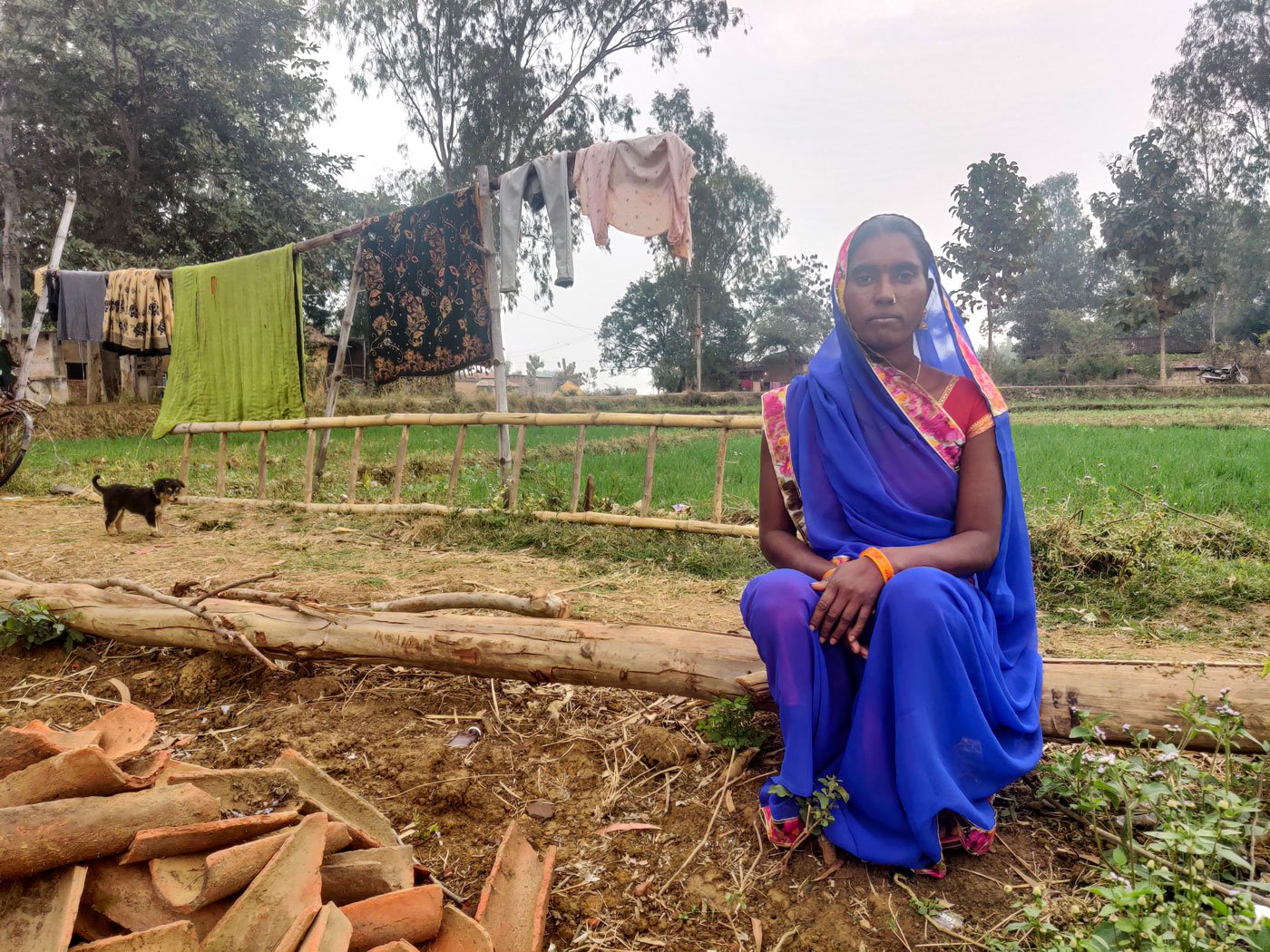 Rekha at her farm in Chandauli district’s Tendua village. She has pawned a portion of the land to pay the private-hospital bills. Photo: Parth M.N.

In many of UP’s villages people’s debt grew by 83 per cent in the first three months of the pandemic (April to June 2020). The data was gathered from nine districts through asurvey by COLLECT, a collective of grassroots organisations. It found that in July-September and October-December 2020, the increase in indebtedness was 87 and 80 per cent respectively.

A small farmer with just under an acre of land in Ghazipur district’s Jalalabad village, Mustakeem suffered a paralysis stroke days before the outbreak of Covid-19 in March 2020. It weakened his left side, forcing him to walk with a limp. “I need a stick to walk around. But I can barely hold it properly with my left hand,” he says.

No longer able to work in his farmland, he couldn’t hope to do any labour work either. “It made me totally dependent on the thousand-rupee pension I get from the state for being a senior citizen,” says Mustakeem. “In my condition, nobody would lend me money because they knew I can’t earn at all to repay them.”  There was no other funding to fall back on. According to the National Health Profile 2020 , 99.5 per cent of people in rural UP are not covered by any form of health insurance or support for health expenditure.

So when Mustakeem’s 55-year-old wife Sairun also had a stroke – he suspects it was a brain stroke – he could not do much to get her treated. “She had a stroke and fell down. It damaged her spine,” he says. That was in April 2020, and the pandemic had just started spreading in the country. “I took her to a government hospital in Azamgarh, but it had been converted to a Covid centre.” 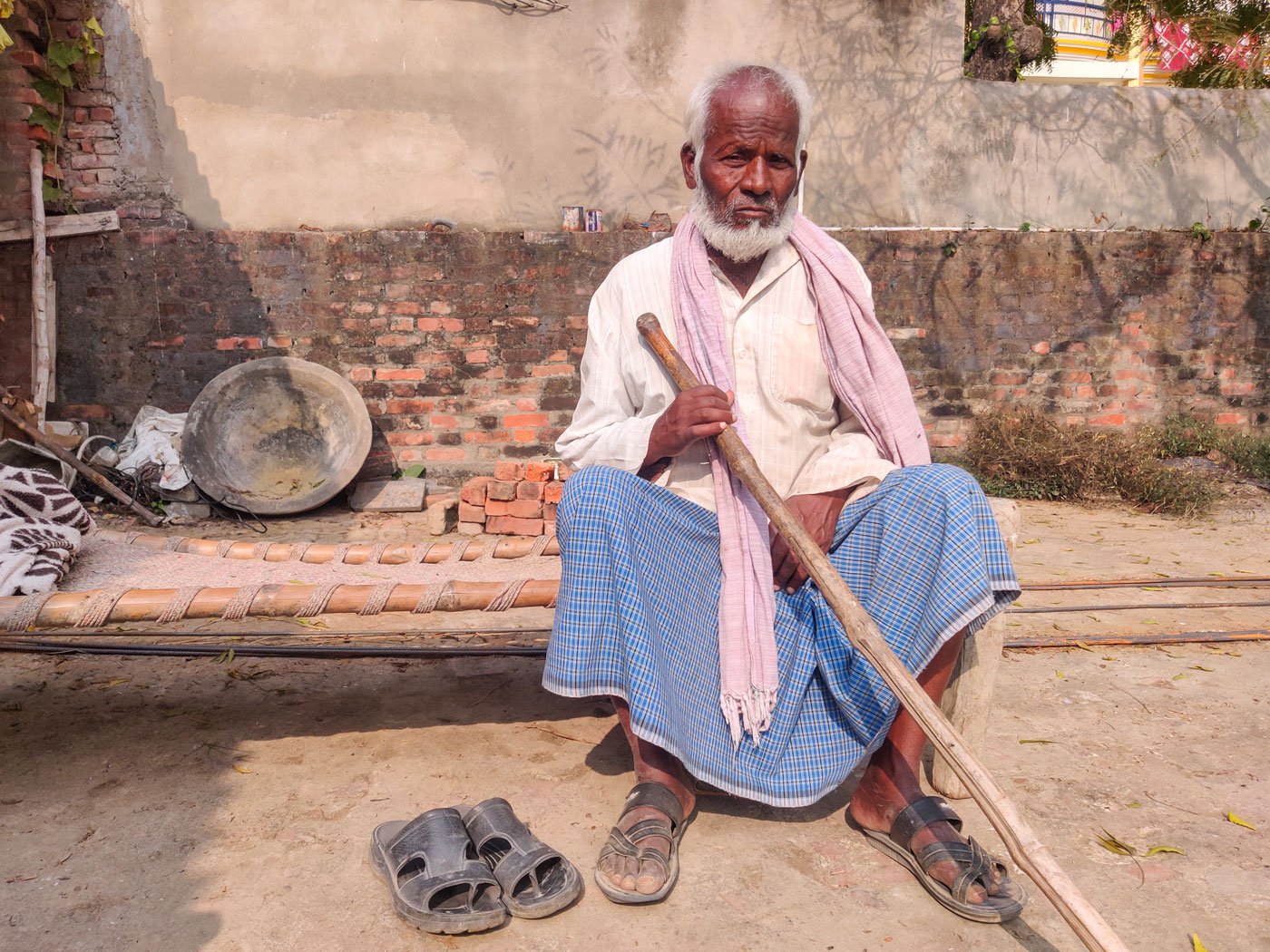 Mustakeem Shaikh in his village in Ghazipur district. Since his stroke, the farmer has been completely dependent on state pension. Photo: Parth M.N.

The Azamgarh hospital was 30 kilometres away. It cost him Rs. 3,000 to get there in a private vehicle. “We would have had to go to Varanasi because the Ghazipur government hospital does not have any facilities,” he says. “It would have cost me more money in travel [to Varanasi]. I didn’t have it. I asked my friends about private hospitals, but I realised I would not be able to manage the medical expenses.”

Mustakeem brought Sairun back home to their village in Jakhania block, and decided to get her treated locally. “She also said it would be the wise thing to do,” he adds. “Thejhola chaap doctor in the village gave her medicines.”

People rely on jhola chaap ‘doctors’, the village quacks, more than they do on government doctors. “The jhola chaap treat us with respect and answer our questions,” says Mustakeem. “They were there for us when other doctors were afraid to come near us.” But jhola chaaps are untrained medical practitioners.

In October 2020, about six months after her stroke, Sairun died in their one-room hut for want of proper treatment. Mustakeem has come to terms with it. “Those who died in the hospitals died amidst chaos,” he says. “My wife’s death was much more peaceful than that.”