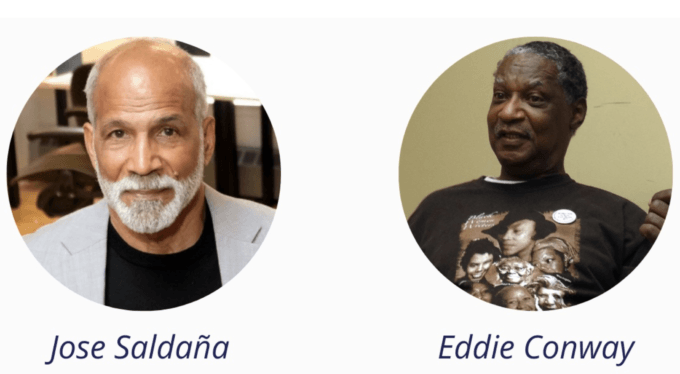 Why do prison abolitionists argue that people who spend years behind bars are exactly the ones we need out in the world to help mend our broken communities? The answer starts to emerge when you listen to Eddie Conway and Jose Saldaña. Eddie was Lieutenant of Security for Baltimore’s Black Panther Party when he was sentenced to life plus 30 years. He spent 44 years in Maryland prisons, was released in 2014, and now reports for The Real News Network. Jose was in the NYC Young Lords Party when he was sentenced to 25 years to life. He was paroled after 38 years in New York prisons, and now leads Release Aging People in Prison/RAPP, which works to change state policies that incarcerate thousands of people – mostly Black and Brown – for decades. Jose and Edie spent most of their lives locked up, and survived largely by mentoring men inside, based on what they’d learned in the Panthers and Young Lords. What follows is a virtual haiku of their 90-minute online conversation that I moderated for RAPP on October 28. I began by asking them what it was like to face a life sentence as a politically aware person.

Jose Saldaña: I was a street-corner drug dealer. That was my identity and my future. That corner was the only way out of conditions I inherited at birth. As a first-generation Puerto Rican, I’m in New York, a high school dropout, experiencing all kinds of discrimination.

When the Young Lords came on the scene, they changed my life, totally. They gave me an identity of who I was that connected to a history of resistance to colonial oppression. Before that my heroes was big-time drug dealers. Now my heroes became people like Doña Lolita Lebron who were willing to sacrifice their lives for the Puerto Rican people. This is what I entered prison with.

I had a life sentence; I knew I may never get out, so I continued to educate myself. Even if I didn’t get out, I was going to make a contribution to this movement from inside prison.

Eddie Conway: My story is similar. I was in the army. Matter of fact, I was on my way to Vietnam when the light came on and I realized that there was tanks in Newark, NJ, on the street, pointing 50-caliber machine guns at Black women. So I came back to America and it became clear that the Black Panther Party was the organization we needed to get changes.

When I entered prison I was convinced I would survive and come back out – and that I would survive this ordeal out in America, too. What fortified me was the righteousness of the struggle to change things. So from day one, I went in fighting. Forty-three years and 11 months later, when I stepped out, I was still fighting.

JS: We all wore green in New York prison, all subjected to the same degrading disregard for our humanity. We were insulted in just about every way possible, 24-7. Even our families were subjected to some of this. Everybody understood that racism dominated this system but most of us couldn’t articulate it to the point where we could have full, head-on discussions.

So dealing with conditions gave me an in, trying to empower and help each other. And we had help – one of the movements that evolved from NY prisons was the Resurrection Study Group. It was founded by incarcerated men, including former Panther Eddie Ellis, and was like what the Young Lords and the Panthers were in the streets.

SD: What did you study?

JS: The history of resistance, for one. But resistance didn’t stop at learning who our enemy is. It also encouraged a moral commitment to return to our communities and repair the harm we’d done there. This was so important. You cannot be a leader if you haven’t acknowledged that you’ve harmed someone. And people started to realize that this was a part of their development.

EC: That’s absolutely true. We were about changing the harm that most people had engaged in. We recognized the history of oppression and tried to change that. It’s almost the same experience you had, Jose. I just came to it in a different direction.

When I stepped into the prison system, I was determined not to work with prisoners – I was gonna spend my time freeing myself. But the first day I got there, I realized everybody was treated like animals. I wasn’t going for that. So we started political education classes and organizing. We had a group – about 100 of us in the beginning – that ended up becoming the Maryland Penitentiary Intercommunal Survival Committee. The Black Panther Party was closed for memberships at the time, so we had to name it something else. And that spread to other prisons in the state.

SD: What books did you read?

JS: I did so much reading. Das Kapital, Chairman Mao, Wretched of the Earth, Kahlil Gibran, Kwame Nkrumah. But the book I used more than anything was the prison letters of George Jackson [Soledad Brother]. Because I understood that the people I was trying to empower had a certain way of thinking that the Young Lords rescued me from: being a person who will resort to violence against my own. That’s how most of my peers survived. So we addressed that survival mechanism by redefining concepts like loyalty, courage.

I told them this story. I had a codefendant. He was more than a brother to me; he was my number one brother. He was arrested before I was, when I was in hiding. And the police, they hung him from a roof by his ankles. His wife was there, she told me about it weeks later. They hung him from the roof, saying, “Tell us where Jose is!” He says, “You want to know? OK, I’ll tell you.”

They bring him up a little so they could hear him say where I’m hiding – because he did know. But he yelled at the top of his lungs, “F-U, pigs! Drop me.”

All these guys look around. They say, “That’s gangster.” I say, “No, that’s not gangster. That’s love, man.”

That’s love and loyalty. Not just to each other, but to a principle greater than all of us in this room. This is how I would try to educate them, bringing them into a movement that’s greater than themselves. Because this is about liberation for people that have been enslaved for hundreds of years.

EC: Well, we built a library, is what we did. We took two cells and lined the walls with books. We had everything in there from The Black Book to The Green Book. But mainly what helped us was Malcolm X’s autobiography and Soledad Brother. They were what prisoners with no consciousness at all was willing to work through.

I did a number of programs. The last one was Say Their Own Words, which brought together 100 prisoners and speakers from around the country. It was a college level, interactive program. At the end of that program, they shipped us all around the state, so we wouldn’t continue it. Of course, when we got to other prisons, we polluted that population also.

We ended up building something called Friend of a Friend, which was an official mentoring program focusing on skills that members of street organizations needed to negotiate with each other. The last prison I was in, every week, somebody would be murdered. And after three or four years of Friend of a Friend, it was down to two murders a year.

JS: We need to recognize that mass incarceration is a reality for literally hundreds of thousands of families in our communities. This is the legacy of racism, which dominates this criminal legal system. This is where mass incarceration came from – imprisoning or actually murdering grassroots community leaders, and imprisoning the communities that support them. What do we do about it?

EC: I was in prison with fathers, grandfathers, grandchildren. That’s generations of people – that’s genocide. But honestly, I wouldn’t let everybody out. Some people might need to be incarcerated. I’ve come in contact with some serious sociopaths. They preyed upon young boys in particular. I’ve been almost forced to kill some of them, trying to protect young men. So Jose, I’m gonna be honest with you. There are some people I wouldn’t let out.

JS: I’ve met a few like that. But I don’t think laws should be made based on that few. And I notice that when they’re released, after maybe 40 years, they’re committed – a civil commitment – to an institution. The state recognizes there is something terribly wrong with them. But it doesn’t actually treat them until after they get 40 or 50 years out of them. This is why I say that prisons should not be for anyone. Because if they create that law to imprison one sick person, they will imprison others. And those others are going to be us.

EC: You know, Jose, you’re absolutely right. They need treatment. Prisons don’t do anything for them, except let them feed on the young innocent population.

SD: Jose, you had four kids when you went to prison. Eddie, you had two. Did your mentoring have anything to do with your kids you weren’t allowed to parent?

JS: It’s extremely difficult to be a good dad when you’re doing a life sentence. I realized that I failed as a father. A dad doesn’t want to admit that. My daughter once told me that I wasn’t there for her. So I tried to make up for it by helping these younger kids, to really help them. It helped me keep going…

EC: Probably my major regret is, before I went to prison, I was so caught up in making the world a better place for everybody that I actually lost my family. I didn’t take the personal time to make the world better for my son or my wife. I got a chance to make up some of it with the counseling programs.

That’s something I counsel everybody now. No matter what you’re doing, pay attention to raising your children. Don’t sacrifice everything for your politics. Politics are important, but this is a long, long-term fight.