India’s Farm Crisis: “They Sell Our Wheat to Us at Thrice the Price”

Laxmibai Kale has been losing a portion of her harvest every year. That’s not been due to excessive rainfall or drought or poor farming techniques. “Our crops are destroyed,” said 60-year-old Laxmibai, “because thepanchayat allows animals to graze on the land. I’ve lost count of the losses we’ve suffered.”

The five-acre plot in Mohadi village in Nashik district that Laxmibai and her husband, Waman, have been cultivating for three decades is a part of the gairan – government-controlled village commons used as pasture land. They grow tur , bajra , jowar and paddy there. “The panchayat members say they will file a case against us if we don’t allow the villagers to graze their cattle on our land,” she said.

Laxmibai and other farmers from her village in Dindori taluka have been fighting for their land rights since 1992. “I am the third generation [of the family] tilling this land, but we still don’t own it,” she said. “In 2002, we did a satyagraha and a jail bharo andolan for our land rights.” At that time, she recalls, nearly 1,500 farmers, most of them women, spent 17 days in the Nashik Central Jail.

With no land title, Laxmibai, who belongs to the Lohar caste – listed as an Other Backward Class in Maharashtra, has no help in dealing with the loss of crop. “Since the land is not in our name, we don’t get [crop] loans or insurance,” she said. She instead absorbs the losses by working as an agricultural labourer, doing two eight-hour shifts in a day sometimes to earn more.

Vijabai Gangurde, 55, a Bhil Adivasi farmer and a widow, is in a similar situation. She cannot live off her land in Mohadi. “After working eight hours on my two acres of land, I then work as a farm labourer for another eight hours [on someone else’s land],” said Vijabai, whose days are split into two shifts, starting at 7 a.m.

“But I never seek loans from a moneylender,” she added. “Moneylenders charge 10 rupees interest on every 100 rupees they loan, which has to be repaid by the end of the month.” Laxmibai too keeps away from private creditors. “Moneylenders have harassed widows in the nearby villages,” she said. 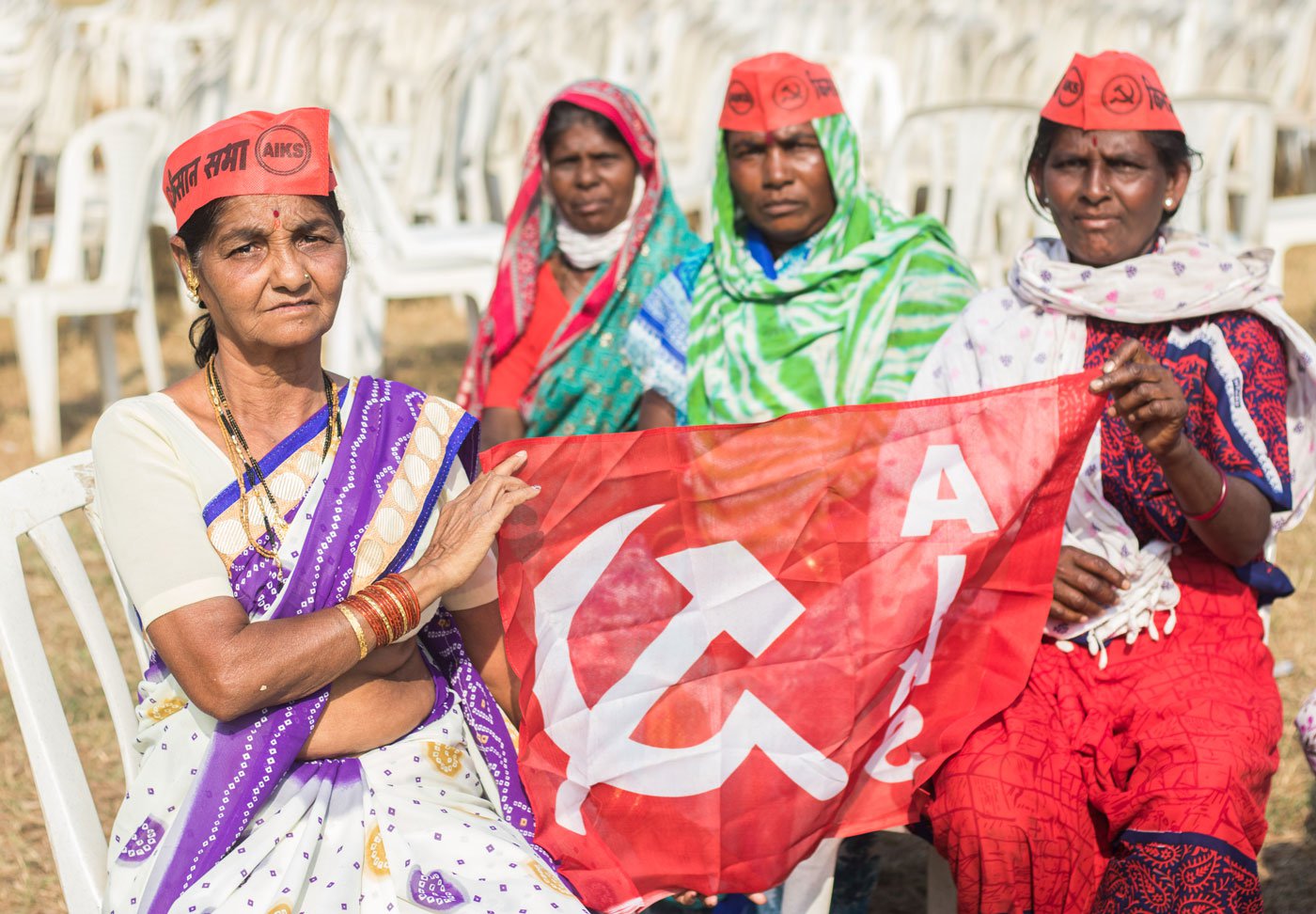 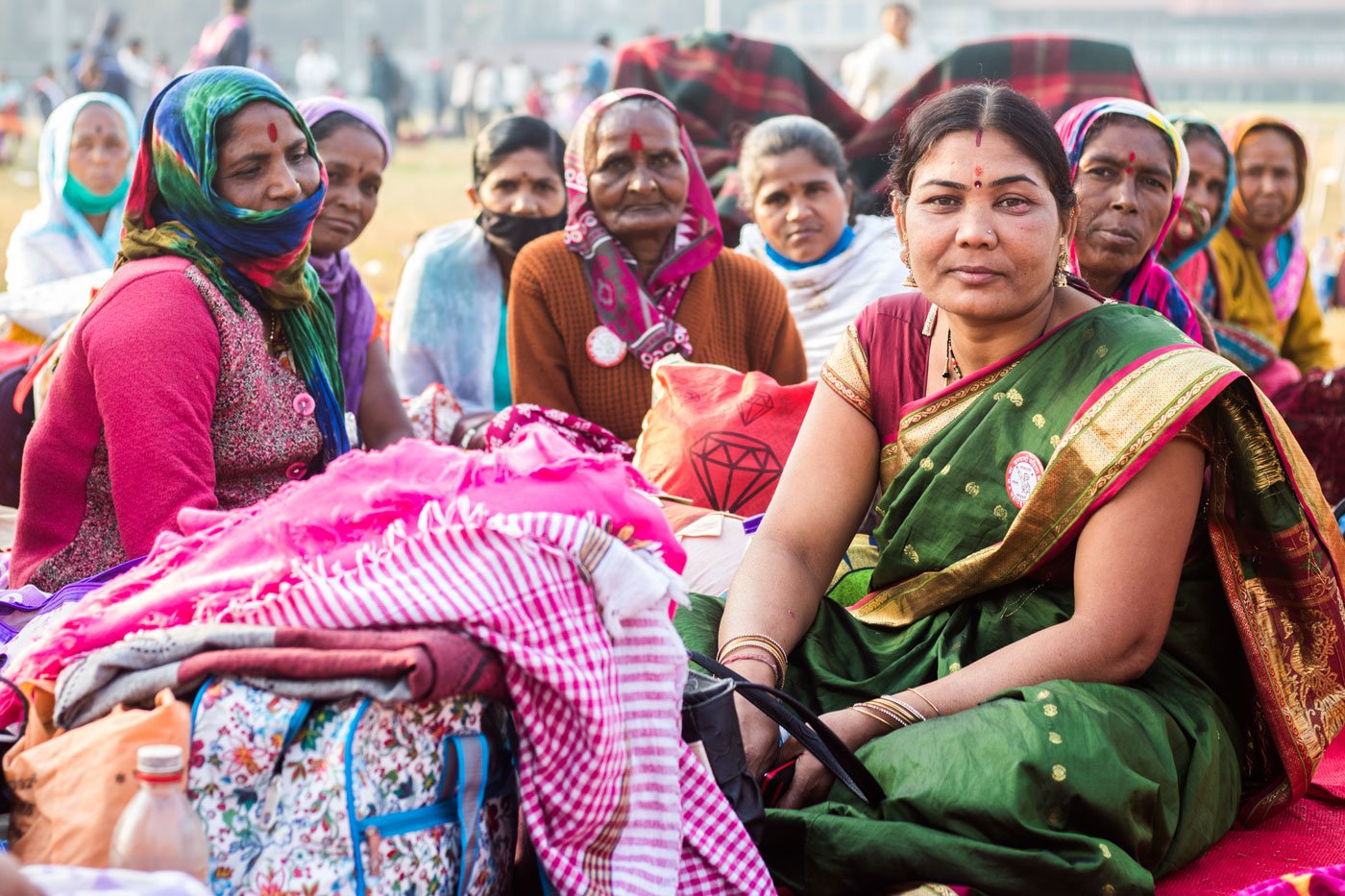 PHOTO • SANKET JAIN
Money is tight for women in Mohadi village. Their wages are less than the mens’. They get Rs. 150 for eight hours of work while men get Rs. 250 for the same work. “Even today, women are paid less than men for working much more. Why does the government think these [new farm] laws won’t affect women farmers more?” asks Laxmibai.

To protest against the new farm laws, Laxmibai and Vijabai had both come to Azad Maidan in south Mumbai for the sit-in organised by the Samyukta Shetkari Kamgar Morcha on January 24-26.

Over 15,000 farmers from villages across Nashik and nearby districts had left in tempos, jeeps and pick-up trucks on January 23 and reached Mumbai the next day. At the maidan , they expressed solidarity with the farmers protesting at Delhi’s borders against the new farm laws, and also demanded their land rights. “We don’t fear the government. We took part in the march from Nashik to Mumbai [in 2018], we’ve been to Delhi, and have protested more than two dozen times in Nashik and Mumbai,” said Laxmibai, raising her fist in a gesture of protest.

The new laws against which the farmers protesting against are The Farmers’ Produce Trade and Commerce (Promotion and Facilitation) Act, 2020 ; The Farmers (Empowerment and Protection) Agreement on Price Assurance and Farm Services Act, 2020 ; and The Essential Commodities (Amendment) Act, 2020 . They were first passed as ordinances by the central government on June 5, 2020, then introduced as farm bills in Parliament on September 14 and hastened into Acts on the 20th of that month.

The farmers see these laws as devastating to their livelihoods because they will expand the space for large corporates to have even greater power over farmers and farming. The laws also undermine the main forms of support to the cultivator, including the minimum support price (MSP), the agricultural produce marketing committees (APMC), state procurement and more. They have also been criticised as affecting every Indian as they disable the right to legal recourse of all citizens, undermining Article 32 of the Indian Constitution.

When private buyers procure produce below the MSP, it affects both farmers and agricultural labourers, said Laxmibai. “If a farmer gets a good price, only then will they earn and pay labourers.” With these laws, she added, “More private companies will increase in the market. Aamhi bhaav karu shaknar nahi [We won’t be able to negotiate the price].” 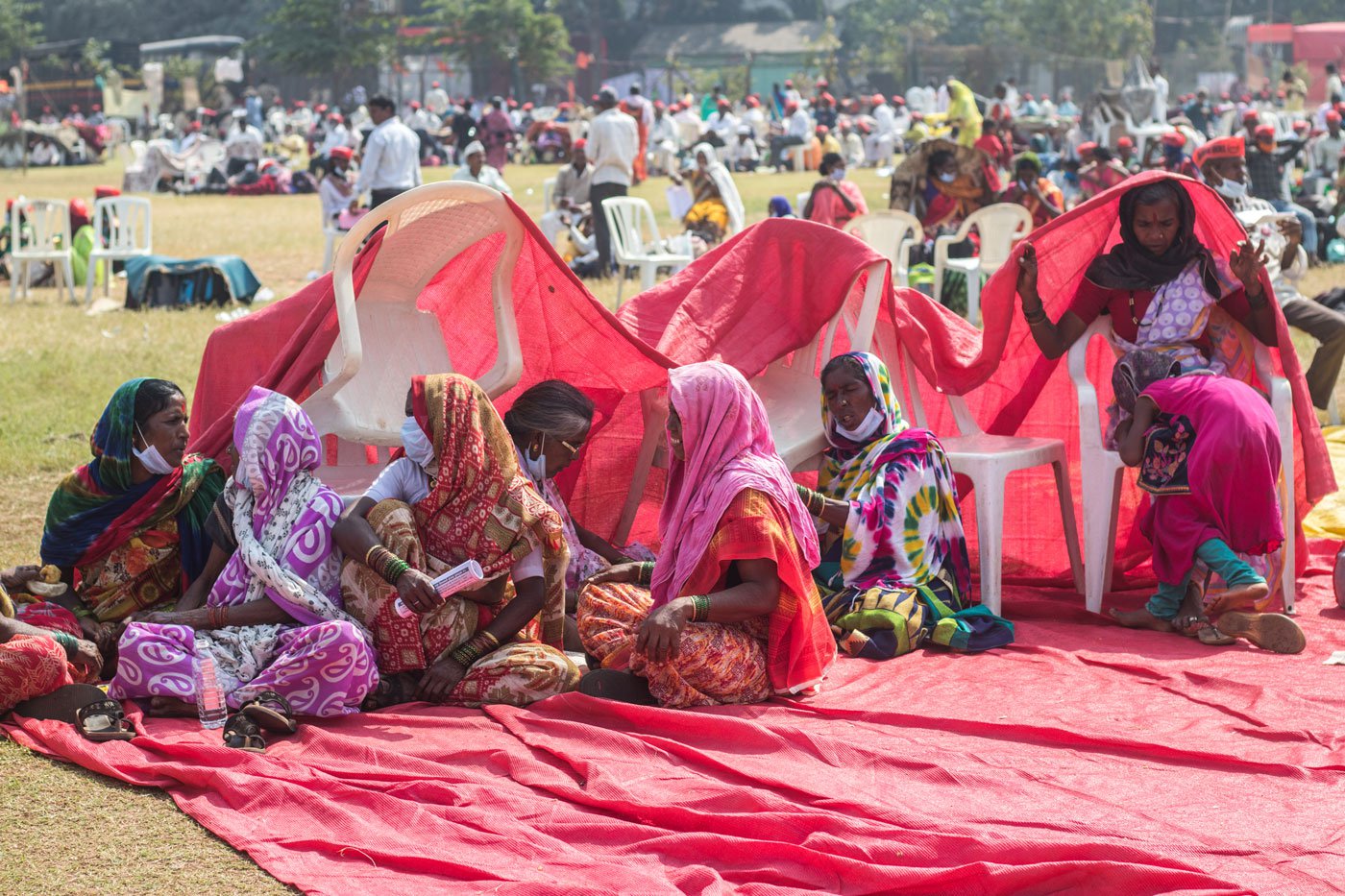 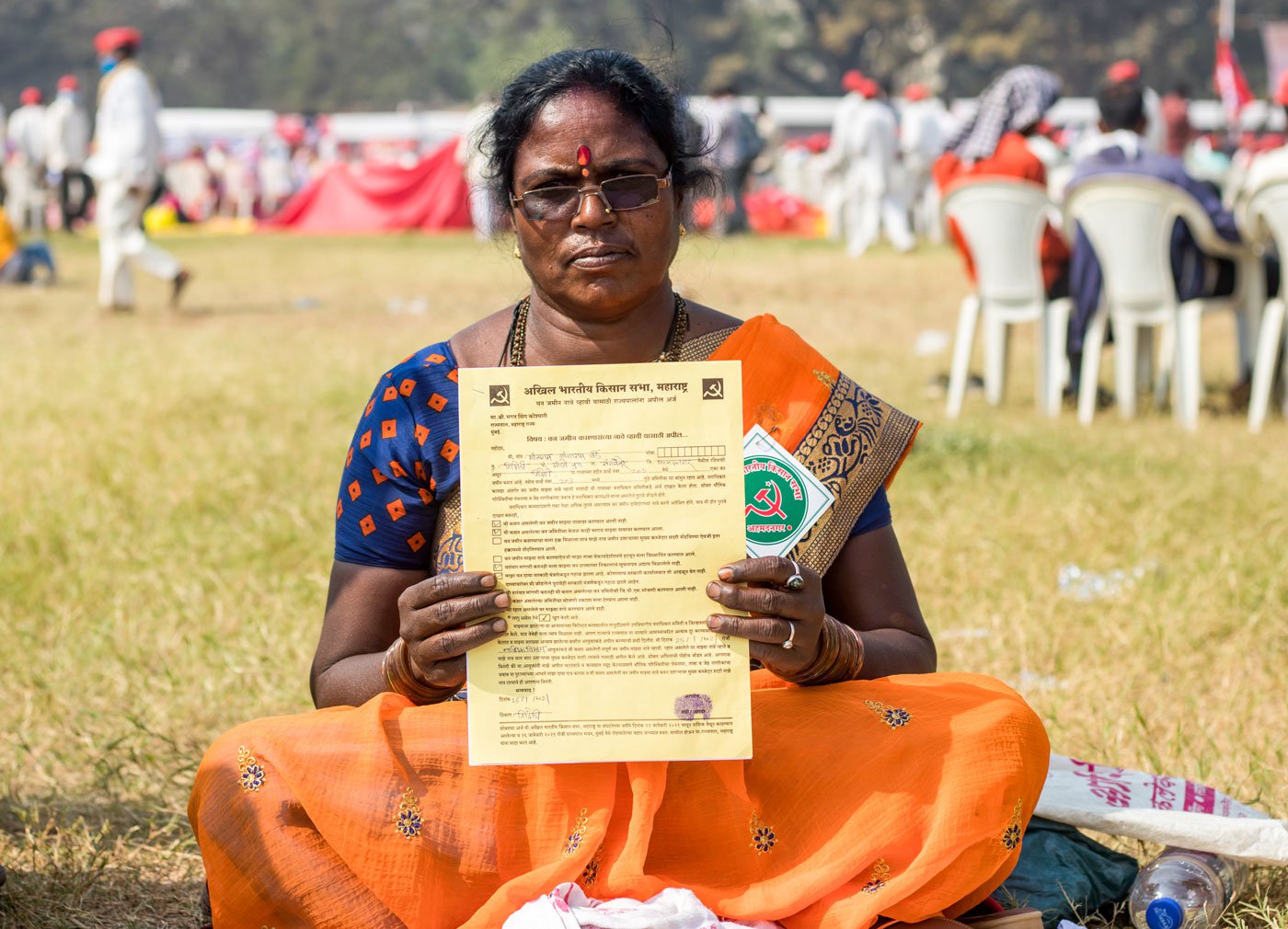 Left: Protestors in Azad Maidan protect themselves from the hot sun. Right: Mathurabai Barde holds up the charter of the farmers’ demands

At the Azad Maidan protest, Suvarna Gangurde, 38, from Korhate village in Dindori taluka , agreed that women would be among the worst affected by these laws. “About 70-80 per cent of farming is done by women,” said Suvarna, who belongs to the Koli Mahadev Adivasi community. “But look at the PM-Kisan Yojana. None of that money is deposited in any woman’s bank account in our village.” The yojana , a central government scheme, entitles small and marginal farmers to receive Rs. 6,000 every year as income support.

According to Suvarna, out of the 64 Adivasi families in Korhate village, only 55 were given ‘7/12’ (record of land rights) in 2012, under the Forest Rights Act, 2006 . But the records include the shera (remark) –potkharaba jameen (uncultivable land). “We are the third generation farming on this land, so how can they say it’s potkharaba jameen ?” she asks.

Suvarna grows tomatoes, bhuimug (groundnut), coriander, dill leaves, spinach and other leafy vegetables on the five acres of land she cultivates. She only owns two acres, even though she is entitled to the rest. “Fasavnuk keleli aahe [We have been fooled],” she said.

Despite seeking land titles in their name, Korhate’s Adivasi farmers were given a joint 7/12. “Because of theshera , we can neither get crop loans nor dig a well or borewell in our farms, which stops us from storing rainwater. We can’t even dig a farm pond,” added Suvarna.

From Korhate, 50 farmers and agricultural labourers came to Mumbai to join the protests. Of them 35 were women.

The protesting farmers had decided to go to Raj Bhavan, the residence of Maharashtra’s governor, in south Mumbai, on January 25. They wanted to submit a charter of their demands seeking a repeal of the three farm laws; procurement of crops at MSP; land titles in their name; and a withdrawal of the four labour codes introduced in 2020. 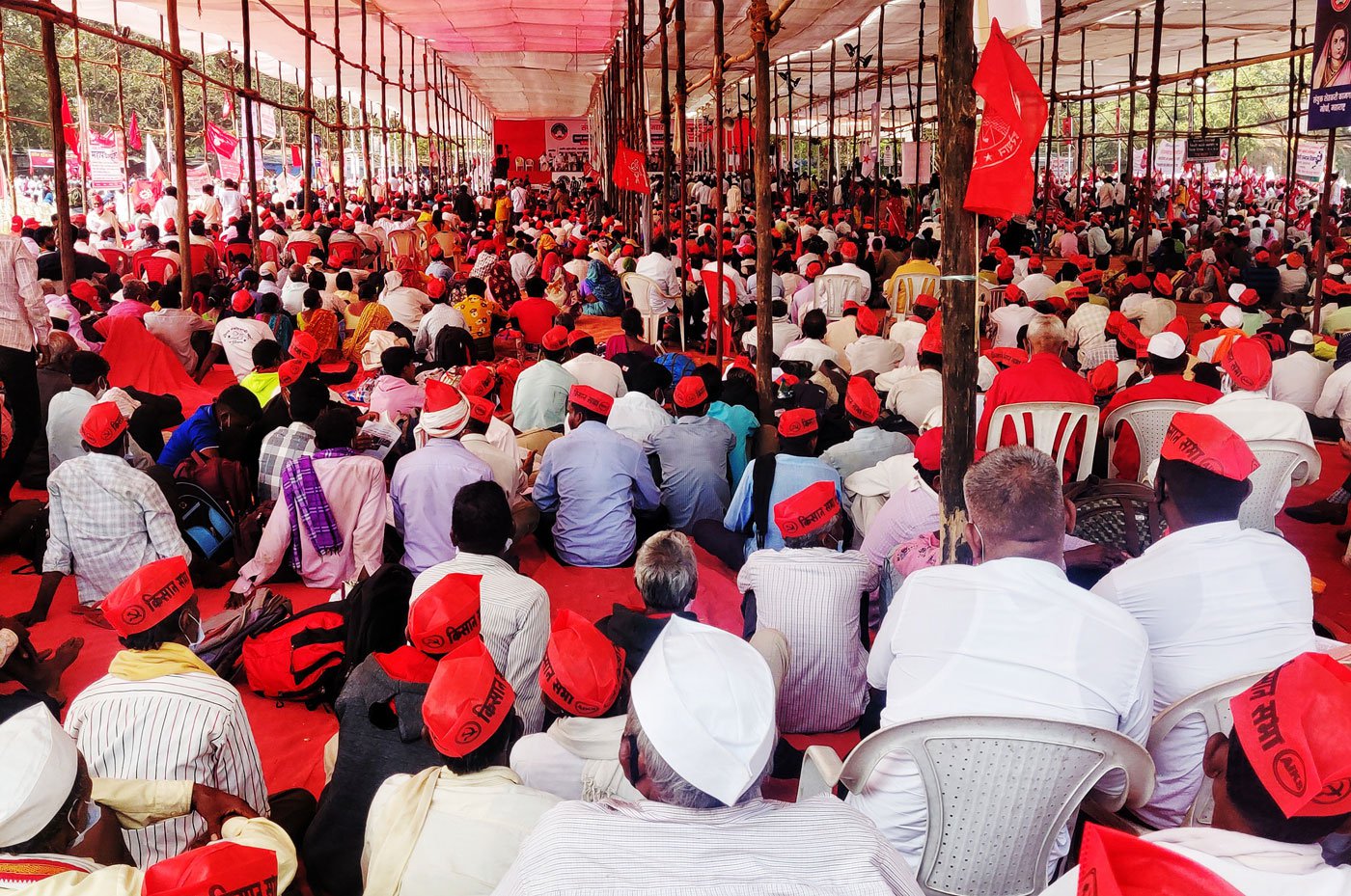 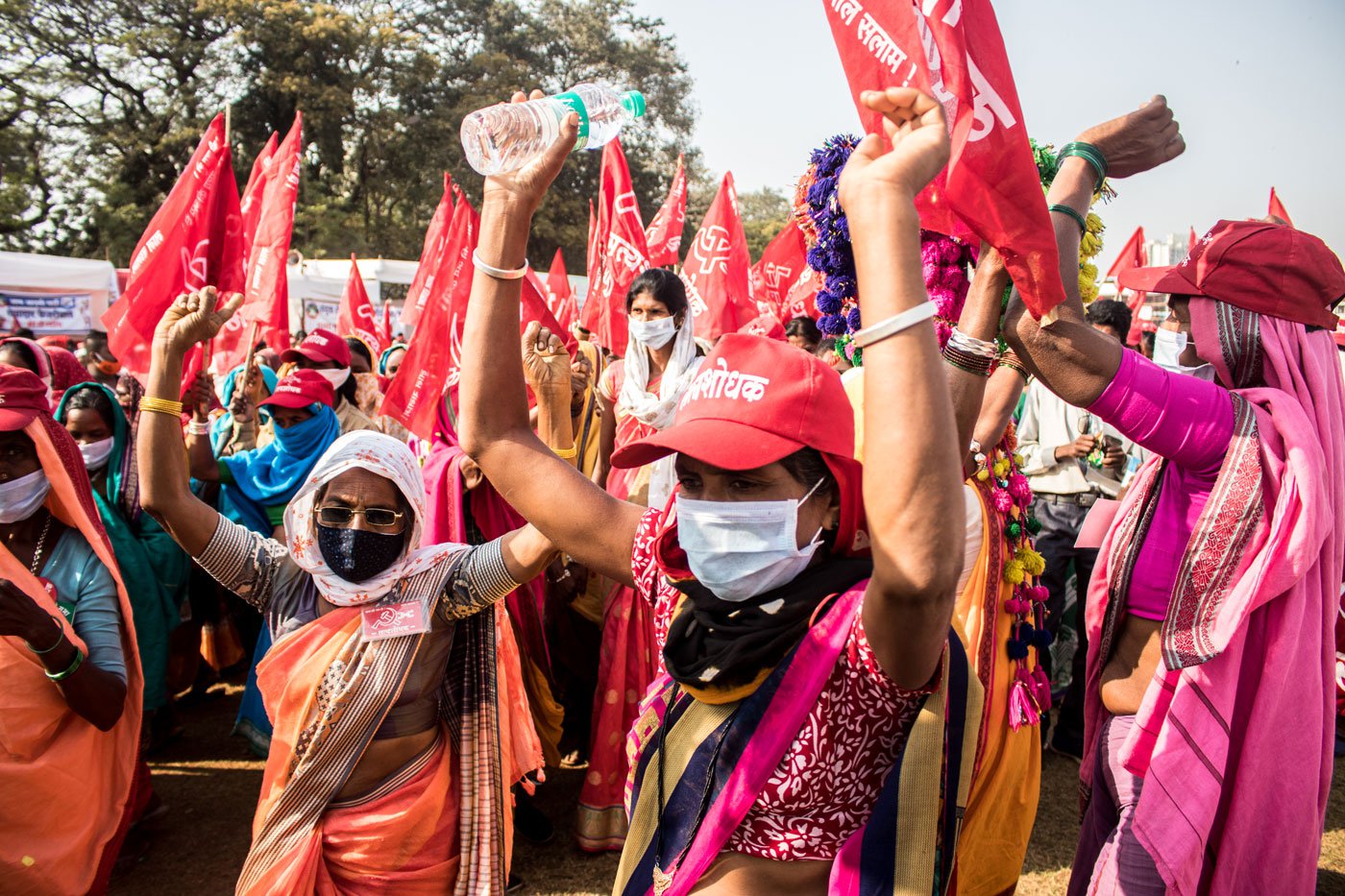 Before the march to Raj Bhavan, Mathurabai Barde, a 45-year-old Bhil Adivasi farmer from Ahmadnagar district, was busy scanning several yellow-coloured forms. Drawn up by the All India Kisan Sabha, which had brought the protest together at the maidan , the forms contained a list of common problems faced by farmers. The list included problems like ‘The 7/12 of the land which I cultivate hasn’t been given to me’; ‘Only a certain part of the cultivated land has been given to me’; ‘Instead of giving me the land title, the authorities told me to vacate the land’.

Each farmer had to select the issues they faced, and the completed forms were to be handed over with the charter of demands to the governor. Mathurabai was making sure that all the women farmers from her village, Shindodi, in Sangamner taluka , filled up their form correctly. She kept checking her handwritten list of farmers’ names to verify that each had written their details properly.

Back in her village, Mathurabai cultivates 7.5 acres of land. Her recent experience with private traders has made her more determined to protest against the new laws. The traders paid her Rs. 900 for a quintal ofwheat, she said, which was far less than Rs. 1925 – the approved MSP for wheat in 2020-2021. “They sell the same wheat to us in the market at thrice the price. We are the ones who grow it, and still we are asked to pay much more,” said Mathurabai.

The farmers’ march to Raj Bhavan on January 25 was cancelled because the Mumbai Police denied permission. Angry that they could not meet the governor, Mathurabai said, “We won’t stop fighting. It is we who grow the crops for everyone, including the governor and the prime minister.”

This was first published by the People’s Archive of Rural India.